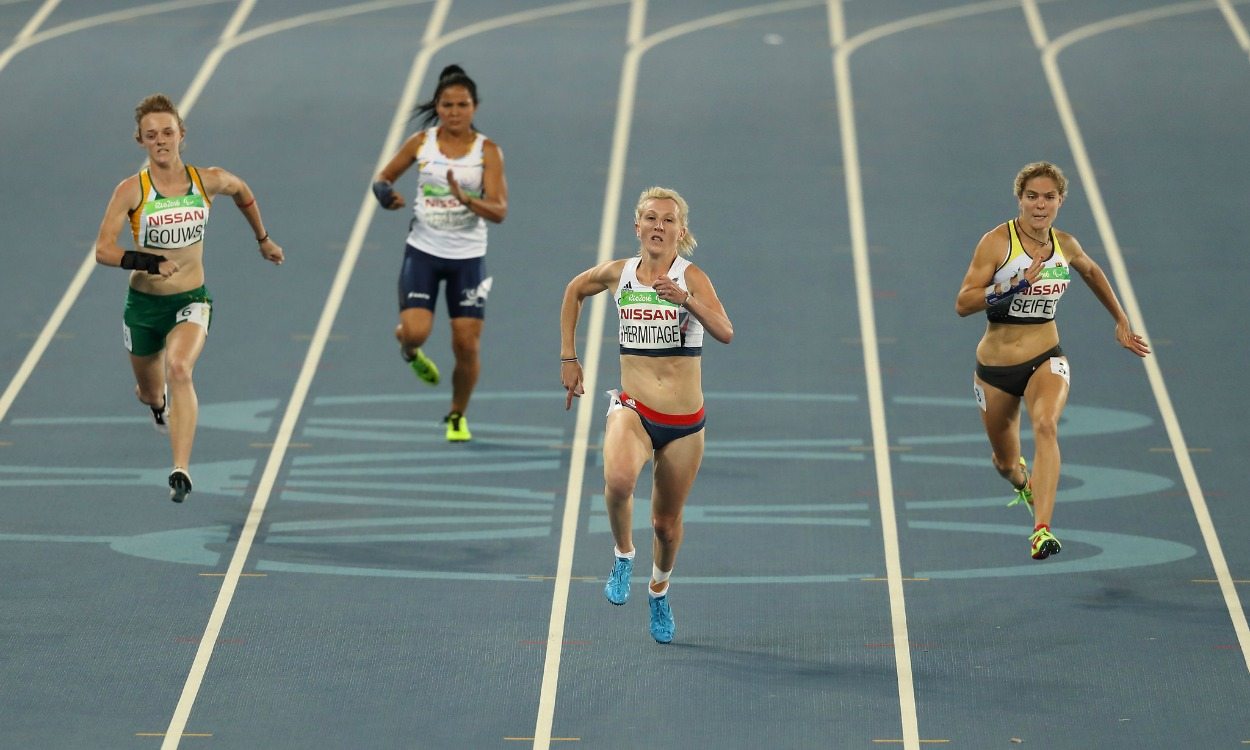 Britain’s Georgie Hermitage equalled her own T37 100m world record to storm through to Friday’s final, the four-time European and 400m world champion clocking 13.39 in her heat on the first evening of athletics action at the Rio Paralympic Games.

Never challenged, the 27-year-old smashed the Paralympic record of 13.69 which had been set by France’s Mandy François-Elie in the heat before, and that had improved on the 13.88 Paralympic record set by Australia’s Lisa McIntosh in 2000.

“That was really good for me and calmed my nerves,” said Hermitage. “I’m really happy with the time.

“Considering the last couple of months of niggles coming into this, I was worried at times that I wouldn’t even make it here. But that time bodes well for the final.”

Hermitage’s team-mate Sophie Hahn was another athlete to come close to a world record as she clocked 12.62 in the T38 100m heats for a time just 0.02 off her own record mark, obliterating the Paralympic record of 13.43 set in 2008.

Hahn’s fellow Britons Kadeena Cox, who contests both athletics and cycling events in Rio, and Olivia Breen also qualified for the final on Friday with a PB of 12.98 and a time of 13.35 respectively.

Jonnie Peacock had broken the Paralympic record to claim T44 100m gold in London four years ago and the Briton improved that mark in Rio, but this time in his heat.

Clocking 10.81 the 23-year-old dominated to book his spot in Friday’s highly-anticipated final where he will line up against USA’s former world record-holder Jarryd Wallace and New Zealand’s Liam Malone, who finished fast to pip the American in the second heat, 10.90 to 11.02. As a T43 athlete racing the T44 event in Rio, Malone’s time improved the Paralympic record which had been set by Oscar Pistorius in 2008. Brazil’s world T43 record-holder Alan Oliveira just missed out on making the final in front of home fans.

“I’m reasonably happy with the 10.81,” said Peacock. “It’s my second fastest time of the year so can’t ask for much more than that.

“It felt relatively easy – I know I’m in great form coming here and that’s what this whole year is about.”

Fresh from breaking her own T53 100m world record earlier on in the day with 16.19 in the heats, five-time Paralympic gold medallist Huang Lisha claimed a dominant victory in the final, clocking 16.28 to lead a China 1-2 ahead of three-time gold medallist Zhou Hongzhuan with a 16.51 PB.

Australia’s five-time Paralympic medallist Angie Ballard, competing at her fifth Games, claimed bronze, crossing the line in 16.59, while Britain’s triple European champion Samantha Kinghorn was fifth in 17.13 after clocking 17.01 to finish behind Huang in her heat.

Germany’s Niko Kappel won F41 shot put gold, beating Poland’s world record-holder Bartosz Tyszkowski by just a single centimetre, a 13.57m PB to 13.56m to miss the record mark by seven centimetres. With a best of 11.41m from the second round, GB’s four-time world medallist Kyron Duke placed fifth and will return on Sunday to contest the javelin

London 2012 fourth-placer Khusniddin Norbekov claimed Uzbekistan’s first ever Paralympic athletics title with a win in the F37 discus, adding almost six metres to his PB with a world record-breaking throw of 59.75m. That mark added almost four metres to the previous world record which had been set by China’s Xia Dong in 2012 and in Rio he had to settle for bronze with a best of 52.15m behind Mindaugas Bilius of Lithuania’s 53.50m PB.

Victory in the women’s F57 shot put went to Mexico’s Angeles Ortiz Hernandez as she threw 10.94m in the third round.

USA’s Tatyana McFadden contests seven events in Rio and she raced in the heats of the first, the T54 100m, on day one of competition, clocking 16.52 to finish as runner-up to China’s world champion Liu Wenjun with 16.00. In third was McFadden’s sister Hannah with a 16.55 PB to also progress.

Jason Smyth is the world’s fastest Paralympian and the Irish sprinter proved his winning intentions in Rio with an easy T13 100m heat victory in a time of 10.76 to qualify for Friday’s final, where he will attempt to claim a fifth Paralympic gold.