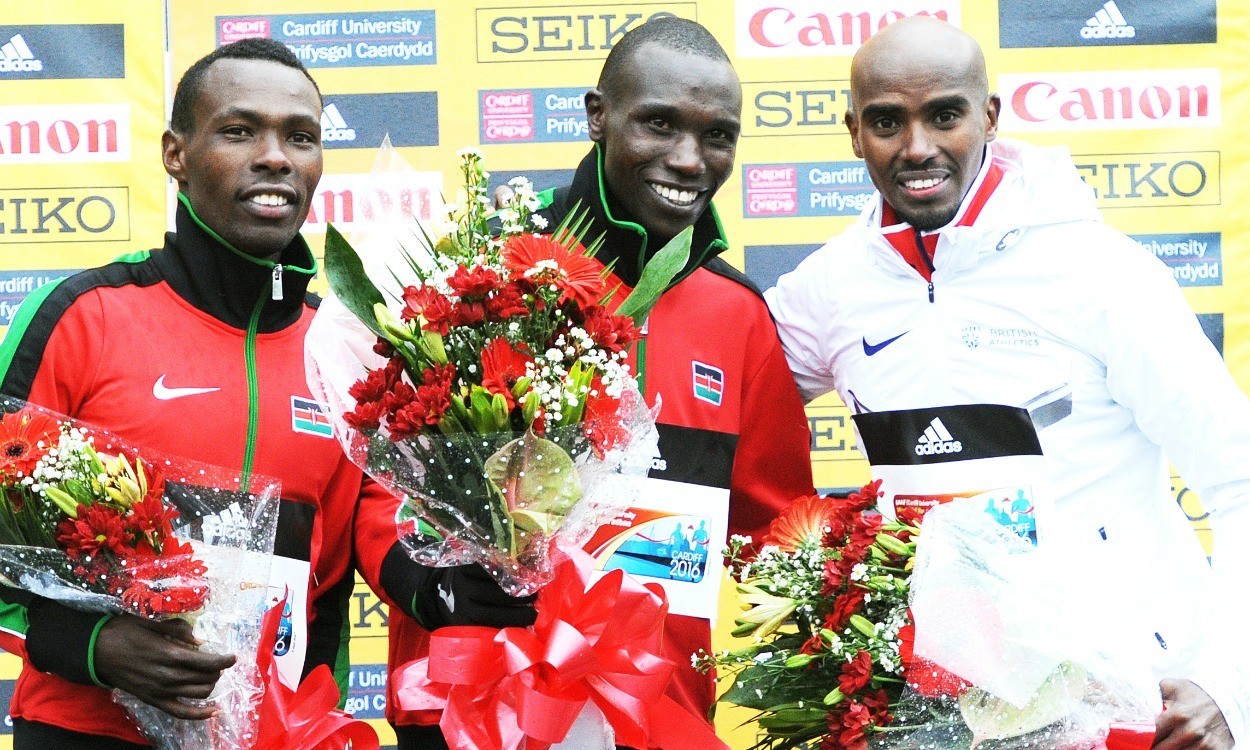 Geoffrey Kamworor successfully defended his IAAF World Half Marathon Championships title as he overcame a fall at the start of the race, horrendous weather conditions and a top field to become just the third athlete to win the men’s event more than once.

The world cross-country champion led a Kenya top two, as Bedan Karoki secured silver in a wet and windy Cardiff, while Britain’s Mo Farah won the battle for bronze after a thrilling sprint finish in front of home fans.

Kenyan athletes also dominated the women’s race in the Welsh capital, with Peres Jepchirchir leading a clean sweep of the medals ahead of her two more experienced team-mates Cynthia Limo and Mary Wacera.

Prior to the championships – which were being held in Britain for the fourth time after Newcastle in 1992, Bristol in 2001 and Birmingham in 2009 – Kamworor had spoken about targeting the world half-marathon record of 58:23 set by Eritrea’s Zersenay Tadese in 2010. Despite damp and blustery conditions, the world record hadn’t been too far away, with athletes just 14 seconds off world-record pace at around the 15km mark.

But after surging away from Karoki in the closing stages, Kamworor’s battle was with the weather as he ran on through a heavy downpour and crossed the finish line with 59:10 on the clock, a gold medal and bloody knees to show for his efforts.

“I was trying to get up, but people kept coming from behind,” Kamworor said of his fall. “It was very difficult.”

The winner added: “I said to myself after the start ‘I am not going to give up’.”

With non-elite runners starting just behind the elite men’s field, Kamworor had to weave his way through the mass race to catch up with the leaders. His start was captured from a runner’s perspective by Oli Williams and you can watch it via the video below.

Until Cardiff, Karoki had been unbeaten over 13.1 miles and he had gone to the front in the early stages and remained to the fore. The 5km mark was passed by the lead group in 14:10, with Farah just a second behind.

Karoki and Kamworor were together at 15km, where the clock said 41:41 and, after being 20 seconds off his British record at 10km, Farah pushed harder over the next 5km to break the European 15km record with his time of 42:03 at that point to sit sixth.

As the race progressed, although it seemed set where the top two medals were going to go, the battle for bronze was on as Farah formed part of a group also including Ethiopia’s Abayneh Ayele and Tamirat Tola to pass Kenya’s Simon Cheprot.

While Kamworor again denied Karoki a world title win, as he did in Guiyang on the country last year, double Olympic, world and European track champion Farah again demonstrated his trademark sprint finish to win a medal on his debut at this event to become Britain’s second men’s medallist in the history of this event after Carl Thackery in 1993.

Karoki’s silver medal-winning time was 59:36. Farah clocked 59:59 ahead of Ayele with the same finishing time, while Tola clocked 60:06. Ireland’s Paul Pollock was the next European athlete over the line with 62:46 for 14th, one place ahead of Britain’s Callum Hawkins with 62:51. Welshman Dewi Griffiths was the third GB athlete to finish, clocking a 64:10 PB for 27th and to help the host nation to place fourth behind Kenya, Ethiopia and Eritrea on the team standings.

Farah said: “At the beginning I was thinking there was no way they could keep this pace going so I was thinking ‘am I unfit or are they going pretty fast?’

Earlier on, Jepchirchir had run a well-judged race to lead Kenya to a second successive clean sweep, with the nation having claimed the top five spots in Copenhagen in 2014. 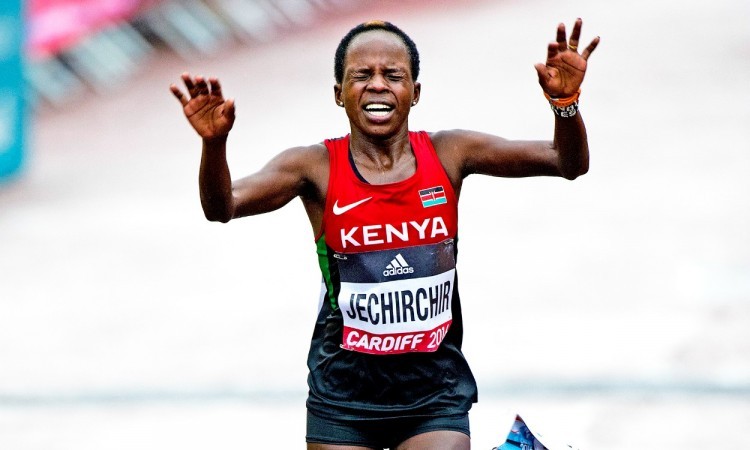 The nation was not quite so dominant this time around and throughout the race the lead was shared between Kenya and Ethiopia, with Netsanet Gudeta and national record-holder Genet Yalew taking the front group of seven through 10km in 32:34. By 15km, Kenya was again to the fore through Jepchirchir and Limo with 48:14 on the clock and it was that duo that began to forge ahead.

Jepchirchir had the stronger finish, though, and pulled away from this year’s world-leader to finish three seconds clear – 67:31 to 67:34 – with Wacera holding on for bronze as she crossed the line in 67:54. Gudeta was fourth in 68:01 and Yalew fifth in 68:15.

First European athlete to finish was Italy’s Veronica Inglese as she placed 16th in a time of 70:59.

“The first 5km was spot on. I was going along feeling comfortable on the pace I felt I was capable of,” she said. “I had a drink at 5km and lost 10 yards and then I was running by myself and couldn’t get them back. 10km was 30 seconds down on what I wanted it to be, but still within PB pace. It just got tougher and tougher from there.

“Training has been going really well, so I’m not going to get worked up,” she added.

Charlotte Purdue ran 73:20 for 33rd, while Tina Muir, who replaced Gemma Steel after her withdrawal through illness, finished 49th in 75:12.

Behind Kenya’s team gold, Ethiopia secured silver ahead of Japan, with the country claiming women’s team bronze medals for the ninth successive edition of these championships.

After his brother’s 15th place finish in the elite race, Derek Hawkins was the first to cross the line from the mass runner section, clocking 65:00, while on the women’s side it was Charlotte Arter with 73:20 on her debut.

» See next week’s Athletics Weekly magazine for much more in-depth coverage, including reports, pictures and results from Cardiff