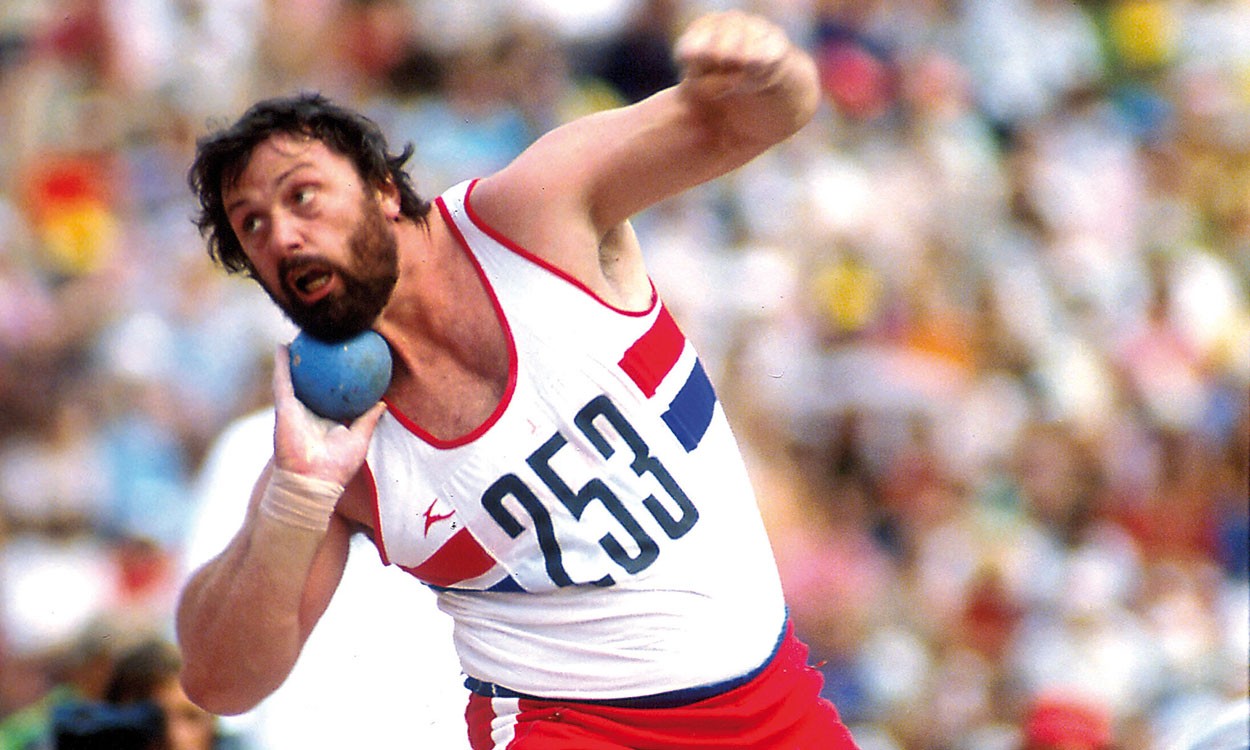 For many people, the name Geoff Capes will always conjure up the image of an almost superhuman figure, putting a shot to ever greater distances on the global stage before transforming himself into a multi-award winning professional World’s Strongest Man.

The three-time Olympian, who went into the 1976 Montreal and 1980 Moscow Games the favourite for the gold with world-leading throws of 21.55m and 21.68m respectively, only to leave empty handed, dominated the sport for more than a decade.

His throwing success had humble beginnings, though, as he learnt how to lift when working on the Lincolnshire farming fens alongside his father and eight siblings where he grew up, before combining a police career with his athletics triumphs, followed by another decade of success as a professional strong man in the 1980s.

He was already familiar with success before he started dominating the shot put arena, as in 1977 he was awarded the Queen’s Jubilee medal for services to the community in his capacity as a policeman.

However, Capes feels he missed out on an even greater honour because of his strong principles.

“I think I might possibly be the only athlete to win so many athletics awards, and be world champion in three different sports, not to be awarded an MBE, but I am sure it is due to the fact I took a stand against Margaret Thatcher in 1980 to enable athletes to compete in Moscow, in so sacrificing my police career.”

The 66-year-old former UK shot put record-holder, who still stands at second on the all time rankings behind Carl Myerscough’s 21.92m, is now a successful shot put coach, guiding a number of young athletes to national and international glory. 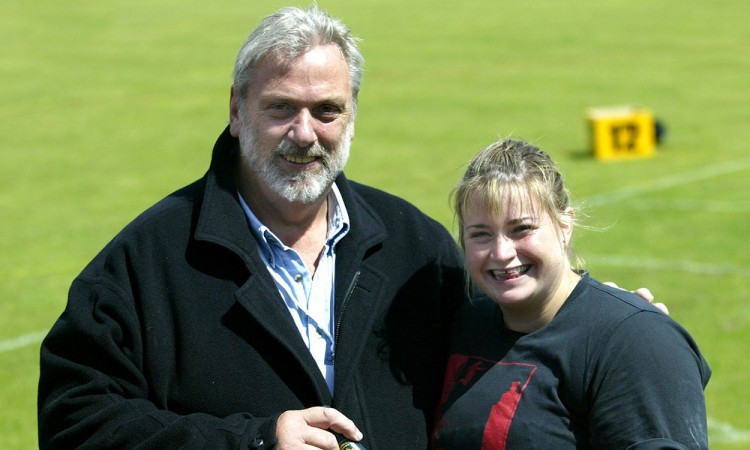 Drawing on his vast international competition experience – Capes is the most capped GB athlete of all time, with 35 wins from 67 appearances – the six time Highland Games champion and former world record-holder has helped a stream of throwers to develop into major championship performers.

The man once voted Britain’s best ever field athlete is now based in Stoke Rochford, near Grantham, where he lives with his partner, Kashi, and scores of prize budgerigars. A passion for breeding the small birds has seen him crowned the society’s president, as well as winning the world showing title, during his 30 year-long fascination with the creatures.

When he’s not in his aviary, fishing, or spending time with his family, Capes can be found at Rhino’s Gym in Stamford guiding his athletes’ strength and conditioning programmes, or at Stoke Rochfold Hall’s throwing facility, where he coaches a group of rising shot put stars, including the current under-15 record holder and English Schools champion, Nene Valley Harrier Hannah Molyneaux.

The 1986 UK truck pulling champion said of his young charges: “I have many up and coming bright prospects, with Hannah one in particular to watch for the future, at national and international level. It’s a great coaching set up at Stoke Rochford, with one of the best settings in the UK, and was built by the athletes, for the athletes I coach.”

Capes has also developed the Lincolnshire Throws Academy for shot and discus in Holbeach, and his coaching protege and assistant, Paul Wilson, has gone on to guide Scott Lincoln to the number one spot in the national senior ranks, along with numerous other successes.

Rebecca Peake (pictured with Capes above, PB 16.76m), Rachel Wallader (PB 17.42 and this year’s British senior champion) and Sophie McKinna (multiple GB vests with a PB of 17.12, national under-23 champion this year) were all coached to a high level by Capes before they moved on, and a number of his other athletes currently ranked in the top 10 in the UK are hoping for similar success, including Sebastian Dickens (5th U15), Kionna McLennon (9th U17), Danielle Opara (8th U23), and Jamie Stevenson (7th in the senior rankings).

The former strongman, who twice held the global title along with a plethora of British and European victories, acknowledges his long and successful career has given him plenty of sources of inspiration to help guide his own athletes.

“I ended my career knowing I had been the world’s No.1 in three different sports, which proves the importance of setting goals and targets as soon as possible in any sporting career,” he explained.

“I never accepted second best, and this attitude enabled me to travel round the world, make many friends, and challenge the best.”

“I ended my career knowing I had been the world’s No.1 in three different sports, which proves the importance of setting goals and targets as soon as possible in any sporting career”

Capes is happy to pass on these valuable lessons to his group of talented throwers at every opportunity.

“I enjoy coaching anyone who wants my help, as well as developing and encouraging throwers to throw from the very start of their careers,” he explained. “I am always looking for that rare talent of an animal who has that something extra. I want to add, though, that Paul and myself have achieved our success of taking most of our athletes to national or international level without any help from the national athletics bodies.”

The 6ft 5in legend turned his attentions from entertaining the nation bending steel bars and tearing phone directories in half after his athletics career ended following his exit at the 1980 Moscow Olympics, where he finished fifth, to inspiring his son Lewis and daughter Emma to succeed in the shot themselves. Lewis’s PB of 16.55 set as an under-23 in 1991 would place him fourth in the country this year, while Emma’s best of 13.61 recorded the following year as an under-17 would rank her third in the UK for 2015!

The proud father added: “Lewis was also a strong rugby player and athlete at Millfield School before going to Denver University to play American Football, and Emma claimed victories at the English Schools and the national championships as well as a European Youth bronze in the shot. Between them they have now given me plenty of grandchildren, all of whom are already showing signs of being good sportsmen, particularly in rugby.”

Now his children are grown up, he is able to draw on the guidance from his own coach, Stuart Storey, and mentors who advised him throughout his career, including Tom McNab, Wilf Paish and Ron Pickering, in his role as a coach for future stars.

The man who inspired a computer game to be made in his honour in 1985 – the Geoff Capes Strongman game – which encouraged players to win at tug of war and truck pulling – is clear about how much influence Storey had on not only his shot put success, but also his life growing up in the fens.

He said: “Stuart came from the same town in Lincolnshire as I did, Holbeach. I was a problem child with challenging behaviour, and he rescued me from this, put me straight, and guided me through the early days.

“As an athlete himself, (Storey was an Olympic and Commonwealth Games 110m hurdler before taking up coaching and TV commentary), he encouraged and directed me in his coaching, as we learnt the event together. The rule was that he was the ring master, and I was the tiger from the fens, and initially a mascot for Holbeach athletics club.

“I was very fortunate to have Stuart at most of my internationals, in his capacity as a BBC commentator alongside Pickering and David Coleman – he was a great motivator, and I had the talent to win, which was a great combination.

“We still contact each other nearly weekly and I continue to ask him for his wisdom and guidance!”

“I enjoy coaching anyone who wants my help, as well as developing and encouraging throwers to throw from the very start of their careers”

Today Capes is glad of the company of two other great throws coaches, Mike Winch and John Hillier, both of whom he competed against decades ago, adding “between the three of us we keep producing some very good athletes.”

The UK record-holder between 1980 and 2003 may lead a more down to earth life now consisting of coaching 20 hours a week over five sessions in the throws cage and the gym, alongside his ‘strict breeding and training regimen’ for the budgerigars, but he hasn’t forgotten some of the lighter highlights of his athletics career spent travelling the globe.

The man who threw over 21 metres on more than 20 occasions is also famed for having beaten one of the all-time distance running greats, Brendan Foster, at his own game, as well as two incidents involving illicit parties and royal mishaps.

Capes explained with glee: “It is a true story that I beat Foster over 200m on two occasions, once at Gateshead on his home ground, and again on my own territory in Spalding! Another amusing story revolved around myself and two other athletes hiding all the officials’ free alcohol at the Munich Olympics, allowing us to have a great post-games party.

“Finally, I will always remember being presented with the top athlete award by the Queen at one of the Highland Games I won in Braemar, and my hand completely sticking to hers for some reason!”

His double victory over Foster is perhaps less surprising considering his ability to run 100 metres with a 400lb fridge on his back in his Strongman days!

Returning his attentions to today, Capes is happy to continue to guide many more athletes to shot put success, alongside pursuing another global title of his own – in the budgerigar world championships.

Tags: Geoff Capes, Photograph by Mark Shearman, Where are they now?