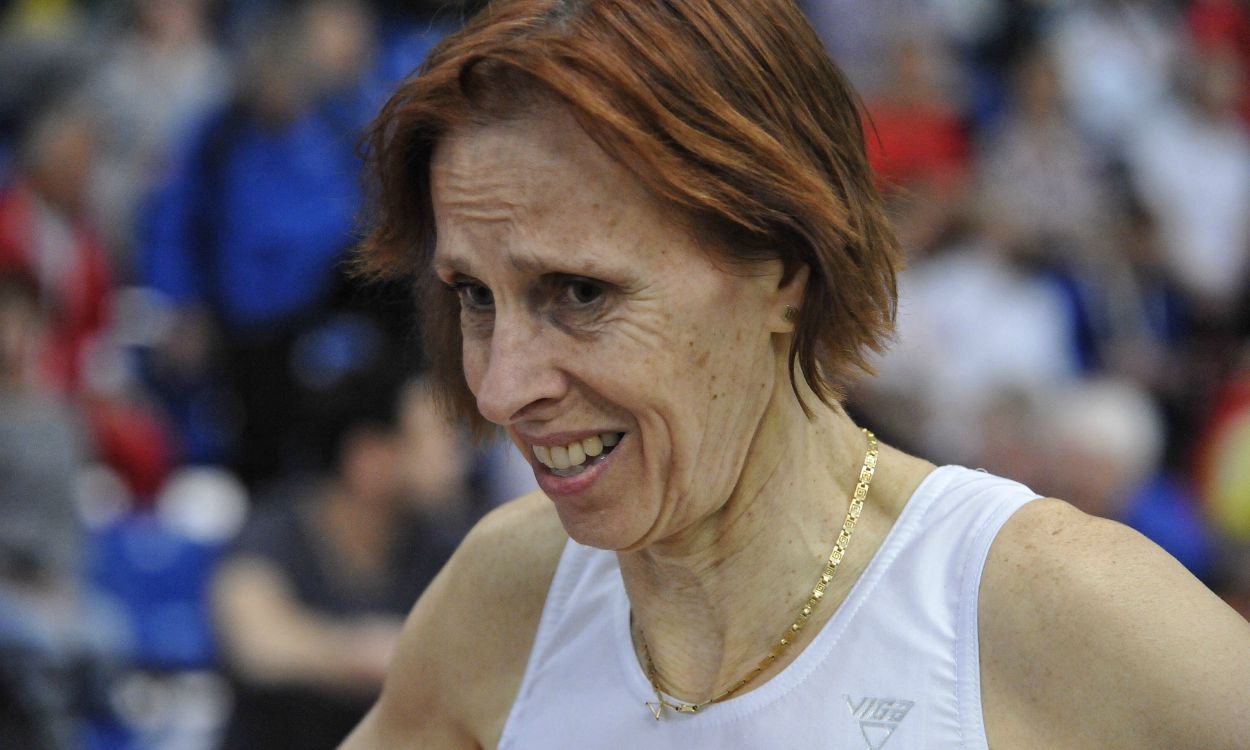 Great Britain had an excellent morning in the 400m races on the penultimate day of the World Masters Championships in Lyon, winning five golds and 15 medals in total.

Their best event was the M35 400m where the Brits gained a clean sweep with Richard Beardsell winning in 49.18 with Lawrence Baird second in 49.40 and David Brown third in 49.54.

There was a one-two in the M60 400m as Steve Peters won his third sprint title in 55.86, despite an Achilles problem, while Alasdair Ross pushed him all the way with a 56.53.

Kathy Stewart set a British record and came close to the world record as she won the W75 event in 85.74. She tied up in the closing stages as did W60 winner Caroline Powell (pictured).

Powell had set a world record in her heats and was going much faster until suffering in the final 30 metres.

Another British champion was Susie McLoughlin. She won the W35 easily in 58.25 with Susan Young third in 59.07. 800m champion Ros Tabor did well after finishing second in the previous night’s W65 1500 to set a PB 74.13 in finishing second to Australian Evelyn Peake’s 72.46.

Nina Anderson was a disappointed third in the W40 400m with 58.02 behind Guyana’s Alisha Fortune while Virginia Mitchell was much happier with her 62.14 run for silver in the W50 event.

Australia’s M80 David Carr followed up his 1500m win yesterday with another gold in 78.47.

Ahead all the way, the lead was narrow until McMahon extended it by a few more metres over the last two hurdles.

John Mayor was a close second in the M55 hurdles in 15.21, a position matched by M65 Tony Wells, who ran 16.66, a second down on winner Valeriy Davydov of Russia.

Australian Marie Kay, who set a heptathlon record in winning gold and won the 300m hurdles title and medalled in the sprints, won the W55 80m event in 13.03 with Britons Jane Horder and Susan Frisby both medalling, close behind. Horder ran 13.17 and Frisby 13.30.

Liam Collins was third in the M35 hurdles in 14.64 behind Japan’s Hiroyuki Fukuda’s 14.05 while a not at full fitness Joe Appiah did well to pick up M45 bronze in 15.06. Former Commonwealth champion Shaun Bownes was second.
M50 Donald Brown was in contention for a medal but fell.

Muller backed up his 400m win from earlier in the day with a faultless display in the M75 80m hurdles and he won in an European record 14.20.

In the W80 80m hurdles, Irene Obera of Portugal hurdled superbly for a woman of her age and won in a world record 19.32.

On Friday, there was a previously unreported silver in the M70 20km walk for Britain’s Kenneth Bobbett in 2:11:01.0.

» A round-up of the first few days of action can be found here, while further results, including Anthony Whiteman’s 800m win, can be found in a report here. There are details of world record-breaking performance by Glyn Sutton and Caroline Powell in a round-up report here. News of 800/1500m doubles by David Heath, Whiteman and Louise Rudd is here. The event takes place from August 4-16