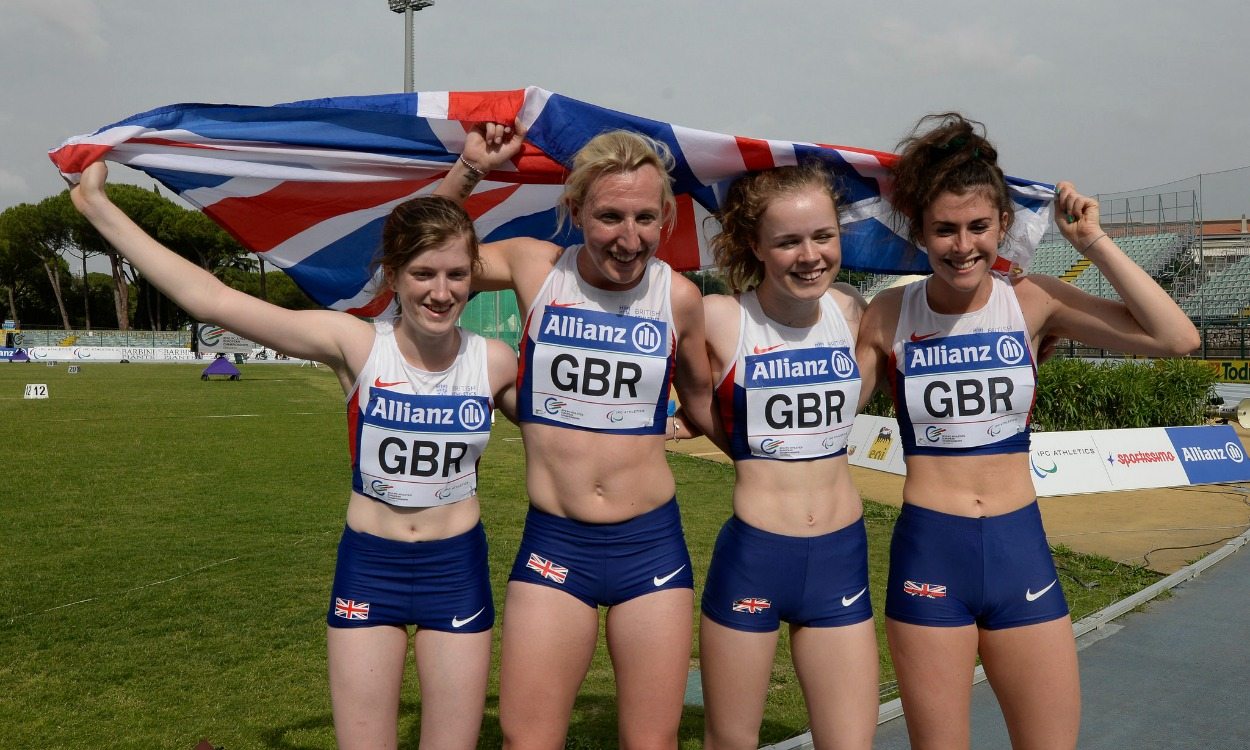 The British team claimed a total of 56 medals in Grosseto, with a world record-breaking 4x100m performance among the action on the final day of competition

On the final day of action at the IPC Athletics European Championships in Grosseto, Italy, the Great Britain team improved on the previous highest number of medals won at the event, recorded in Swansea two years ago, to 56 medals overall.

The women’s T35-38 4x100m relay team produced one of the performances of the championships to claim gold, setting a world record of 51.63 to dip below the mark run by a Chinese quartet earlier this year. Olivia Breen, Maria Lyle, Georgie Hermitage and Sophie Hahn combined to claim the relay title back off the Russians who won two years ago.

Four-time European gold medallist Hermitage set her third world record of the week in the race and said afterwards: “I enjoyed the bend but it may not have been the smoothest changeovers by me and Maria but we have a great relationship and it is something we can work on. We still broke a world record and you could see that there is so much to come.”

Meanwhile, David Weir won his fourth gold of the championships in the T54 1500m, clocking 3:18.50 to win by just 0.03. It was a confident last 100m from the six-time Paralympic champion who used all his experience to hold off his opponents.

“It was quite slow for me but I was alright, I knew I had it covered,” he said. “I had to go the long way round but it was a good race.”

Weir was also part of the winning British team in the non-medal T53/54 Men’s 4x400m relay, and along with trio Richard Chiassaro, Nathan Maguire and Mo Jomni clocked 3:08.30 for a British record.

Isaac Towers completed a full set of medals with gold in the T34 800m. After winning silver and bronze medals earlier in the programme, Towers out-sprinted multiple global medallist Henry Manni of Finland and clocked a 1:44.67 championship record.

His compatriot Ben Rowlings claimed his second bronze medal of the week in the same race with a time of 1:49.14.

Upgrading from her bronze in Swansea, Laura Sugar claimed silver in the T44 100m, while earlier on in the day Graeme Ballard secured silver and Joshua Bain bronze in the T36 200m.

There was further medal joy in the F37 discus throw as Bain claimed bronze, while Joshua Howard made an encouraging international debut in the T38 long jump, finishing third but with no medal awarded.

“I am delighted with our record-breaking results here at the IPC Athletics European Championships, with experienced athletes such as David Weir and Richard Whitehead performing like the champions we know they are, and a lot of young and upcoming athletes stepping up on the European stage,” said head coach of the Paralympic programme, Paula Dunn.

“This event has been a great stepping stone as we head towards Rio and also as we look towards the World ParaAthletics Championships in London next year and the Tokyo Paralympic Games in 2020.

“Not only have we won a significant number of medals this week but we have also introduced a lot of new faces who will learn from this experience and progress in their development.”