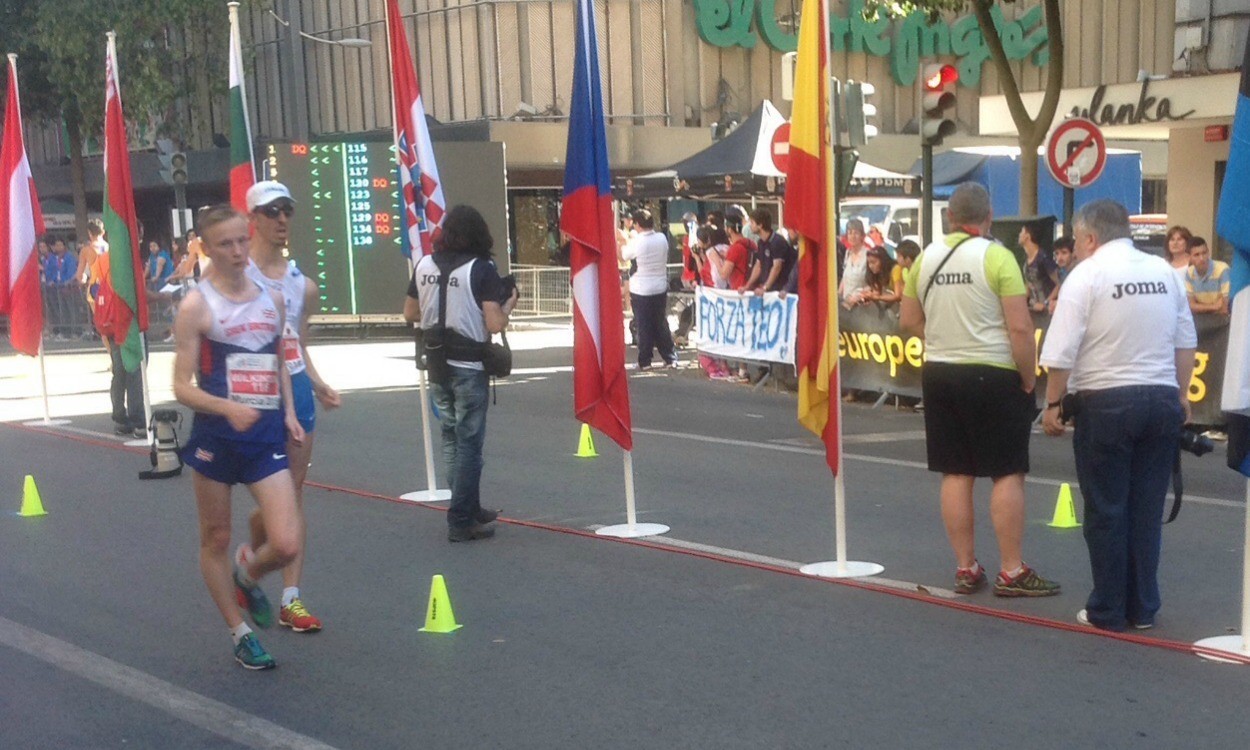 Callum Wilkinson smashed his personal best and was inside the qualifying time for the European Junior Championships in clocking 42:49 for 12th place at the European Race Walking Cup in Murcia, Spain, on Sunday, reports Ian Richards.

Behind him, Guy Thomas also clocked a big personal best in 43:40 for 17th as the team finished sixth, with 29th previously being the highest ever placing by a British team in any event in the European Cup.

A British trio all made a steady start with Wilkinson leading the way. Behind him Cameron Corbishley was pulling through the field with Thomas close behind. Soon after, Corbishley picked up three cards in the space of a lap and a half, leading to his disqualification. Wilkinson pushed on but he himself picked up two cards with two laps to go. He was able to control the last two laps and came through to finish in a personal best time.

“It was fantastic to get the qualifying time,” he said. “I was only ranked 25th going into the race so to finish 12th is fantastic. The conditions were perfect and it is a great course. I look forward to preparing for Sweden now.”

The race was won by Diego Garcia, much to the delight of the home crowd, in a fast 40:38. France’s Jean Blancheteau came through from seventh at the halfway mark to take the silver medal in 41:11, with Spain’s Pablo Oliva third in 41:19, helping Spain to take the team title from Russia and Germany.

The men’s 20km saw Tom Bosworth finish in the highest ever position by a British athlete in the event and clock 83:54. Despite the shade being cast by the tall buildings, it was still very hot and Bosworth made a conservative start, passing the 5km point in 20:56 in 24th. He picked up the pace at the 7km point and went through the halfway point in 41:35, holding 22nd place. However he went through a bad patch between 14 and 17km but he managed to rally in the last 3km, reeling off 4:07, 4:06 and 4:01 for the last three kilometres as he picked up six places.

Bosworth said: “I am pleased with how the race went, but my hip just locked up at the 14km point just as I was starting to really move through the field. However it is another Beijing standard.”

Miguel Angel Lopez sent the local crowd home happy by wrapping up a commanding victory in the final event of the day. Roared on by the large home crowd, the former world record-holder over 20km and the current 50km world record-holder clocked 79:52. Slovakia’s Matej Toth took the silver in 8:21 as France’s Yohann Diniz claimed the bronze in 80:37. Germany packed all of their three scorers between seven and 13 to take a surprising team victory ahead of Russia and the Ukraine.

Commonwealth champion Jo Atkinson found the going tough in the women’s 20km as the temperatures were in the high 20s by the end of the race. The second half was a battle of survival and Atkinson managed to hold it together to come home in 37th place in 1:44.28.

The race was won by Russian Elmira Alembekova in a fast 86:15, a championship record time, just beating Eleonora Giorgio in a sprint finish, the runner-up setting an Italian record of 86:17. Russian Svetlana Vasilyeva was third ahead of Czech Anezka Drahotova who set a national record of 86:53. Russia took the team title from and Portugal.

Britain’s Emma Achurch found racing in the hottest conditions of the day very tough in the junior women’s 10km and finished 24th in 53:35. Afterwards she said: “I just didn’t have anything in my legs today and I am very disappointed.” The race resulted in a one-two for Russia, led home by Klavdiya Afanasyeva in 45:55 ahead of Maryia Losinova with 46:11, with Spain’s Maria Perez taking the bronze in 47:08. Russia dominated the team competition, with Spain taking the silver and Italy the bronze.

The home crowd were left disappointed when Jesus Angel Garcia was disqualified at the 30km point in the men’s 50km event. Mikhail Ryzhov took the title in 3:43:32 from compatriot Ivan Noskov in 3:43:57. Italian Marco De Luca took the bronze medal in 3:46:21. Russia took the team title with 8 points ahead of Italy and Ukraine.