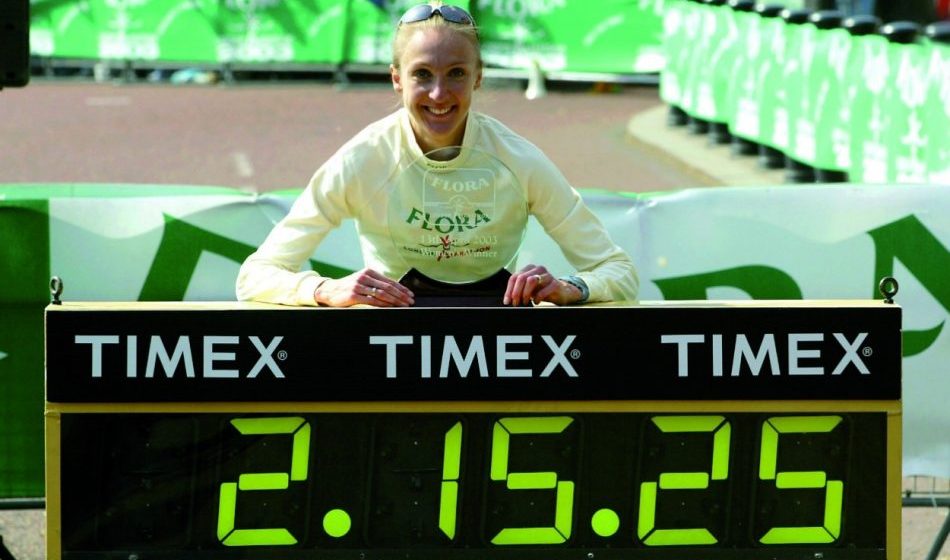 Continuing a series featuring AW content from years gone by, here is our report of Paula Radcliffe’s 2:15:25 marathon run in London in 2003 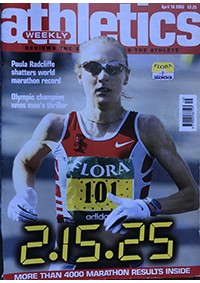 One French journalist began his report from the ‘Marathon de Londres’ with two short words. Clearly stunned, his fingers shaking with excitement, he summed up his feelings by writing in English: “My God!” Meanwhile, the British press pack could only describe what they had just seen with a series of swear words. As sportswriters, words are our business, yet here we were reduced to blasphemy and expletives. Truth is, we’ve run out of superlatives to describe Paula Radcliffe.

So instead, if we are to put this great run in perspective, we must analyse the statistics and search for comparisons. Winning literally by almost a mile, the 29-year-old’s new marathon mark of 2:15:25 shattered her previous record by 1:53. This means that since the Chicago Marathon in October last year she has taken a whopping three minutes and 22 seconds off the time set by the previous record-holder, Catherine Ndereba.

As predicted, she was the fastest Briton last Sunday, an emphatic two minutes and 32 seconds quicker than Chris Cariss of Bingley Harriers. During the whole of last year (2002) only two British men, Mark Steinle and Matt O’Dowd, ran quicker. Overall last Sunday, a mere 14 men ran better times, despite the men’s event being a tremendous race at the sharp end won by world and Olympic champion Gezahegne Abera.

Historically, Radcliffe’s performance was only seven seconds slower than the legendary Abebe Bikila ran to win the 1960 Olympic title in Rome. Famously running barefoot, Bikila is regarded as the first true superman of the marathon.

Racing Bikila’s ghost, Radcliffe would narrowly have lost out. Yet with a time of 2:15:25 she would have won every Olympic men’s marathon title before 1960, not to mention the 1968 event, although the latter, it must be added, was held at high altitude.

More statistics and comparisons: The brilliant Emil Zatopek clocked a mere 2:23:04 to win the 1952 Olympic title. Zatopek is regarded by many as the greatest distance runner in history and his performance at the Helsinki Games was an Olympic record at the time.

In addition to this, her 2:15:25 would have seen her place fourth in the 1972 Olympic men’s marathon in Munich, only a few strides behind Mamo Wolde, who had won the Olympic title in 1968.

Against fellow women, Radcliffe is one of only three athletes to break 2:20. Remember, too, this barrier was only broken for the first time in September 2001, when Naoko Takahashi of Japan followed her Sydney Olympic win by clocking 2:19:46 to take almost one minute off Tegla Loroupe’s world record in Berlin. One month later, Ndereba ran 2:18:47 in Chicago.

The personal bests of the other female greats from the modern era now look positively average compared to Radcliffe, although at the time they were each superb achievements. Ingrid Kristiansen of Norway clocked 2:21:06, a London course record until Radcliffe ran 2:18:56 on her debut last year. Another Norwegian, Grete Waitz, improved the marathon record by almost 10 minutes with 2:32:29 in 1978 to 2:25:28 in 1983 and ended her career with a best of 2:24:54. American Joan Benoit, the 1984 Olympic champion, ran 2:21:21. Scotland’s Liz McColgan clocked a best of 2:26:52.

Remember, too, women did not break three hours for the first time until 1971 and the event was not introduced to the Olympics until 1984. The longest event for women at the 1956 was a mere 200 metres.

Behind Radcliffe, Ndereba ran brilliantly with 2:19:54 and Deena Drossin smashed Benoit’s US record with 2:21:15. Yet they later admitted they were in a different race to Radcliffe.

The bookies are rarely wrong and William Hill had made Radcliffe a 1-4 odds on favourite with Ndereba 10-1 and Drossin 20-1. This was despite the much-publicised fall about a month before the big day, where Radcliffe had tangled with a bicycle during a training run.

The crash was so bad, in fact, that Radcliffe’s physical therapist, Gerard Hartmann, said he had serious doubts over whether Radcliffe would be able to make the start line. Cut knees and shoulders together with whiplash and a dislocated jaw were hardly insignificant injuries so soon before a major race. Later it emerged Radcliffe had used emu oil to help cure the cuts.

Remembering a similar crash in the build-up to last year’s race when she collided with her bicycle-riding training partner Marian Sutton, it was understandable therefore that one of the few things Radcliffe uttered during the race were words of warning to the cameraman on the lead motorbike.

“He kept coming too close to me and I had to tell him to back off,” she said. “The fumes were making me feel sick.”

The only other time Radcliffe spoke was when a rival innocently tried to pinch one of her energy drinks at a feeding station. Yet these were just a small part of a 26.2-mile adventure that began at 9am on Sunday and ended in glory on The Mall at just gone quarter past 11.

The official temperatures at 9am was 10C with a light easterly wind and 74% humidity. Things did warm up, of course, on a brilliantly sunny day. But on the whole conditions were nigh on ideal.

Rattling through early miles, Radcliffe hurtled through the third in a spectacular 4:57. From then on, it was clear she meant business.

Quickly breaking away, Susan Chepkemei was the bravest pursuer, with Drossin and Ndereba content to run more conservatively, pacing themselves for the latter stages. Chepkemei would later pay for her enthusiasm, fading to fourth in 2:32:11. By comparison, Radcliffe never wavered, coasting through 10 miles in 51:48, an unprecedented sub-2:16 pace, and at 11 miles had established a lead of 45 seconds.

Race number 101 must have cut an inspirational figure to anyone tuning into BBC1’s coverage. Her blonde hair sat atop a grimace that was partially obscured by her Nike sunglasses, which in turn rested upon a breathe-easy nose plaster. Her red vest and pants were reminiscent of the Puma England kit she wore to win the Commonwealth 5000m title last summer. While her get-up also unsurprisingly included a pair of white gloves (although no blue beanie hat, as she had worn in Chicago) and her trademark flesh-coloured, knee-high socks. Plus of course the familiar red ribbon, an anti-drugs statement.

In addition to this she was chaperoned by two Kenyan male athletes, Chris Kandie and Simon Loywapet. The decision by London had caused great furore in the weeks leading up to the race and Radcliffe had been unfairly branded a ‘prima donna’, despite her never asking for such help. Yet their presence last Sunday was not a big issue.

For one, Radcliffe never truly benefited from running in their slipstream, almost always staying a couple of metres adrift and to the side. Secondly, there was the overwhelming feeling that Radcliffe, a natural frontrunner, could have achieved her brilliant time on her own.

“There were less people around me than there were in Chicago last October,” she said. “And for the first half of the race they were a fair way ahead of me. I just don’t like running behind people, even on the track.”

Radcliffe went through halfway in 68:02 and then, incredibly, began speeding up, successfully running the second half faster. Among those struggling to keep up were Derartu Tulu, the Olympic and world 10,000m champion, who faded to 10th in 2:26:32. Zola Budd-Pieterse, now 36 and running her first marathon to try to qualify for South Africa’s world championships team, dropped out after 20 miles, complaining that her blood sugar levels were low.

By 16 miles Radcliffe had a lead of 2:20 and she went on to pass 30km in 1:36:36 and 20 miles in 1:38:26 – both of which were unofficial world bests. Following her usual pre-marathon breakfast of porridge, honey, bananas and an energy bar, she was showing no sign of hitting ‘the wall’.

“The experience I gained in my first two marathons before today,” she explained, “told me it is better to run a quicker second half of the race.”

But she added: “If I’d been on my own I might have run the first half even quicker but this was always more about a race than a time and I had lots of good athletes behind me.”

Inside the final 10km, Radcliffe really started to put her foot on the proverbial gas. Metronomically knocking out a succession of miles in just outside five minutes, she later admitted she only managed to handle the pain by counting to 100 three times for each mile. It must have been a relief, too, when she cast her gloves off just before the two-hour marker, knowing the finish was almost in sight.

“From 30km onwards is the easy bit,” she laughed. “It’s the half-hour before that that’s the really hard bit.”

She maintained her ruthless momentum to the finish. True to one of her mottos: ‘you’ve never won a race until you cross the line’, she continued piling on the effort amid huge cheers from a delighted British crowd.

Drossin described Radcliffe’s run as “an inspirational performance”, adding: “I can’t wait to see the clips on television. Paula shows what can be achieved if you are prepared to make some tough sacrifices.”

After crossing the line, Radcliffe said: “This year was amazing. Everybody says the Docklands is the quiet bit but I thought it was the loudest. I had a bad spell in the last five miles, basically trying to run when I had stomach pains. Maybe this is why my mile splits were a bit erratic. But I get this in training and I was never in danger of not getting around. I did feel pretty sick at the end, though.”

She also played down her ‘quantum leap’. “I think Deena perhaps has made a bigger leap and has more to come,” Radcliffe said. “The whole event is moving on.”

Could she run faster? “Not today!” she joked, before explaining her next marathon would be Athens at the earliest.

Later, the consummate professional explained how she planned to have a massage, an ice bath and a nice, three-week rest from running. The following day, in fact, was her wedding anniversary.

Walking off chomping a cheddar salad sandwich, she appeared as down to earth as she was when her name first started to appear in AW in the 1980s. This was despite just winning an estimated half a million pounds to add to her growing fortune.

Her efforts brought $255,000 in prize money including a world record bonus of $125,000 while some claim her appearance fee was the biggest in the race’s history. Add to this bonuses from her kit company, too, and it is the most any female athlete has earned in a day – not a bad achievement for a runner who used to be known as one of Britain’s plucky losers.

Ironically, the place where her running career started, her home town of Bedford, is just 45 minutes up the A1 from London. Yet her journey from teenage hopeful to sorting superstar has been rather longer, to say the least.