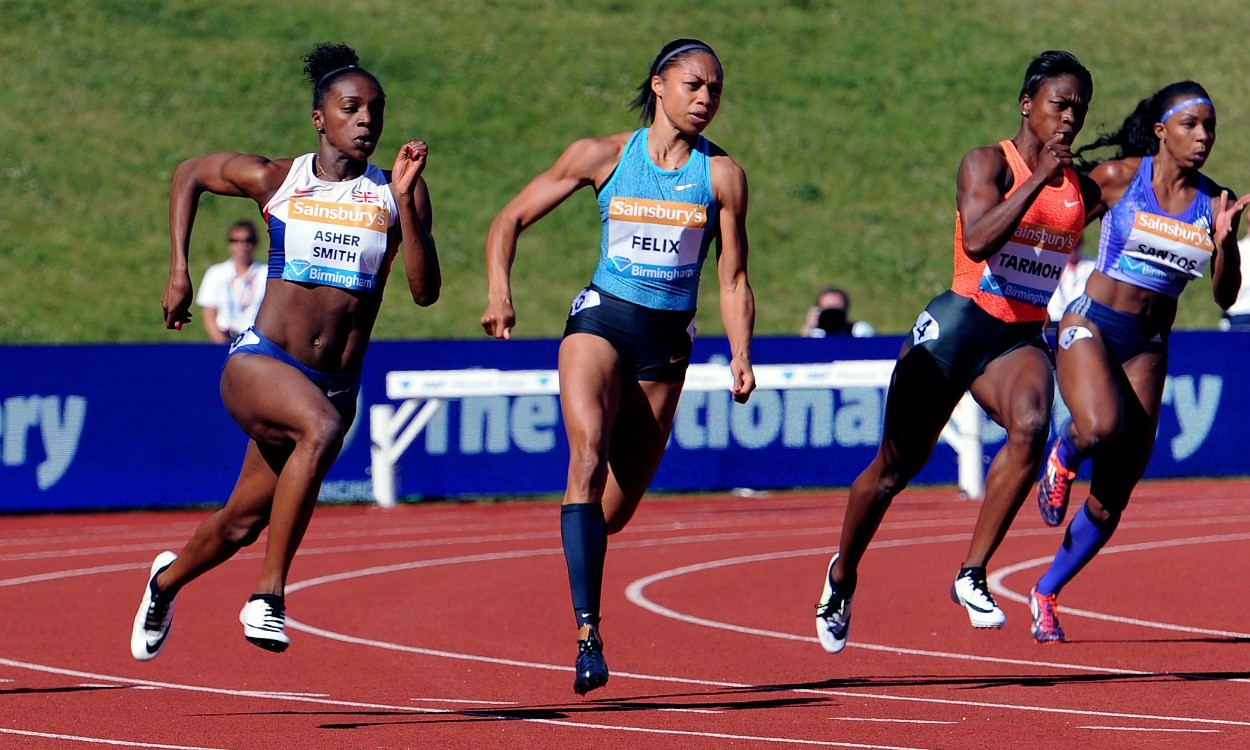 As the exodus of athletes unfolded in the run-up to the Sainsbury’s Birmingham Grand Prix – from David Rudisha and Jessica Ennis-Hill to Christine Ohuruogu and Mo Farah – the message from the remaining, competing athletes was simple: “We’re still here. Watch us rise to the occasion.”

They kept their promise, too, as memories of Farah and other absentees faded throughout an afternoon that witnessed historic sprinting from the host nation’s Dina Asher-Smith and Adam Gemili, terrific long jumping from Greg Rutherford and an amazing men’s javelin where Julius Yego’s 91.39m throw – the best global mark since 2006 – was initially judged as landing outside the sector but later ruled legal.

Rutherford was the only British winner of the day, but the home crowd also had plenty to cheer in the sprints as Asher-Smith and Gemili again showed their great talent. In the women’s 200m, Asher-Smith led off the turn and pushed Allyson Felix and Jeneba Tarmoh all the way – the Americans eventually finishing one-two in 22.29, with Tarmoh getting the verdict, and Asher-Smith, who is still only 19, one hundredth of a second behind.

The 22.30 from the world junior champion puts her No.2 on the UK all-time rankings behind Kathy Cook’s national record of 22.10 and is the fastest time by a Briton since Cook’s vintage year of 1984. “I wasn’t expecting to run a time like that but I’ll take 22.30,” she said. “I was thinking ‘what are they doing there – they’re meant to be right in front of me’ and that I just had to try to hold my form.”

Gemili was also beaten in the men’s 100m, but went down with a fight, literally, as he threw himself at the finish line to clock 9.97 behind winner Marvin Bracy’s 9.93. Gemili’s tumble caused him to injure himself and he grasped his thigh in pain, but he recovered enough to wave in appreciation to the crowd’s applause and his trademark smile was as wide as usual as he was stretchered off the track.

The applause was justified as he became only the sixth British sprinter to break 10 seconds for 100m and the first to crack both the 10 and 20-second barriers for 100m and 200m. Earlier, Gemili had come close with 10.00 dead in the heats as Bracy ran 9.97, but let’s hope Gemili’s performances did not come at a price.

Rutherford also delighted the Birmingham crowd in a superb long jump where he produced his best-ever mark on British soil and the second-best of his life with 8.35m to beat Michael Hartfield – the American jumping 8.23m as Briton Dan Bramble jumped 8.17m in third – a World Championships qualifier.

Rutherford said: “When you’re only three weeks post injury, you’re never sure how your body is. That’s the longest I’ve ever jumped in Britain and the second longest of my career so by that alone it’s not been a bad day.”

Javelin throwers also rose to the occasion in style with an amazing competition. First Keshorn Walcott set a Trinidad & Tobago record of 86.43m. Then Yego hurled the spear out into the blue skies of Birmingham to 86.53m to take the lead. Vesely of the Czech Republic, who had beaten them both in Rome a few days earlier, then threw 88.18m in the last round and looked set to win. But Yego had one, final mammoth throw up his sleeve and launched the javelin out beyond the 90m mark but also, it initially appeared, outside the sector.

For some time it seemed it would be disallowed, but the Kenyan marched out to inspect where it landed and eventually it was judged to be a legal mark of 91.39m – an African and Diamond League record and world-leading mark for 2015.

The men’s 1500m was originally planned to bring the programme to a close but when Farah dropped out it was brought forward by 90 minutes so that the women’s 1500m could instead provide the climax to the meet. There was still plenty of British interest with Charlie Grice and Ross Murray finishing a fighting fifth and sixth in 3:39-40 but the race saw James Magut, the Commonwealth champion from Kenya, win in 3:37.61. Bernard Lagat, meanwhile, ran 3:41.87 to dip inside Anthony Whiteman’s world M40 best.

The women’s 1500m, meanwhile, saw Sifan Hassan take the win for the Netherlands in 4:00.30 as she stretched away from Abeba Aregawi of Sweden on the last lap and Laura Weightman of Britain won a scrap for third in 4:06.42.

Sally Pearson was one of more than half a dozen Olympic champions missing but the Australian had suffered a broken wrist in Rome a few days earlier. In her absence in Birmingham, Dawn Harper-Nelson won the women’s 100m hurdles with 12.58 from fellow American Brianna Rollins as Britain’s Tiffany Porter was third in 12.65 and Porter’s team-mate, Serita Solomon, ran 12.87 in fifth to smash her PB.

Eunice Sum enjoyed a comfortable win in the women’s 800m. Kenya’s Commonwealth champion dipped under two minutes with 1:59.85 while Laura Muir ran a 2:00.42 PB for second as fellow Brits Alison Leonard, Shelayna Oskan-Clarke and Jenny Meadows all ran 2:01 and bits in fourth, fifth and seventh respectively.

The men’s 800m saw another Glasgow 2014 winner, Nijel Amos, take victory as the Botswanan ran 1:46.77 to hold off Adam Kszczot of Poland as promising British youngsters Kyle Langford and Theo Blundell faded to seventh and eighth, while Guy Learmonth fell at the bell.

The Commonwealth theme continued in the women’s 400m hurdles as Glasgow 2014 gold medallist Kaliese Spencer of Jamaica won in 54.45 with Eilidh Child, one of the Scottish stars of the Games, fourth in 55.14.

Earlier, Sandra Perkovic got the meeting off to a great start with a meeting record of 69.23m in the first round of the discus. It proved good enough for the Croatian to win by more than four metres from Dani Samuels of Australia.

The first track race of the day did not go to script for the home crowd as Wayde Van Niekerk of South Africa stormed to victory in 31.63 – the eighth fastest time in history and an African record – as Delano Williams led the GB challenge in third in 32.14 with Matthew Hudson-Smith, Nigel Levine and Martyn Rooney fifth, sixth and seventh as Doug Walker’s UK record of 31.56 survived.

In the triple jump, Christian Taylor put together a series of 17m-plus efforts – his best of 17.40m securing victory. The American has been living and training in Loughborough in recent years but the Olympic champion is now Dutch-based and looks the man most likely to challenge Pedro Pablo Pichardo for the world title later this season.

Finally, the women’s pole vault provided a reminder that the Rio Olympics is just over a year away as Brazilian Fabiana Murer won with 4.72m.

Before then, though, next stop on the 2015 Diamond League circuit is Oslo on Thursday.

» See the June 11 issue of Athletics Weekly for an in-depth report, more photos and full results from Birmingham