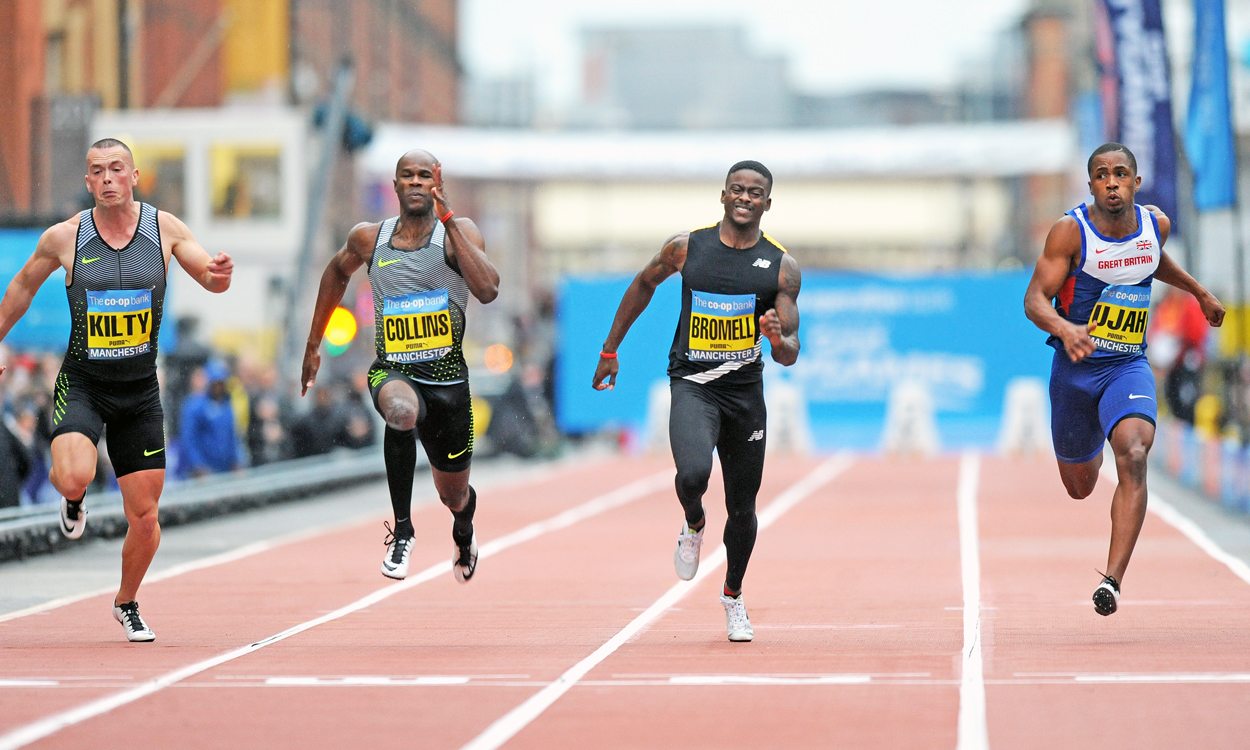 As 40-year-old reaches career home straight, he says missing his missus is much tougher than age-related aches and injuries

Moments after winning the 100m at the Co-operative Bank Great CityGames in Manchester, the evergreen grandfather of the global sprint scene, Kim Collins, paused to ponder a question. “One month after his 40th birthday,” I asked, “what part of his body – or mind – is showing the effects of age the most? A sore hamstring perhaps? Creaky knee joints? A tender Achilles? Or is motivation an issue?”

“None of those,” he replied. “The hardest bit is missing family,” he explained. “That is becoming more of a burden. It’s not a good feeling being away by yourself. Most of the time I am away on my own without my coach/wife. It is by far the hardest part.”

To combat the problem, Collins tries to spend no more than six weeks away from home at any one time. Although this has been helped by a dwindling competition programme during his 20-plus years as an elite athlete.

“I used to be away for four months in summer and two months in the winter,” he explained. “And being away from home for six months per year is hard. But it’s less these days. The schedule is not what it was a few years ago as some meetings have been cancelled due to financial reasons.”

Along with miler Bernard Lagat and distance running legend Haile Gebrselassie, Collins has amazed fans in recent years with his timeless performances. His 100m PB of 9.96 was set in London in 2014 aged 38 and his PB for 60m of 6.47 took place in Lodz, Poland, less than a couple of months before his 39th birthday last year. But his 2016 Great CityGames win in Manchester on a chilly, damp Friday night in Manchester is right up as one of his best, age-defying performances as he beat, among others, world indoor champion and world outdoor 100m bronze medallist Trayvon Bromell, plus Britons CJ Ujah and Richard Kilty.

Bromell is half Collins’ age and was not even born when the St Kitts & Nevis sprinter first began racing internationally. Despite this, Collins was not surprised to win.

“It was no surprise,” he said. “Your age does not matter when you are on the start line. I have been training for this and I know what my body is capable of.”

Forever popular with fans due to his smiling personality, Collins is also admired for being the opposite of the archetypal muscle-bound sprinter. Not a fan of the weights room, he has always been relaxed about training – never afraid to take a day off if he feels like it – and is a throwback to the days when sprinters measured their progress with their speed down the training track and not their bench press or leg squatting ability.

He is not simply a freak who has reached his peak in the twilight of his career either. The 40-year-old made his first Olympics in 1996, not long after his 21st birthday, and could have competed in his fifth Games in London four years ago if he had not been absurdly expelled from the athletes’ village by his own team management for meeting his wife and children in a London hotel.

In 2002 he won the Commonwealth 100m title in Manchester. “I wasn’t favourite on that occasion either,” he reminds me, on a night where he defeated, among others, the English trio of Dwain Chambers, Jason Gardener and Mark Lewis-Francis. “I enjoy being the underdog,” he adds.

Like Collins, I am also showing my age when I tell him I was there that night reporting for AW and moonlighting for the Sunday Mirror – a newspaper that made the dubious decision to send its chief sportswriter to watch Rio Ferdinand’s first game for Manchester United (away to Bournemouth in a pre-season friendly) rather than cover the Commonwealth Games blue ribbon sprint final.

So what is Collins’ enduring memory of that victory, from a race that was held about three miles down the road from the CityGames venue of Deansgate an athletics lifetime of 14 years ago?

“Outside of the race what I really remember is a streaker!” he recalls. “I remember doing a flash interview and I saw the police walk by with this big dude. I’d heard about streakers and seen a lot of it on TV but to see somebody do it was something else!”

Collins has more victories – and memories – than most athletes. But some day it will end and it could come sooner than his fans would like.

“I’m getting old,” he says, suggesting that he might quit once he’s broken 10 seconds again for 100 metres. “I’m not old, but I’m getting old. There’s only so much the body can take when you’ve been making teams since 1993.”