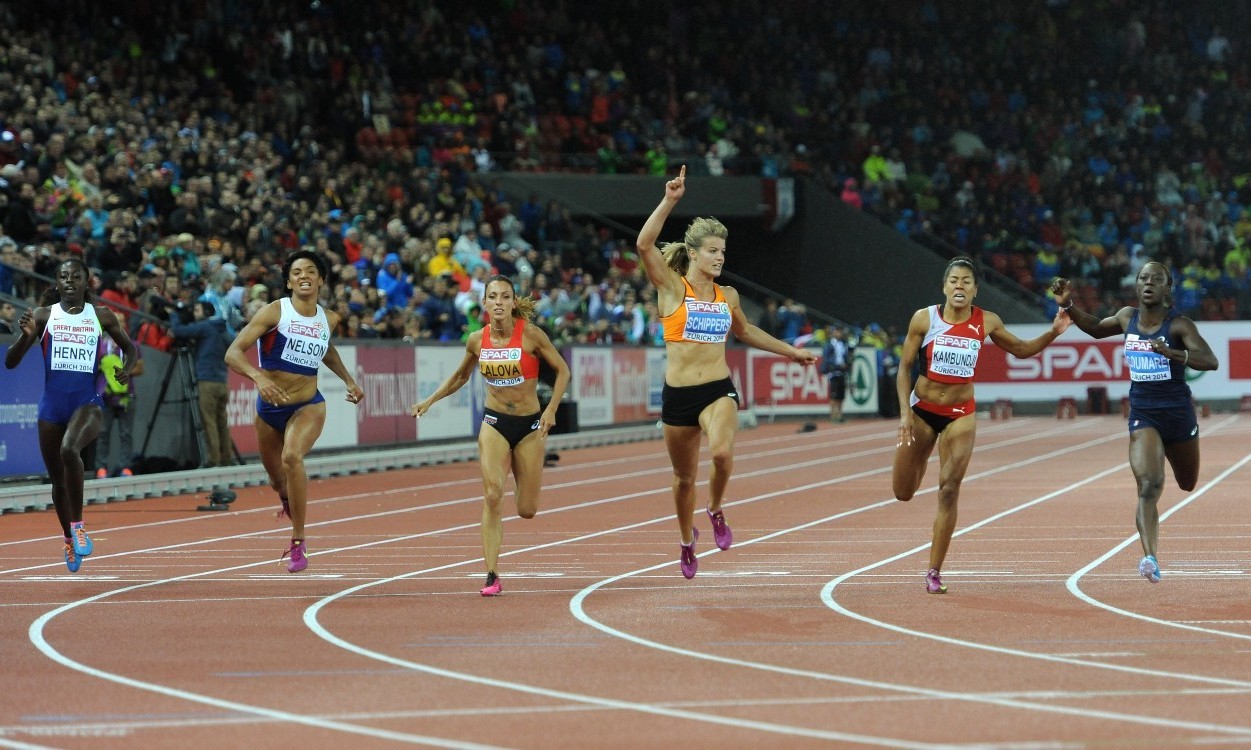 Dafne Schippers, James Dasaolu and Barbora Spotakova among winners as Europe team is victorious in Morocco

Europe was victorious at the two-day IAAF Continental Cup in Marrakech as the team’s 447.5 points ensured a comfortable win ahead of 2010 winners Americas.

Dafne Schippers, James Dasaolu and Barbora Spotakov were among the athletes to claim a full eight points for their continent and while the aim was to get as many points as possible for the team tally, the competition also provided an opportunity for a number of athletes to benefit individually and post promising end-of-season marks.

Heptathlete Schippers, who won both the 100m and 200m titles at the European Championships in Zurich, clocked 22.28 to comfortably win the half-lap event on Sunday after her third place finish in the 100m the day before. Behind her, Joanna Atkins ran 22.53 for the 200m runner-up spot as Schippers’ Europe team-mate Myriam Soumaré ran 22.58 for third.

Over in the women’s 100m hurdles and another of the winners in Zurich – Tiffany Porter – ensured her season ended on a high, clocking a UK record of 12.51 when finishing as a runner-up to world leader and Americas team-member Dawn Harper-Nelson with a 12.47 Continental Cup record as well as African all-comers’ record. Porter’s time betters a British record of 12.54 set by Jessica Ennis-Hill in 2012. You can read more on Porter’s UK record here.

Victories for Dasaolu in the 100m, Bohdan Bondarenko in the high jump and Spotakova in the javelin had helped Europe into the lead with 222.5 points to the Americas team’s 191, Africa’s 164 and Asia-Pacific’s 137.5 following the first day’s action.

After enjoying a strong start, Dasaolu was caught by Mike Rodgers of Americas and Asia-Pacific’s Femi Ogunode, though he had just enough to hold on and edge ahead over the line to clock 10.03 for the full eight points to his rivals’ joint time of 10.04 – Rodgers securing second and Ogunode third. Bondarenko was again up against Mutaz Essa Barshim and Ivan Ukhov and the Ukrainian was back to his winning ways as he was the only one to clear 2.37m. Bondarenko managed the winning height on his first attempt as Barshim failed all three goes and Ukhov decided to call it a day, the Russian finishing ahead of Qatar’s Barshim on countback helping to secure maximum points for Europe.

Spotakova broke the African all-comers’ record with her throw of 65.52m in the third round, but Olympic and world discus champion Sandra Perkovic did not share the same level of success as she was beaten by both Americas’ Gia Lewis-Smallwood and Dani Samuels for Asia-Pacific and had to be satisfied with a best of 62.08m for third behind Lewis-Smallwood’s winning throw of 64.55m. Samuels threw 64.39m.

Other winners on day one included Kaliese Spencer in the 400m hurdles, as she clocked 53.81 to gain eight points for Americas ahead of European champion Eilidh Child with 54.42, and world 800m champion Eunice Sum who ran 1:58.21 for an Africa victory as Britain’s 2014 European silver medallist Lynsey Sharp finished fifth in 2:00.80.

An Americas team ran an African all-comers’ record in the men’s 4x100m relay as Kim Collins, Rodgers, Nesta Carter and Richard Thompson combined to clock 37.97 ahead of a Europe team comprising British sprinters James Ellington, Harry Aikines-Aryeetey and Richard Kilty as well as France’s Christophe Lemaitre for 38.62. Again an Americas team won the women’s relay as Tianna Bartoletta, Ahye, Samantha Henry-Robinson and Campbell-Brown clocked 42.44 ahead of an all-British team featuring the quartet that combined to break the national 4x100m record in Zurich at the end of August – Asha Philip, Ashleigh Nelson, Anyika Onuora and Desiree Henry – with 42.98.

Although Porter provided the highlight on day two from a British perspective there were other top performances across the board from the likes of France’s Benjamin Compaoré who leapt a PB and African all-comers’ record of 17.48m to win the triple jump ahead of Godfrey Mokoena with a South African record of 17.35m. The top two went sub-20 seconds in the men’s 200m as Alonso Edward claimed victory from Americas team-mate Rasheed Dwyer, both athletes clocking 19.98. Caleb Ndiku secured another win in a year which has seen him claim victories at the World Indoor Championships, Commonwealth Games and African Championships as well as take the overall Diamond League title. He ran 7:52.64 to take the 3000m ahead of Hayle Ibrahimov representing Europe as Americas’ Bernard Lagat finished third.

Gerd Kanter won Europe’s sixth consecutive men’s discus title with a best of 64.46m in the final round, while Asia-Pacific’s Valerie Adams was a DNS in the women’s shot competition. “I had a (pain-killer) injection (for a groin injury) and it hit my nerve so now I cannot feel my hands. I’m very upset,” the IAAF later quoted Adams as saying. Christina Schwanitz went on to claim victory with a best of 20.02m.

Renaud Lavillenie won the pole vault, clearing 5.80m on his third attempt, while Sifan Hassan was another winner for Europe as she ran a 58-second last lap to clock 4:05.99 for 1500m victory from Americas’ Shannon Rowbury with 4:07.21. Africa team-mates Dawit Seyaum and Hellen Obiri ran 4:07.61 and 4:08.15 for third and fourth respectively.

Emma Coburn was victorious for the Americas team in the 3000m steeplechase as Hiwot Ayalew fell after the final barrier and later had to be stretchered off the track.  There was an Africa one-two in a women’s 5000m which saw the first 400m covered in only 1:33.71. The pace having picked up,  Almaz Ayana and Joyce Chepkirui separated themselves from the rest of the field and took the top spots in 15:33.32 and 15:58.31 respectively as Britain’s European 10,000m champion and Commonwealth 5000m silver medallist Jo Pavey – European team co-captain in Marrakech – came through to clock 15:58.67 for third.

An Americas women’s 4x400m team of Christine Day, Francena McCorory, Stephenie Ann McPherson and Novlene Williams-Mills clocked a world-leading 3:20.93 to finish more than three seconds clear ahead of Europe, while the Africa men’s 4x400m team ensured the competition ended with a win for the hosts – Boniface Mucheru Tumuti, Isaac Makwala, Saviour Kombe and Wayde van Niekerk combining to clock 3:00.02 to beat a European team anchored by Martyn Rooney, the Briton crossing the line in 3:00.10.

» Full results from the IAAF Continental Cup in Marrakech can be found here, while the September 18 edition of Athletics Weekly magazine will include further reports, pictures and results