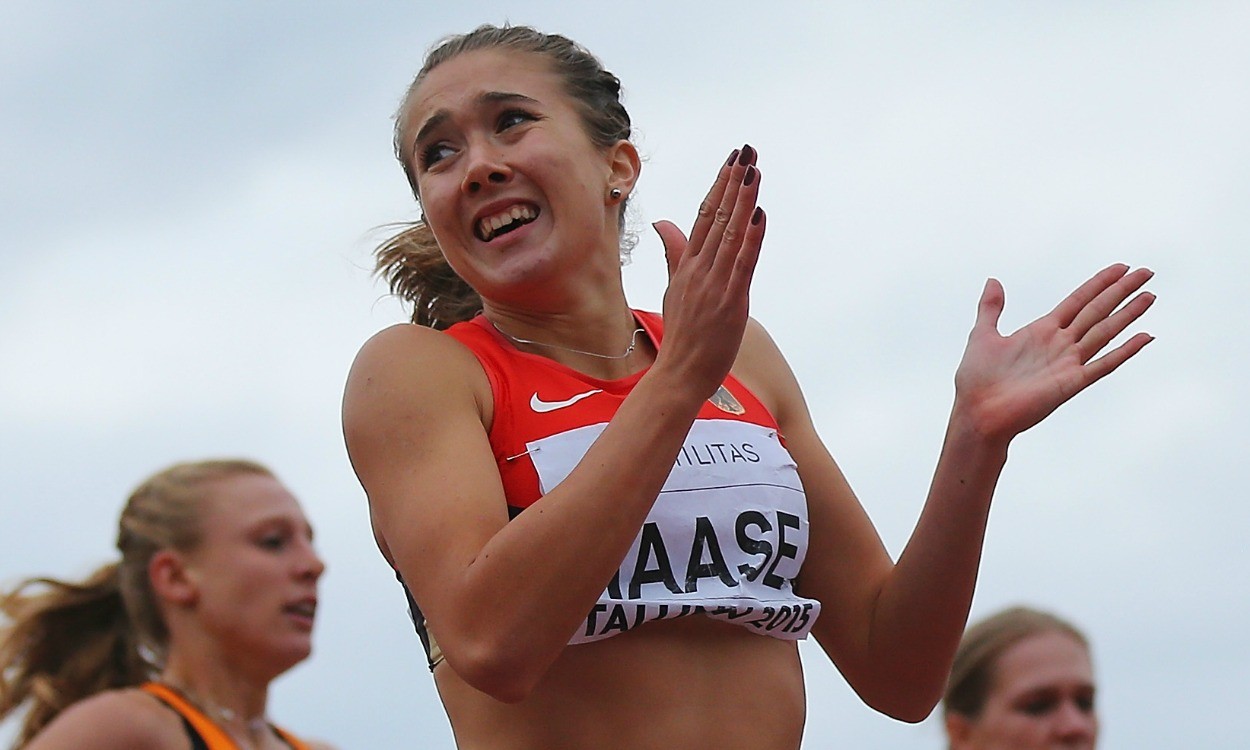 Rebekka Haase became the first athlete to win triple gold at the European Under-23 Championships on Sunday, the German sprinter adding a 4x100m relay win to the 100m and 200m titles already claimed in Tallinn.

Clocking 43.47, the German quartet – which also included Amelie-Sophie Lederer, Alexandra Burghardt and Anna-Lena Freese, with Haase running the second leg – beat Italy with 44.06 and Switzerland with a 44.24 national under-23 record.

Haase was fresh from having won the 200m title on Saturday in 23.16 from Freese after also having led a German one-two in the 100m on Friday, taking the title ahead of Burghardt in 11.47.

The men’s sprint relay title was won by France in 39.36, just 0.02 ahead of Czech Republic, while Russia and the three other teams to place set national under-23 records, the bronze medal-winners clocking 39.45.

“It was really hard to see how good a chance I’d given the girls as the stagger was so big and I’ve never done leg one before,” said Bundy-Davies, who finished fourth in the individual 400m on Saturday. “I’m so happy because as a team we glued together so well.”

Following tradition, the men’s 4x400m relay was the final event of the championships and was won by France, anchored by individual 400m gold medallist Thomas Jordier, in 3:04.92 from Poland and Germany.

Team captain Jazmin Sawyers added to Great Britain’s medal tally after her 6.71m long jump PB in the fifth round secured her the silver behind Germany’s Malaika Mihambo with 6.73m. It was a repeat of the finishing positions for the pair at the European Junior Championships in Rieti two years ago.

“I’m so chuffed!” said Sawyers. “I feel like that’s the kind of jump I’ve been waiting to show I can do for ages and it’s been so frustrating that it hasn’t come out.

“When it came up on the board I could barely believe it – I’m so so happy! It’s my first PB in almost three years – I’ve got no more words.”

Liv Westphal was dominant in the women’s 5000m, running a French under-23 record of 15:30.61 for victory ahead of Belguim’s Louise Carton who also ran a national record of 15:32.75. GB’s Calli Thackery and Bethan Knights were fifth and sixth with respective times of 15:47.71 and 15:51.49 as Czech Republic’s multi-talented Anezka Drahotova returned to the track after her 20km race walk silver on Friday to finish 12th.

In the women’s 1500m Amela Terzic successfully defended her title and improved her own championship record and Serbian record to 4:04.77 as GB duo Rhianwedd Price and Melissa Courtney ran respective times of 4:10.25 and 4:17.49 for fourth and 10th.

Poland’s Artur Kuciapski claimed the 800m title in 1:48.11, while Bulgaria’s Mitko Tsenov ran 8:37.79 for 3000m steeplechase gold. There had earlier been another win for Poland as Patryk Dobek claimed the 400m hurdles title, going sub-49 seconds for the first time with 48.84. The women’s event was won by Sweden’s Elise Malmberg as GB’s Shona Richards ran a 56.05 PB to finish just 0.01 outside the medals. That time by world junior silver medallist Richards is a British age-19 best which betters a mark set by Perri Shakes-Drayton.

Germany claimed a clean sweep of the medals in the women’s discus led by shot put silver medallist Shanice Craft with 63.83m. Russia’s Dmitriy Chizhikov was dominant in the triple jump and claimed gold with 17.05m, while Croatia’s Filip Mihaljevic won the shot with 19.35m and Poland’s Kacper Oleszczuk the javelin with his 82.29m PB.

Finishing off two days of action with a 4:36.19 1500m, Pieter Braun of Netherlands claimed a total of 8195 points for decathlon victory. Janek Oiglane bagged a bronze for the hosts with his 7945-point PB tally.

» Full results can be found at www.european-athletics.org, while the next edition of AW magazine, out Thursday July 16, will include reports, pictures and results