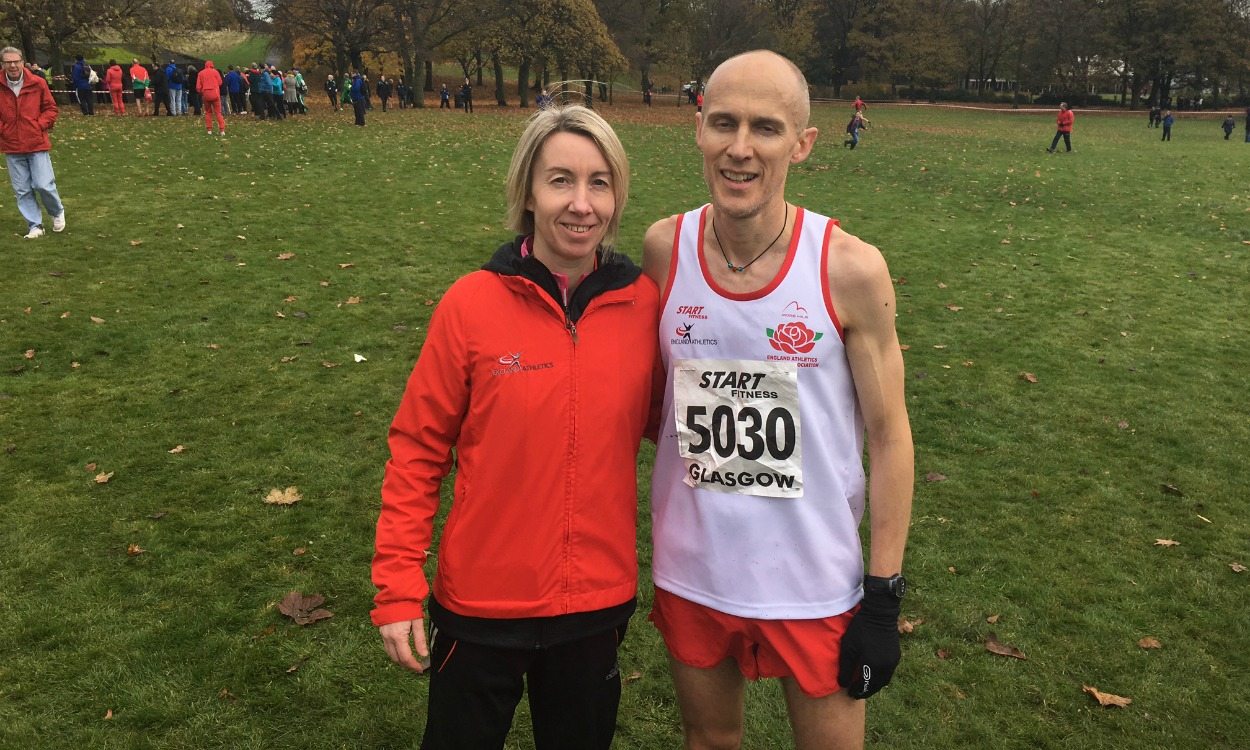 On the same weekend that England’s footballers were dominating Scotland in Wembley, their master cross-country runners were also faring well, this time in Scotland.

On a testing course in Glasgow, England came out on top at the British and Irish Masters Cross Country International at Tollcross Park and it was Ireland who pushed them close as the Scots found it hard to make home advantage count.

The women’s and M65 race was first off and England’s Claire Martin (pictured) continued her remarkable success.

She not only won her seventh age group title in claiming the W40s but also again won the race outright.

Last year’s champion, Ann-Marie McGlynn of Ireland, wasn’t present to defend her overall title and this year the W35 gold went to Emma Macready, who was making her Masters International debut.

England also won the W45 and W5o individual races. Clare Elms won her third successive W50 title and, in finishing in the top seven overall, also beat all the W45s who were headed by her team-mate Mandy Vernon.

Scotland found success harder to come by but they predictably won the W55s through Fiona Matheson. A past winner at W50s before Elms hit her age group, she has already been setting records and she would have easily been second in the W50s.

Another favourite who looked unbeatable in her age group was Carmel Parnell. The Irish athlete won her eighth successive title and her tenth overall as she dominated the W60 race.

Another serial winner is Angela Copson and she won her ninth successive title and her fifth in her last year in the W65s. It was her toughest yet though as Scotland’s Ann White pushed her all the way.

The M65 race went Ireland’s way as a barefoot JJ Murphy made light of the slippery conditions while the M70 race was won by Northern Ireland’s fell specialist Jim Patterson.

After Martin had won the first race for Telford, the second one also went to the Shropshire club.

Paul Ward (pictured), who is new to the M50s, broke clear on the final lap to defeat his English team-mate, world masters 5000m champion and 2014 winner Ben Reynolds, and four-time M45 winner Austin Davies of Wales.

The M55 race saw former winner Rob Atkinson build up an early lead but it was Julian Critchlow who finished the strongest and the Watford Harrier won his third International title.

England also won the M60s as John Lowden made a great debut in the event to come through strongly.

Lowden is a Brighton & Hove athlete and his club-mate Howard Bristow led for much of the M35 plus race. He eventually faded behind a strong Irish M35 contingent who easily won the team race in that age group but he held on to easily win the M40s.

The M35 individual crown went to Ireland’s Michael Harty, who defended his age-group title but was pleased to go one better overall than 2015 as he was defeated by M40 champion Chris Greenwood, who was absent this year.

The M45 race saw a rare win for Wales as Don Naylor powered through the second half of the race. Naylor, who was sixth in the 2002 Commonwealth Games steeplechase and has a PB of 8:37.35, surprised a few by his success, not least because he was in the programme as an M40 and the team manager only thereafter realised he was eligible for the older age group, having turned 45 in September.