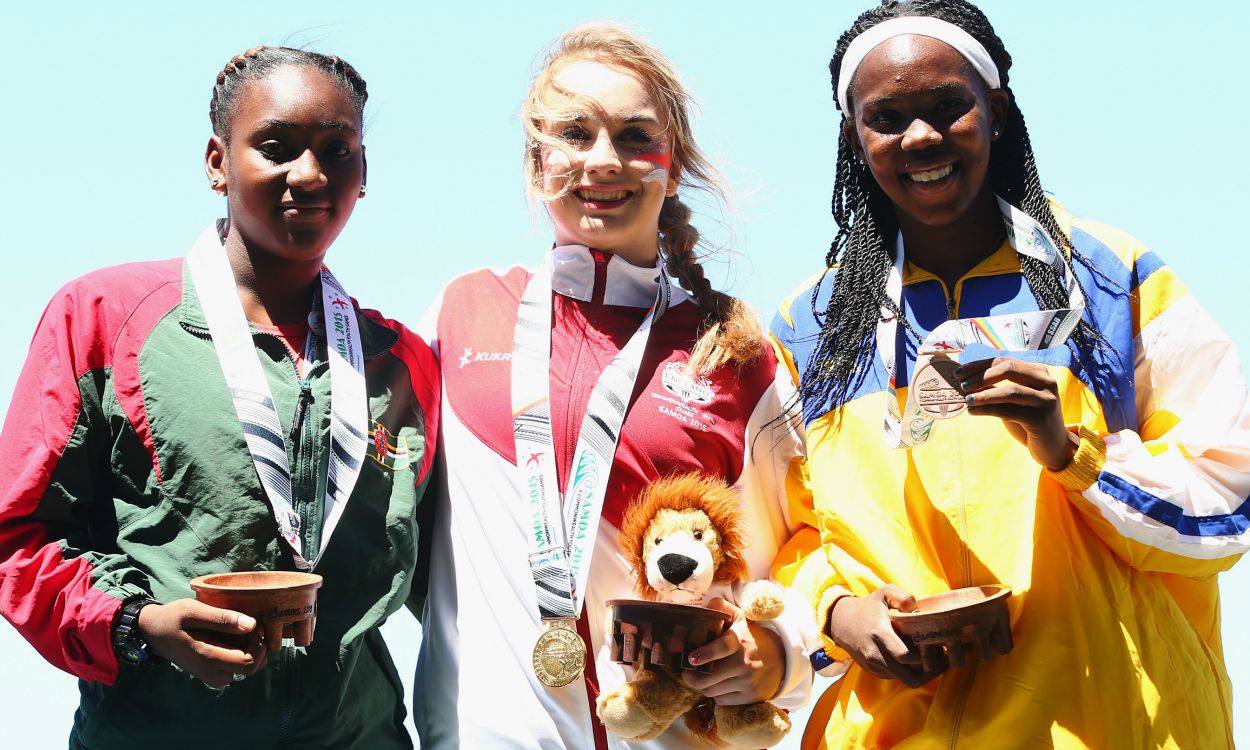 England’s Emma Hamplett won England’s first gold of the Games with victory in the javelin thanks to her throw of 49.57m.

“It feels amazing to be Scotland’s first medallist of the Games,” said Evans. “Coming away with a silver medal, only beaten by the world champion, is the best thing that could have happened.

“I knew there were two guys who were ranked two metres and four metres above me so I thought it would be close depending on what happened on the day. To come out and get second, it couldn’t have gone any better.”

England’s Rechmial Miller ran a 10.39 PB and Scotland’s Cameron Tindle a 10.42 PB to claim 100m silver and bronze respectively behind South Africa’s Tlotliso Leotlela who equalled the second-fastest ever time by a youth athlete with his 10.20 for gold.

Also adding to Scotland’s medal haul in Samoa was Alisha Rees who clocked 11.72 in the women’s event for bronze.

Katie Lambert set a UK under-17 hammer best, throwing 63.08m to add 57 centimetres to a mark set by Katie Head at the England Under-17 Championships recently.

Jona Efoloko was also among the winners as he clocked 21.71 to take the 200m and later helped his North West team to second place in the sprint relay.

James Whiteaker  produced a season’s best of 73.45m in the javelin to better his winning throw from the England Champs in Bedford the previous week.

Phoebe Tan cleared 1.72m on her third attempt in the high jump to take the win ahead of Isabelle Cain-Daley.

Scotland’s Kate Gallagher enjoyed a clear victory in the 3000m, 10:02.97, while over in the sprints Charmont Webster-Tape and Mair Edwards won the 100m and 200m events respectively.

See the September 10 edition of Athletics Weekly magazine for a Stephen Green report and pictures by Harry Shakeshaft.

Lynsey Sharp broke the Scottish 800m record and ran the third quickest ever time by a British woman.

Windsor Slough Eton and Hounslow won easily by over 70 points.

In the jumps, Sam Challis won the under-17 long jump and Dami Famakin the under-20 triple jump.

The day’s best performance award went to Sale’s European junior champion Adam Hague who won the pole vault with a clearance of 5.20m.

Further details and David Griffiths’ photographs will appear in this week’s magazine.

Edinburgh narrowly won the under-15 event from Blackheath and Bromley. Sale Harriers were third.

Another Blackheath winner was England under-15 hammer champion James Lancaster, who easily won his speciality with a throw of 54.62m Rowan Fuss won the under-13 1500m by 19 seconds.

Further details and David Griffiths’ photographs will appear in this week’s issue.

Kevin Fahey’s report will appear in this week’s AW magazine.

Chris Thompson continued his return towards top form after injury by winning the Kew Gardens 10km in 28:58. Steph Twell was top woman with 33:40.

Britain’s Jessica Coulson ran a PB of 32:44 in sixth, dipping under 33 minutes for the distance on the road for the first time.