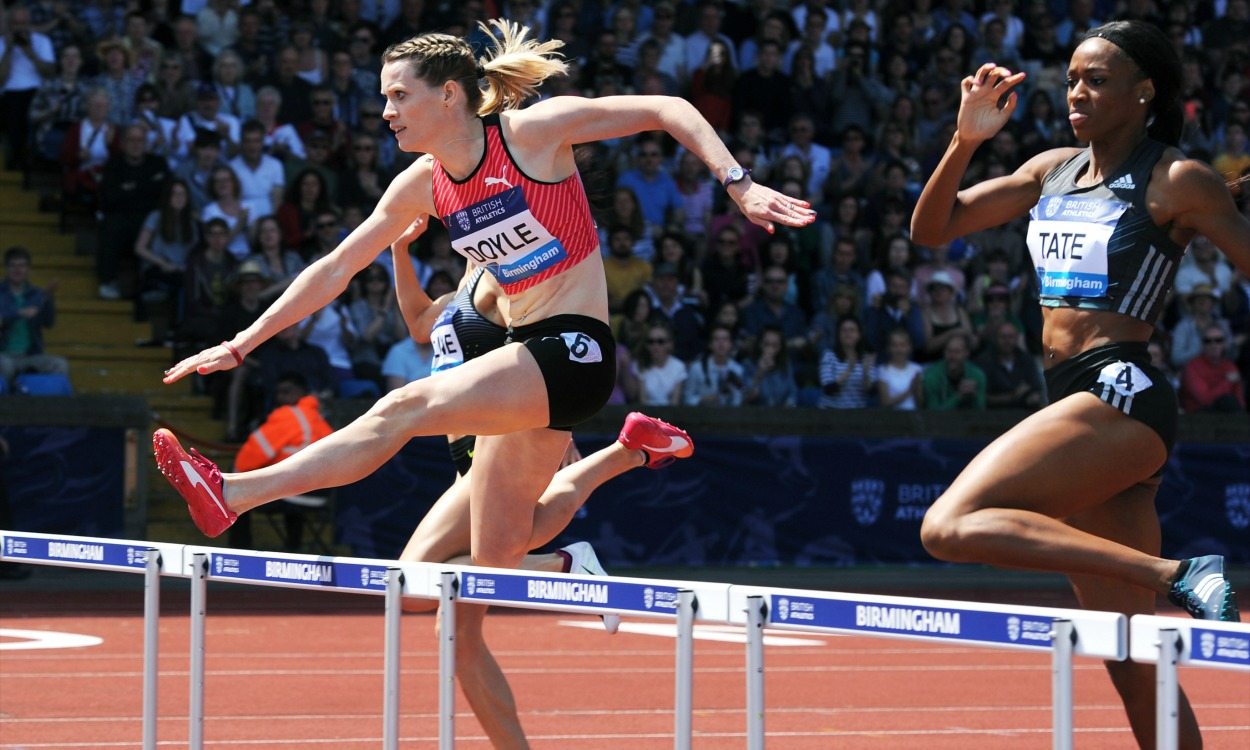 The four races have had quality fields, with Doyle defeating, among others, Kaliese Spencer of Jamaica and 2015 World Championships bronze medallist Cassandra Tate.

Doyle, known by her maiden name of Child until she was married in October 2015, was delighted with her early-season form. “I have always been notorious at opening up the season slowly,” she said. “But this year I didn’t want to do that. I wanted to get that monkey off my back. The winter had gone really well. I had no injury and no illness and no gaps. Normally you get a cold or something and miss a block of training but I had nothing. We went to Tenerife in February and my training went really well so I knew from my target times that I was in good shape.

“I went to Doha confident that I could run a fast time reflecting the shape that I was in. I wasn’t surprised at the time I ran. It was what I was expecting but I was surprised the way I won the race and I think I may have surprised some other people as well.”

So just how did she get into the sport? When her big sister won a cross-country race and then joined a running club, Doyle went along to keep her company – and later won the same cross-country race herself. As a teenager she mainly did long distance, cross-country and 800m, but she also enjoyed the sprint hurdles because she thought hurdling was fun.

“Then we sort of combined sprint hurdles and 800m to try the 400m hurdles,” she said. “When I started winning things I knew I had found my event.”

“We sort of combined sprint hurdles and 800m to try the 400m hurdles. When I started winning things I knew I had found my event”

However, she could have gone in a different direction. Her mum swam for Scotland and Doyle was the Scottish under-13 butterfly champion. Initially she tried both sports, noting: “The swimming seemed to help the athletics, but the athletics had no effect on the swimming. Then the more success I had in athletics, the more I came away from swimming.”

She qualified as a PE teacher while competing in her spare time before taking the decision to leave Scotland and move to Bath to work with Malcolm Arnold. She explained: “At that stage I feel I was in good shape but I wasn’t hurdling well and I was stuttering into the hurdles and I just thought, ‘Who is the best person to get me out of that habit?’ I thought it was Malcolm so I spoke to him and he said ‘come down and join our group.’ It was hard in the sense that I am quite a home bird and I like being near my family so it was hard to move away from home.”

In 2013 she took silver in the European Indoors in Gothenburg, running 51.45. “I surprised myself,” she said. “The whole point of that indoor season was that Malcolm wanted me to be a bit more aggressive and more assertive. The year before I had not been getting out fast enough, so Malcolm said, ‘Let’s do an indoor season to improve your speed’. Indoors you have to go out fast to win the breaks and the whole point of it was just to get me to race a bit better. But with every race I was getting better and taking chunks off my time. I never expected to go as fast as I did but it was brilliant.”

The year 2014 was a stellar one for Doyle when she took silver in the Glasgow Commonwealth Games and then became European champion. “Glasgow was just incredible,” she said. “My big highlight was the lap of honour – not so much winning the silver medal. While winning the Europeans was the bigger achievement than the Glasgow silver medal, Glasgow was a better experience – the lap of honour, the stadium and the atmosphere were just incredible and something I don’t think I’ll ever experience again.”

Doyle gives much of the credit for her progress to Arnold. “When I first met Malcolm I was quite intimidated by him, scared of him and had a real need to please him but I have got to know him over the years,” she said. “At first he would give me my training and I would take it and do it because he said so. Now there’s a difference in the relationship and we chat about things more.

“And just as I know him better so he knows me better and knows he can trust me. I feel I really get him now. He has a very dry sense of humour and can be a grumpy old man sometimes, but I know how to take him. But above all he is just a brilliant coach. He is my coach and a mentor but he has also become a friend.

“While winning the Europeans was the bigger achievement than the Glasgow silver medal, Glasgow was a better experience – the lap of honour, the stadium and the atmosphere were just incredible and something I don’t think I’ll ever experience again”

“I lived with him and his wife for a few months as I was waiting for my flat so I suppose I see him as a grandfather. He will hate me for saying that! I have this massive respect for what he’s done.

“We train six days a week, but it has changed a bit this year. It used to be two gym sessions and four track sessions but this year it is one gym session and five track sessions. It is hard training. One of those sessions is hurdling, which usually involves going over all 10 hurdles and a lot of volume. Some coaches work with a build-up and then an easy week. Malcolm doesn’t really do that but puts the onus on you to say, ‘I feel tired today. Perhaps we should cut the session down a bit.’

“It is very high-tech. We have an intern, a girl called Sophie, who is a biomechanist at the university and she videos everything and can give you breakdowns on the run, your touchdowns and so much information.”

At the 2015 World Championships in Beijing, Doyle was sixth in 54.78 behind winner Zuzana Hejnova. While many would see sixth in the world as a good achievement, Doyle was frustrated. “I just didn’t execute the right race,” she admitted. “I was disappointed with the hurdling and it was all a little bit messy. I feel like I should be among the medals or at least closer and I just feel like I’m throwing these opportunities away.”

Next up is Rio and she has a steely determination to build on her good winter and strong season to be battling for a place on the Olympic podium.