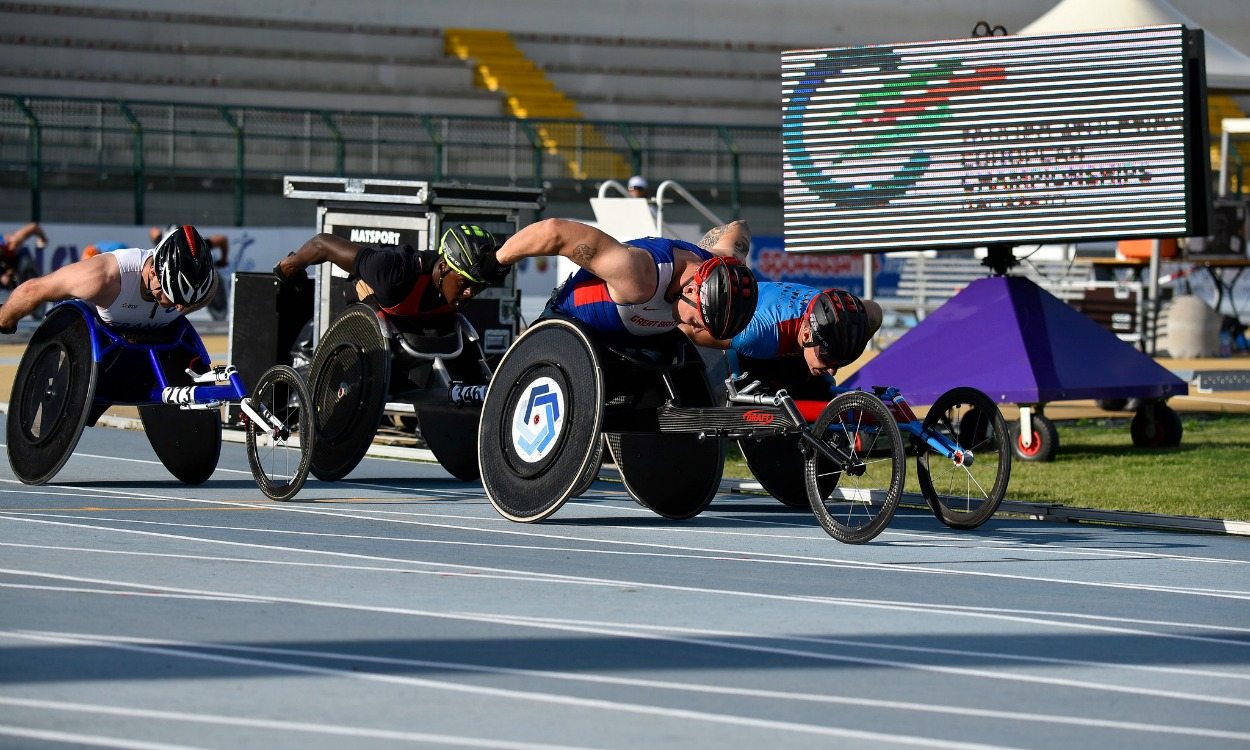 In scenes reminiscent of London 2012, Weir moved away from his rivals with ease in the home straight to power to the European gold medal in a time of 11:15.95.

“I knew coming in here that I was in good shape. I haven’t done a 5000m on the track this year but I have the speed from the road and the mile I did the other week, so I’m happy to transfer that on to the track,” he said. “I’m getting lots of mileage in on the road but also some quality speed work on the track.

“My speed looked good on the last lap – 22 mph is pretty good for me but there is a bit more to give and that is good for the shorter stuff such as the 800m and the 1500m. I’m happy with any medal here at the Europeans but it is all looking good for Rio.”

This followed a remarkable T42 100m final which saw Richard Whitehead take a narrow win in the last couple of strides. It took a 12.21 (-0.3) clocking to take the gold medal and earn another visit to the top on the podium. David Henson earned a personal best of 13.07 to take seventh place.

Just three centimetres shy of his own world record, Aled Davies looked in fine form in the F42 shot put final. His third round effort of 16.11m was the culmination a great set of throws.

“I love titles. I took my first European title in Swansea so I wanted to retain it,” he said. “I wouldn’t have been happy this evening if I hadn’t won. I’ve shown people what I am capable of doing and I’m excited for the year ahead because I know I am just scratching the surface.”

Earlier Maria Lyle had captured her third European title in the T35 100m final and this shows the progression the 16-year-old is making in her build-up to the Games in September. She recorded a time of 14.45 (-0.9).

After disappointment in Doha at the world championships last year, there was elation for Richard Chiassaro who secured his first European title over the T54 200m. By his own admission, he is stronger in the 400m and 800m, so this victory will show his rivals that he is an athlete in top shape, especially with a championship record of 25.14 (-0.3). Compatriot Nathan Maguire completed a successful debut appearance for GB with a career best of 26.48 for seventh place.

The Weir-Archer Academy athlete was delighted to seize the gold: “It feels great – I’ve never been a European champion over 200m before. It was a fast race – the field is getting really strong. It’s all helped me as I look forward to the 400m tomorrow and was a real eye opener.”

The women’s T38 200m final was a stunning race as Sophie Hahn and Kadeena Cox took silver and bronze respectively in personal best times. Hahn ran 26.67 (-0.3) taking 0.15 seconds off her previous best as she was pipped in the last few strides by Russia’s Margarita Goncharova who set a world record of 26.46. Cox won the bronze lowering her previous best to 27.40. Olivia Breen finished in seventh in 28.37.

There was further bronze medal success in the T51 100m as Steve Osborne finished in 22.05 (-0.1), matching his result from Swansea two years ago.