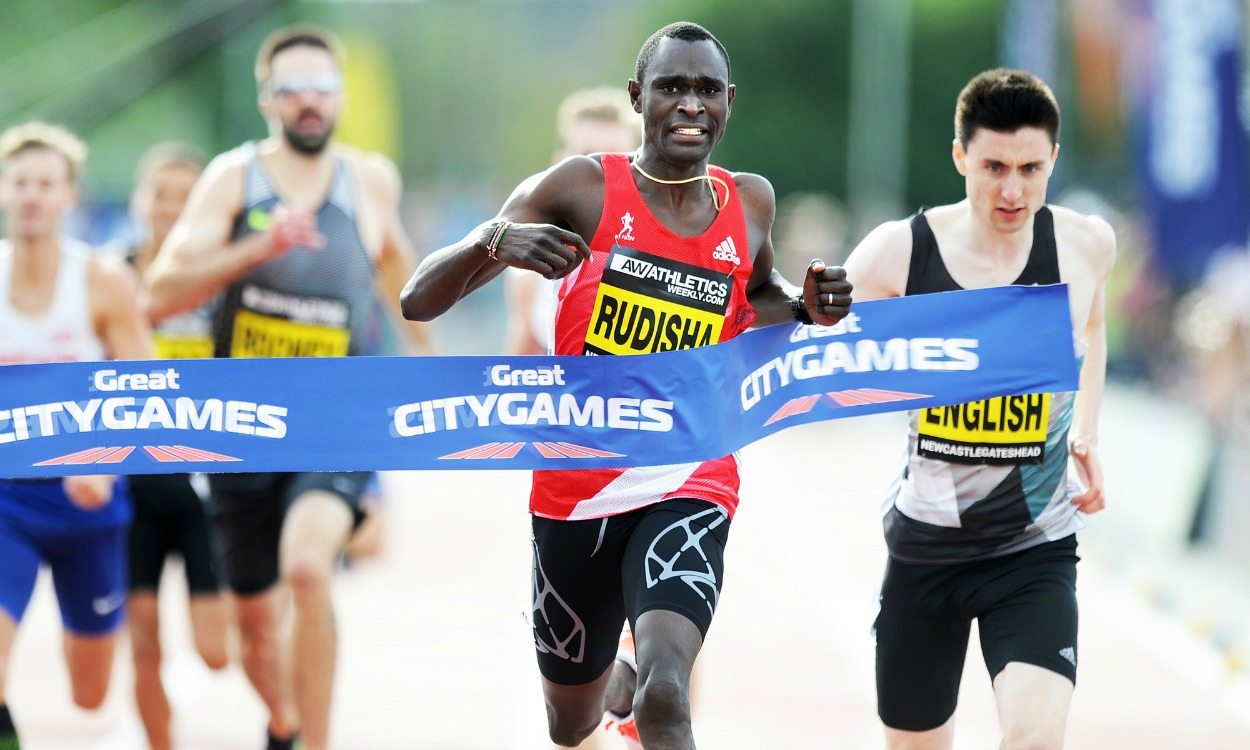 The distance of 500m isn’t one raced all that often but world 800m record-holder David Rudisha proved he is the master over that too as he broke the world best at the Great North CityGames on Saturday (September 10).

On a sunny afternoon at the Newcastle and Gateshead Quayside, the Kenyan used the speed which has seen him clock 45.50 for 400m and 73.10 for 600m in the past to run the world’s quickest ever time of 57.69 as he beat Ireland’s European indoor 800m silver medallist Mark English, who won this event last year, with 57.91 and Britain’s European 400m champion Martyn Rooney with 59.02.

Rudisha retained his Olympic title in a time of 1:42.15 in Rio and in Gateshead he returned to the track, albeit for only half of his race. With the 500m event taking runners from the road on to Mondo, Rudisha later explained how it had been the first time he had ever raced while not wearing spikes.

Behind the top three was a quartet of Brits – hurdlers Seb Rodger and Jack Green, 800m man Elliot Giles and hurdler Jacob Paul.

“It’s awesome to run in such an event where people are close and supportive,” said Rudisha. “To have a CityGames in the middle of the city I think is one of the greatest ideas. It’s unique because it’s not what you see every day.

“I don’t think there’s a better way to finish a season that run here. There’s of course less pressure – it’s not an 800m. I started my career in 400s and 200s so I have that speed. Running something less than 800m, from 400m upwards, is my favourite distance.”

On his winning tactics, he added: “I knew they were going to push the first 300m so I knew I needed to be right there with them and use my advantage [from running 800m] in the final 150m.

“Rooney took off and I was right behind him. Just around 180m to go I decided to charge.

“It was quite tactical. That’s why I decided to let one of the fastest 400m guys lead. I didn’t want to let the gap widen up so I left it there.”

Another best mark had earlier been broken in the women’s 150m as Britain’s Desiree Henry ran 16.57 – a European best for the straight-run distance.

Henry was among the athletes to have made the trip from Brussels after the Diamond League final to Newcastle for the CityGames and after running 11.12 to finish fourth over 100m in Belgium she showed further top form with her street run including a ‘flying’ 100m of 10.39 from 50m to 150m.

It has been a superb season for Laura Muir and the British 1500m record-holder ended it with a win as she clocked 4:33.99 to take the women’s mile ahead of fellow Briton Alison Leonard and USA’s Katie Mackey.

Always to the fore, Muir, who broke Kelly Holmes’ national record in July and then further improved it to 3:55.22 last month, gradually picked up the pace and moved away from the field with 200m remaining, holding on for victory ahead of Leonard’s 4:34.42 and Mackey’s 4:35.96.

Muir’s fellow Rio representative Laura Weightman finished fourth in 4:36.74, one place ahead of Eilish McColgan who had run an almost five-second 5000m PB in Brussels the evening before. Steph Twell was sixth and Sarah McDonald seventh.

After the disappointment of missing out on the Rio Olympics, Britain’s Jake Wightman also finished his season on a high note as he beat a men’s mile field including USA’s Bernard Lagat and fellow Briton Andrew Butchart, who had placed fifth and sixth respectively in the Olympic 5000m.

Showing impressive finishing strength, Wightman was ahead as the race went from the road to the final track finishing straight and held on to clock 4:05.70 ahead of Poland’s European indoor 800m champion Marcin Lewandowski with 4:05.98 and Australia’s Ryan Gregson with 4:06.21.

Tom Lancashire and Adam Clarke were next over the line, ahead of fellow Briton Charlie Grice, who was among the athletes who had travelled from Brussels. Lagat was seventh in 4:08.70, again one place ahead of Butchart.

As in the men’s event, the women’s 500m was led by 800m specialists as Britain’s Olympic sixth-placer Lynsey Sharp beat GB team-mate and Rio semi-finalist Shelayna Oskan-Clarke 66.62 to 66.89. Sprinter Anyika Onuora was third in 67.04 from Adelle Tracey, Laviai Nielsen and Seren Bundy-Davies.

The men’s 100m was a close race as James Dasaolu narrowly pipped CJ Ujah, with just one hundredth of a second between them. Dasaolu’s winning time was 10.21 (+0.5), while Barbadian sprinter Ramon Gittens was third in 10.38. It was a similar situation in the men’s 150m as two Britons dominated and were separated by one hundredth of a second – Danny Talbot running 15.06 to Richard Kilty’s 15.07.

South Africa’s Carina Horn was one of the athletes to have had less than ideal preparation after her flight from Brussels was cancelled which led to a long train journey. Despite that and also a slow start to the race, the African Championships silver medallist powered through to pass USA’s world indoor champion Barbara Pierre and win the 100m in 11.20 (0.0) to the American’s 11.31. Britain’s Asha Philip was third in 11.32 and Williams, in her first race of the day, was fourth in 11.47.

After finishing fifth in the Brussels 110m hurdles, Britain’s David Omoregie clocked 13.75 (+0.1) to win on home soil ahead of USA’s Jarret Eaton, who was eighth in Belgium, with 13.84. USA did get the win in the women’s sprint hurdles though, as Jackie Coward clocked 12.85 and Tiffany Porter knocked a hurdle and finished second in 12.97.

Holly Bradshaw finished as runner-up in this event last year but the British pole vault record-holder couldn’t achieve that sort of success 12 months later as she was unable to clear her opening height of 4.45m. Germany’s Regine Kramer claimed a surprise win after entering the competition at 4.00m and then clearing 4.15m on her second attempt.

Swapping his Strictly Come Dancing sequins back to spikes for a final long jump competition of the season, Britain’s world champion Greg Rutherford leapt 7.66m and although some way off his best it was enough to secure him his seventh CityGames win when combining events in Newcastle and Manchester. Uruguay’s Rio Olympics sixth-placer Emiliano Lasa was runner-up with 7.63m ahead of Britain’s Daniel Gardner’s 7.60m.