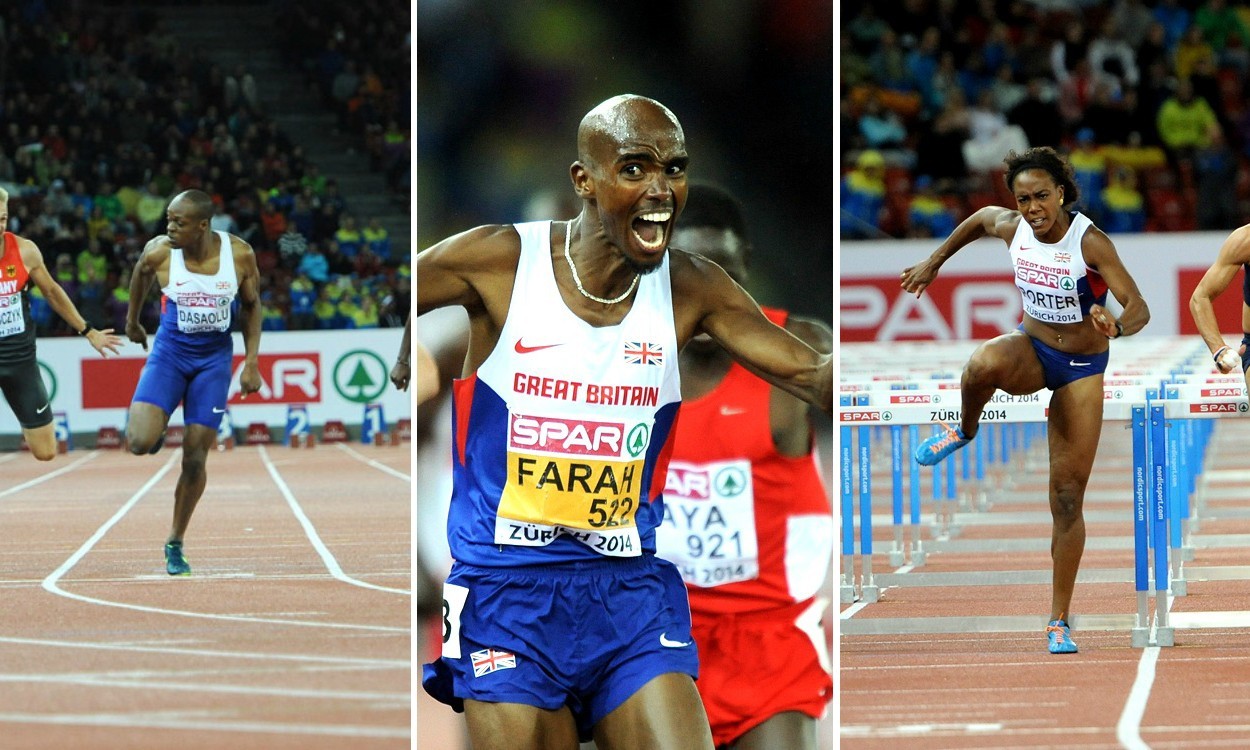 When British athletes won three gold medals on one night at London 2012 the day was named Super Saturday, so perhaps today could be known as Wonderful Wednesday as Mo Farah, James Dasaolu and Tiffany Porter each claimed European titles on a stormy evening in Zurich.

A silver for Andy Vernon and bronze medals for Ashleigh Nelson and Harry Aikines-Aryeetey boosted GB’s medal tally to seven to top the table after two days of competition.

In the 10,000m Farah grabbed gold and Vernon surged to silver as there was a Great Britain one-two in this event for the second time in three European Championships.

Having suffered illness this season and been forced to miss events including the Commonwealth Games, double world and Olympic champion Farah didn’t look his best, but a below-par performance was still more than enough to claim his fourth European gold.

He sat at the back as the race got off to a steady start but easily moved through the field to sit third behind Kaya and his Turkish team-mate Polat Kemboi Arikan as 5km was passed in 14:09. The pace picked up and with a lap to go Farah was to the fore, Vernon losing some ground as he was forced to go wide around a lapped runner. As the final bend approached it looked like Farah was having to work hard but he held on and had enough to kick on the home straight as Vernon moved up the podium places to pip Kaya on the line.

“It means a lot to me,” said Farah. “I was really ill a few weeks ago but training has gone well.

“I didn’t want to let people down after missing the Commonwealth Games,” he added. “Now I’m excited for the 5000m and I hope to run well again.”

Dasaolu added the European 100m title to his indoor 60m silver from 2013, storming over the line in 10.06 to cross clear ahead of France’s defending champion Christophe Lemaitre and British team-mate Aikines-Aryeetey. It had looked as thought it might have been game over for Aikines-Aryeetey after the athletes were called back, but the 2006 world junior champion was shown a yellow card. That didn’t seem to phase him, though, and after the race was restarted he ran 10.22 to deny team-mate Dwain Chambers a medal on his record-equalling sixth Europeans appearance by two hundredths of a second. A time of 10.13 secured Lemaitre the silver.

“It’s great to be the European champion. I’m still trying to take it all in,” said Dasaolu, who has struggled with injury this season. “I didn’t have a great start but I battled through so I’m happy.

“It’s a lovely thing to get my first senior outdoor gold medal, I’m just going to enjoy it. I wasn’t sure if I was going to be here at the beginning of the year.”

Delighted with his bronze, Aikines-Aryeetey said: “I’ve got my medal, I’m kind of speechless. This is a landmark moment for me – I’ve been through so many tough injuries so a big thanks to everyone who’s helped me through.”

Porter also claimed her first major gold with victory in the 100m hurdles and with it won Britain’s first medal in the European sprint hurdles event for 60 years, when back in 1954 the distance was the 80m hurdles and Pamela Seaborne bagged bronze. The 26-year-old, who won world bronze last summer, clocked 12.76 to beat France’s Cindy Billaud with 12.79 and Germany’s Cindy Roleder with 12.82.

“I’m just so happy to win,” said Porter. “This is my first gold medal so I couldn’t be happier.”

Also adding to GB’s medal tally was Ashleigh Nelson in the women’s 100m as she claimed bronze for Britain’s first medal in this event since Andrea Lynch also finished third 40 years ago. The 2008 world junior silver medallist clocked 11.22 in a race won by Dafne Schippers of Netherlands, focusing on the sprints in Zurich rather than the heptathlon. She ran 11.12 ahead of France’s 2010 200m champion Myriam Soumaré with 11.16. Soumaré had earlier run 11.03 in the heats – an equal personal best and world lead for the second-quickest time at that stage of the competition in European Champs history.

Britain’s 18-year-old Desiree Henry, who just missed out on a medal at the recent World Junior Championships, ran 11.43 for seventh in the final having run an 11.21 PB in the heats and then matched that in the second round. In those semi finals her team-mate Asha Philip missed out on making the final by just one thousandth of a second. Mujinga Kambundji had already sliced 0.13 off her own Swiss 100m record in Zurich, running 11.20 in the semi finals, and she clocked 11.30 for fourth in the final.

Germany’s Robert Harting added to his impressive medal collection as he threw a best of 66.07m to win the discus competition by over a metre and retain his title. The world and Olympic champion was joined on the podium by Estonia’s 2008 Olympic champ Gerd Kanter who threw 64.75m for silver and Poland’s World Championships sixth-placer Robert Urbanek with 63.81m for bronze.

French long jumper Éloyse Lesueur was another to retain her title as she leapt 6.85m to beat Russia’s world bronze medallist Ivana Španović by just four centimetres. Russia’s two-time European indoor champion Darya Klishina jumped 6.65m and would have been kept out of the medals if a wrongly-measured mark for Germany’s Melanie Bauschke had stood. But her 6.79m was corrected to 6.55m and she finished sixth.

Andrei Krauchanka of Belarus was just one point off his personal best but his world-leading score of 8616 points was enough for victory in a decathlon competition that had been plagued by weather interruptions. The 2008 Olympic silver medallist seemed to struggle in the final event – the 1500m – but his 4:39.39 for 684 points was enough to see him top ahead of France’s Kévin Mayer who scored a national under-23 record 8521 points and Russia’s Ilya Shkurenyov with a 8498-point personal best to match his place on the podium from two years ago.

A British athlete won each of the men’s 400m semi finals – the races getting quicker as the second round progressed. Matt Hudson-Smith, who clocked a big PB to dip under 45 seconds at the Sainsbury’s Glasgow Grand Prix last month and then anchored England to 4x400m gold at the Commonwealth Games, went quickest with 45.30 in the last semi final as Conrad Williams ran well in lane 8 to win the first in 45.85 and Martyn Rooney was another heat winner with 45.40.

Belgian sprinter Jonathan Borlée finished behind Hudson-Smith in 45.38 to also advance though his twin brother Kevin didn’t do enough to make the final. Ricardo Dos Santos broke his own Portuguese record with 45.74 for third in the second semi final through it wasn’t enough to see him through. He had run 45.81 in the heats to go sub-46 seconds for the first time.

As she’s well known to do, world champion Christine Ohuruogu left it late to come through in her 400m semi final and she automatically qualified for the final with 52.56 for her runner up spot, though she was far from happy with the run. Fastest in the second round was Olha Zemlyak with 51.24 which followed her 51.16 in the heats. France’s Pierre-Ambroise Bosse went quickest in the men’s 800m heats and will be joined in the final by the likes of Poland’s Artur Kuciapski and Andreas Bube of Denmark.

Estonia’s Rasmus Mägi proved his form to clock a national record and European lead in the third 400m hurdles semi final. His smooth run led to a 48.54 clocking and he’ll be joined in the final by the likes of Russia’s Denis Kudryavtsev and local favourite Kariem Hussein. Britain’s three hurdlers – Niall Flannery, Seb Rodger and Tom Burton – didn’t do enough to progress as Ireland’s Thomas Barr also misses out on a place in the final.