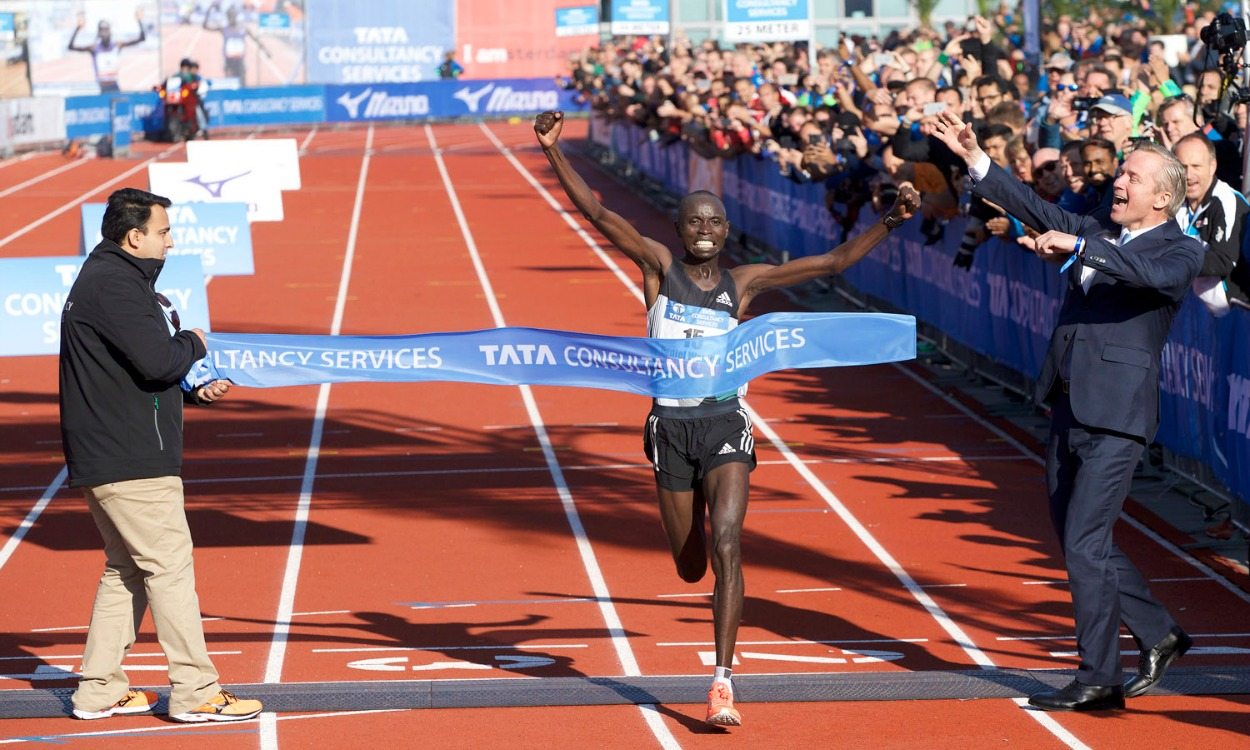 Three-time winner Chebet was also in action but after forming part of the large lead pack past 30km, he eventually finished 12th in 2:08:19.

In sunny and still conditions, the race began at the city’s Olympic Stadium, with Wanjiru, Kitwara and Kimutai all running within a front group of around 18 athletes which passed 10km in 29:48.

As the pack went through half way in 63:18 a couple of athletes were dropped, while Kitwara and his fellow Kenyan Geoffrey Kirui were to the fore.

Kitwara was among those pushing the pace at 30km as the leaders went through in 1:29:47 and it looked as though Chebet was being dropped but he worked his way back up to form part of the lead group before Kitwara, Kirui and Ethiopian 22-year-old Mule Wasihun surged ahead, with Wanjiru just behind them.

With Wasihun dropped and Wanjiru and Kitwara moving away, the eventual winner kicked hard before going through 40km with 1:58:55 on the clock to dip under course record pace and continue on for the win as he ran splits of 63:18 and 62:03.

Laban Korir was fourth in 2:05:54, while defending champion and two-time winner Bernard Kipyego was eighth in 2:06:45 as Kenyan athletes filled the top eight spots. Just behind them was Wasihun in ninth.

“I had a plan but in the race you can expect anything to happen,” added the 24-year-old, who has twice won the Prague Half Marathon and finished seventh in the Frankfurt Marathon two years ago. “The weather was very nice for running.

“This is my first title in the marathon and I have to remember this event in the future.”

The women’s race had seen Melkamu and her fellow Ethiopians Abebech Afework and course record-holder Meseret Hailu form part of the lead group together with Kenya’s 2013 London Marathon winner Priscah Jeptoo. As Melkamu, who won the Hamburg Marathon this year and is also the sixth quickest 10,000m runner in history with her 29:53.80, forged ahead, no one could stick with her and she eventually crossed the line in 2:23:21 to beat Afework with 2:24:27 and Bahrain’s Eunice Chumba with 2:25:00.

Jeptoo, who after suffering injury had said before the race that she had been training pain free and was aiming for a time under 2:23:00, finished fourth in 2:25:57, one place ahead of Hailu with 2:27:50.