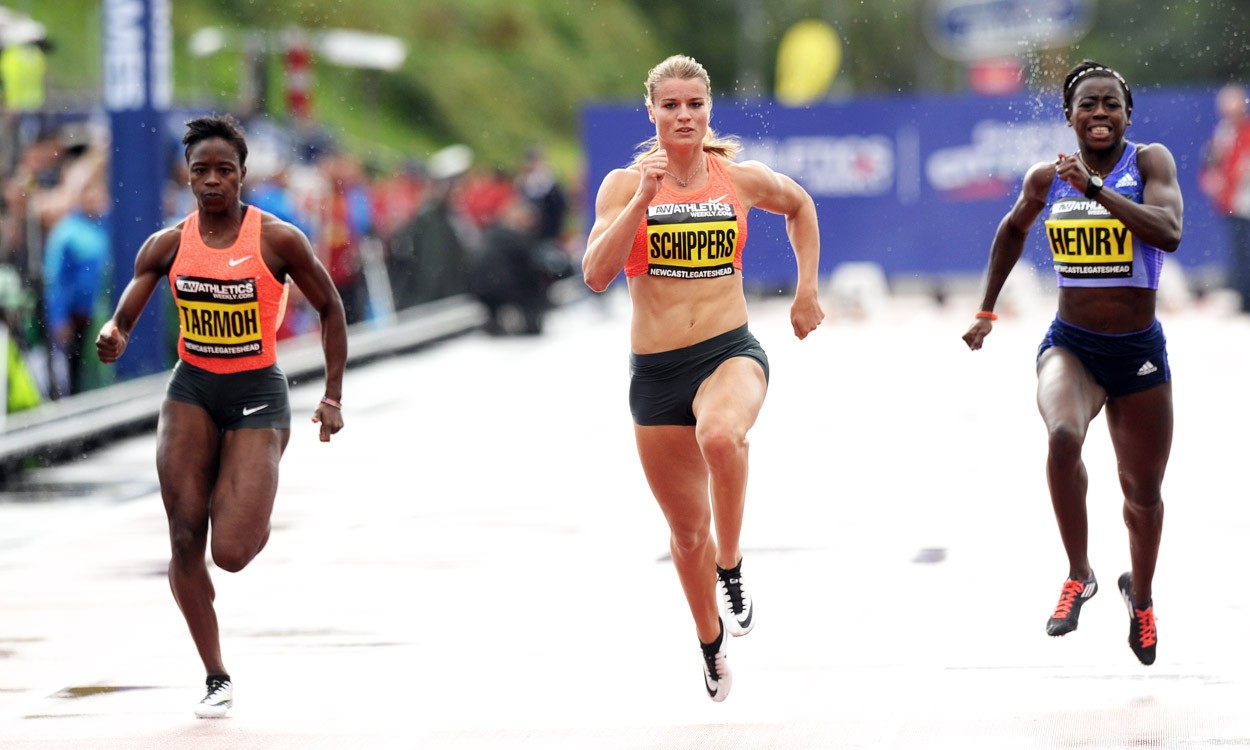 The world 200m champion will face Tianna Bartoletta, Cleo Vanburen and Marika Popowicz at the street athletics event on Deansgate

Dafne Schippers is to return to race at the Great CityGames Manchester on May 20.

For the first time the event will be staged on a Friday evening, between 17:00 and 19:30, and Schippers will be aiming to go one better than her runner-up finish to Dina Asher-Smith in the 150m last year.

This year, Schippers will be gunning for the 100m title on the specially-constructed track on Deansgate, and faces competition from Tianna Bartoletta, Cleo Vanburen and Marika Popowicz, who are all aiming to compete at the Rio Olympics this summer.

Schippers, the world 200m champion, started her outdoor season in devastating style with a 22.25 over the half-lap event in an invitational event in Gainesville, Florida, last week – the fastest time of the year so far.

And the European 100m and 200m champion is aiming for a happy return to Manchester as she continues her preparations for Rio.

“I love taking part in these events,” said the 23-year-old. “Street athletics bring a unique atmosphere, with the crowd so close to the athletes. You don’t get that too often in a season and I’m delighted to be returning to the UK to take part.”

Bartoletta is looking forward to testing herself against the likes of Schippers, with the trials for the USA Olympic team in July.

She said: “This is a really important moment in athletics, with the Olympics so close. I feel really strong and fast. All I can do is my best – there are lots of excellent sprinters in the US so I need to be at my best.

“Coming to Manchester will be a good test ahead of the trials.”

In Manchester the 30-year-old will be up against compatriot Vanburen, who makes her CityGames debut on Deansgate, with the event free to the public.

Vanburen said: “It’ll be my first time in Manchester for the CityGames and I’m looking forward to it. 2016 is a huge year in athletics and with the competition fierce in Manchester it should be a great warm-up for the summer.”

Polish sprinter Popowicz completes the line-up, with her place in Rio almost confirmed having been included on the preliminary list for selection.

She said: “I’m excited about competing in Manchester. I need to be in the best condition I can be for Rio and taking part in the CityGames against world-class opposition is perfect for me.”

In the 200m, British sprinter Margaret Adeoye will return to Manchester having competed on Deansgate in 2012.

The 31-year-old finished third in the 200m ahead of representing GB in the 2012 Olympics, and will be competing for a place in Rio at the British Championships in Birmingham which serves as the trials for the Olympic squad.

She said: “I have some happy memories of competing in Manchester and it would be great to repeat a good performance this time round.

“The main aim for 2016 of course is qualification for the Olympics, and a good performance in Manchester will set me up well for the trials in Birmingham a month later.”

Adeoye will be up against Emily Diamond, who was a reserve in the 4x400m relay team in London, and American Dezerea Bryant.

“Having had a taste of the Olympics four years ago I’m determined to get to Rio, and a good effort in Manchester should prepare me well for the trials in Birmingham,” said Diamond.

“I’m looking forward to making my CityGames debut and hopefully it’ll be a good evening all round.”

The event provides a unique opportunity to see top athletes from across the globe compete in an urban environment. The event takes place on the Great CityGames track on Deansgate in the heart of the city, and at the purpose built athletics arena in Albert Square.