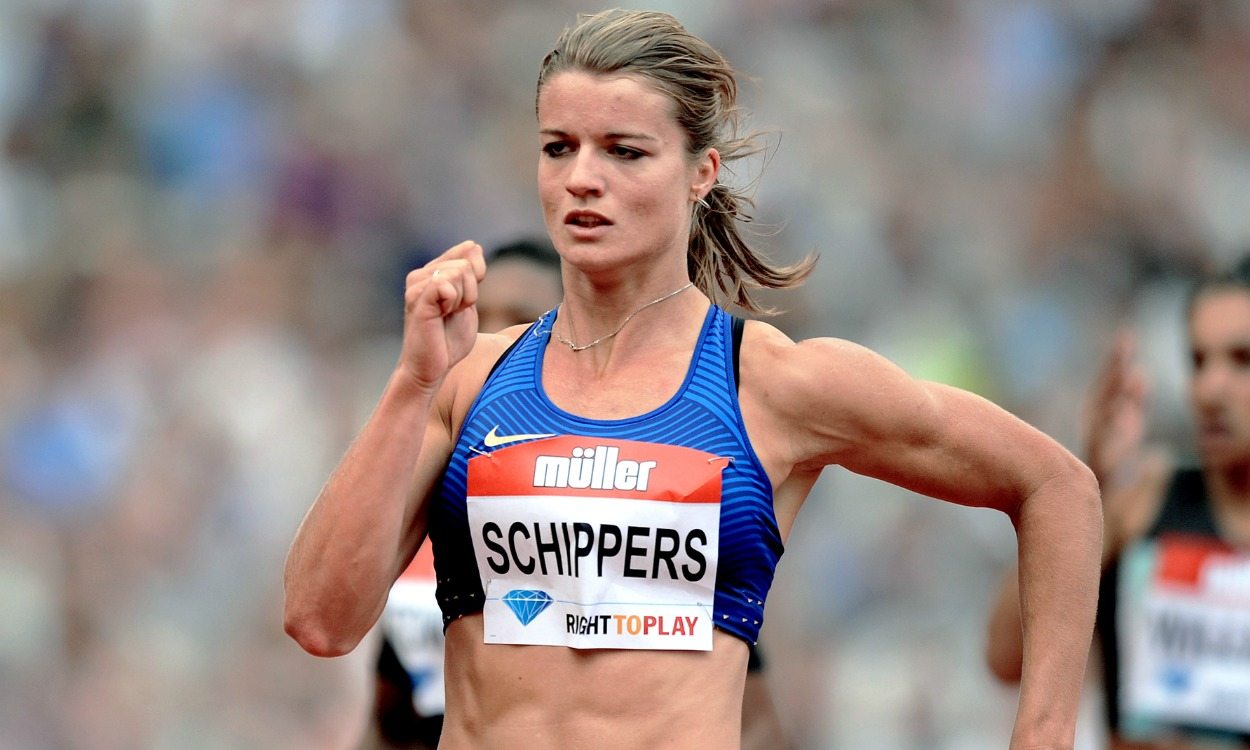 Dutch world champion gets ready for Rio with a comfortable 200m win at the Müller Anniversary Games, while GB 4x100m teams show promise with fast times at Olympic Stadium

Dafne Schippers was among the winners on the second day of Müller Anniversary Games action and her dominant 200m victory gave another indication of her fine form just two weeks out from the Rio Olympics.

A lot has happened in the four years since the Dutch athlete placed 12th in the heptathlon at the London Games, and as she gets ready to go for an Olympic double or triple in Rio after her switch to the sprints, Schippers enjoyed further success with a 22.13 200m victory to just miss the meeting record.

That winning time saw the 24-year-old cross the finishing line exactly half a second ahead of USA’s Tiffany Townsend. Powerful off the bend, the world 200m champion, who also claimed European 100m and 4x100m titles earlier this month, stormed down the straight to beat a US trio, with Joanna Atkins and Jeneba Tarmoh following Townsend, as Britain’s Jodie Williams was fifth in 22.99.

“I’m happy for now,” said Schippers. “I came here to win the race and I feel like the time will come in Rio.”

The 2016 200m world leader, who has five of the nine fastest times for the distance so far this summer, added: “I’m comfortable with being tagged as the favourite, I’m never nervous which is good for me.

“I hope to go for two or three medals. I need a little bit of rest now and then go to the Olympics.”

The day after their female counterparts broke the British record, Saturday’s competitive race saw the ‘A’ team clock a world-leading 37.78 to come close to the national record of 37.73 set in 1999 ahead of a ‘B’ team which ran 37.81.

When asked about GB’s 4x100m chances against Jamaica in Rio, sprint superstar Usain Bolt had said: “It’s very slim, I must say, but anything is possible!” The GB teams in London proved they will put up a strong fight.

James Dasaolu, Adam Gemili, James Ellington and CJ Ujah combined to clock the world-leading time, which is the third fastest-ever time by a British quartet after the 37.73 in 1999 and 37.77 in 1993, while the ‘B’ team comprised Richard Kilty, Harry Aikines-Aryeetey, Danny Talbot and Ojie Edoburun.

GB is sending a 4x100m squad of nine to Rio, with Nethaneel Mitchell-Blake, also selected for the individual 200m, the only team member missing in London.

“I think our running is doing the talking,” said Ellington. “We’re not going to get over-confident and start talking about ‘we’re going there and going to do this and that’. As long as we stay focused and keep doing what we’ve been doing all year there’s no reason why we shouldn’t be contending for medals.”

Dasaolu added: “We’re strong as a nation. If anyone gets hurt, we’ve got people to step in. We’re a conveyor belt of sprinters at the moment.” 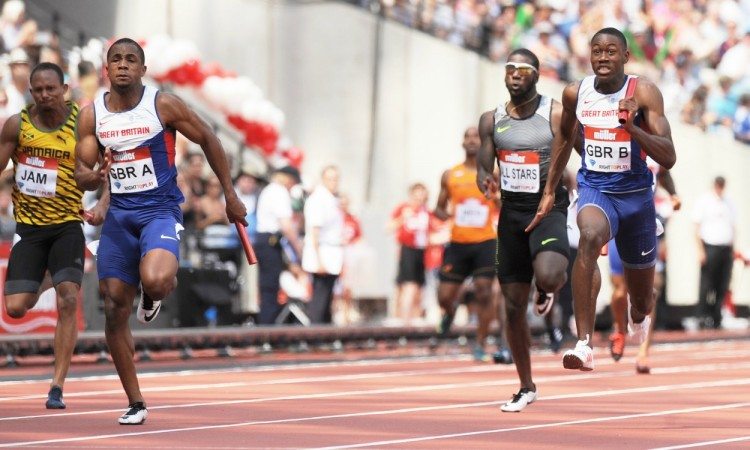 Fresh from forming part of the GB 4x100m team to run 41.81 on Friday, Dina Asher-Smith and Desiree Henry placed fourth and sixth with respective times of 11.09 and 11.17 in a 100m final won by Ivory Coast’s Marie-Josee Ta Lou in 10.96. That winning time matched the PB into a -1.3 headwind that the Ivorian sprinter had run to win her heat, and while Jamaica’s Shelly-Ann Fraser-Pryce won the other heat in 11.03, she placed third in the final in 11.06 behind Trinidad and Tobago’s Michelle-Lee Ahye.

Katarina Johnson-Thompson proved that she has been working hard to put to rest the demons of Beijing where three fouls saw her fail to record a mark in the long jump, ending her world gold medal hopes in the heptathlon.

Just 18 hours after clearing an outdoor PB of 1.95m in the high jump on the first evening of Anniversary Games action, the European pentathlon champion returned to record an impressively consistent series of jumps, led by her winning leap of 6.84m in the fourth round. She also jumped 6.63m, 6.61m, 6.78m, 6.69m and 6.60m as every mark was an improvement on her previous season’s best of 6.55m, with her winning distance her second furthest ever outdoor jump after her 6.92m PB from 2014. She also jumped 6.93m indoors last year.

“I am happy with that, there was good consistency throughout my jumps,” said 23-year-old Johnson-Thompson. “It is obviously good to get the win on this stage and it gives me confidence as I focus on the heptathlon at the Olympic Games.”

Also in action was Johnson-Thompson’s fellow heptathlete Jessica Ennis-Hill but after running her second quickest ever 100m hurdles time with 12.76 in her heat on Friday, the Olympic and world champion was disappointed with a best leap of 6.19m.

“I feel like I am in a good place going into Rio but I would have loved to have jumped further today,” said Ennis-Hill. “I would have liked to have got closer to my PB and taken some confidence from the long jump but it reminds me that there is still a bit of work to do. I have to keep focused and work hard.”

Rio-bound Andrew Pozzi stepped things up another notch as he clocked a 13.19 PB to win his 110m hurdles heat, a mark which moved him to fourth on the UK all-time list. Before this year, injury struggles meant he had only competed outdoors once since pulling up in his heat at the London 2012 Olympics, but he was unable to build on that mark in the final as he pulled out ahead of the race, British Athletics describing it as a “precautionary measure”.

With the field already down to eight because of Pozzi’s withdrawal, it was further reduced by two as first Britain’s Lawrence Clarke was disqualified for a false start and then USA’s Jarret Eaton left the track for the same reason.

France’s Dimitri Bascou had won his heat in 13.28 and he returned to dominate the final, clocking 13.20 ahead of Germany’s Gregor Traber with 13.45. Britain’s European under-23 champion David Omoregie finished fifth in 13.64.

Sandra Perkovic claimed Olympic discus gold in London four years ago and she secured another win in the Olympic Stadium with a meeting record of 69.94m in the second round to add to her Diamond League victories this season in Shanghai, Eugene, Oslo and Stockholm. Any of her six throws would have been enough for the win as she beat Australia’s Dani Samuels with 64.10m and English record-holder Jade Lally with 61.65m.

In a long jump competition missing Britain’s Olympic, world, European and Commonwealth champion Greg Rutherford, it was China’s Xinglong Gao on top with his opening leap of 8.11m to win ahead of Jamaica’s Damar Forbes with 8.05m.

» For further coverage of the Müller Anniversary Games, which incorporates the London leg of the Diamond League series, click here, and see the July 28 edition of AW magazine for 13 pages of reports, pictures and results from London