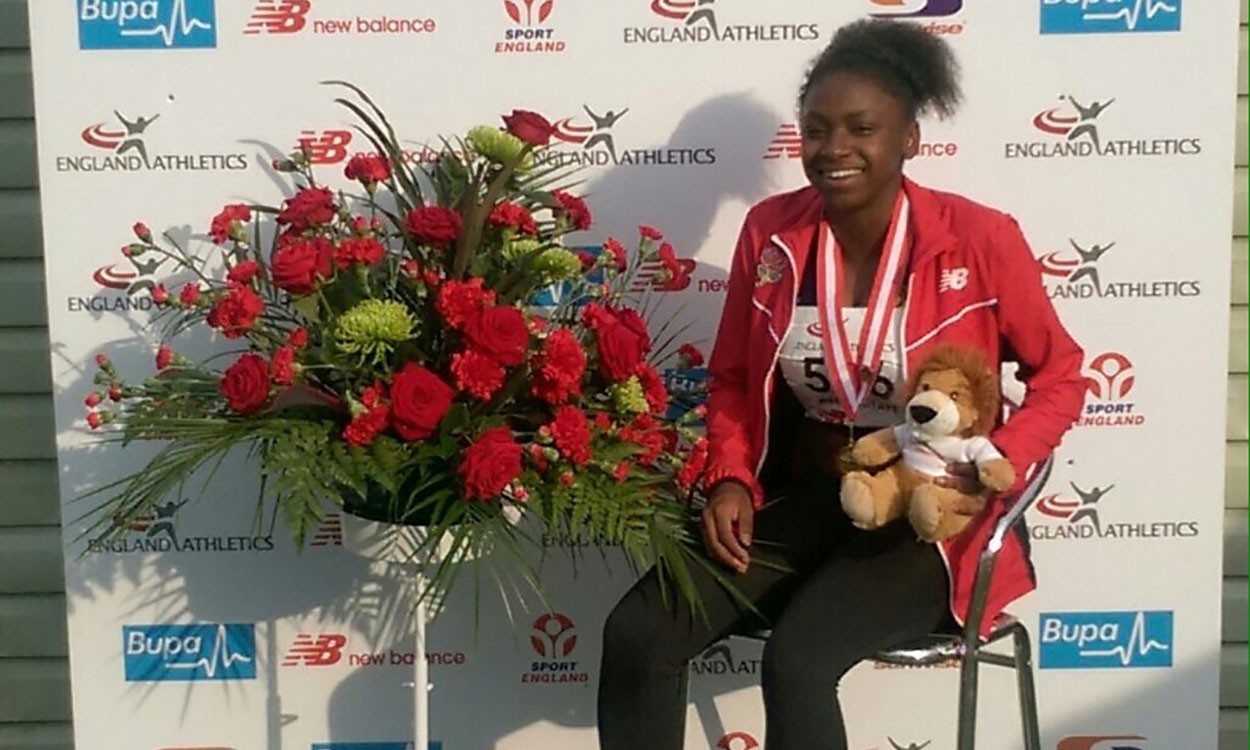 Having won English Schools, England Athletics under-17 and Sainsbury’s School Games 100m titles this year, it is fitting that 15-year-old Charmont Webster-Tape is known as ‘mini Dina’ by her second claim club, Blackheath & Bromley Harriers, particularly as she names the British 100m and 200m record-holder Dina Asher-Smith as her favourite athlete.

Judging by Charmont’s 11.84 100m speed and championships pedigree in her first year as an under-17, she is arguably quite justified to set her sights on emulating the achievements of her idol.

“When I first joined Blackheath second claim, no one knew my name and after my first competition they said I reminded them of Dina and so my nickname started,” she explains. “I was over the moon when I met Dina and she started to call me ‘Mini Me’! I hope I can follow in her footsteps,” the first claim Sutton and District athlete continues.

“Allyson Felix is my other favourite athlete as she is so graceful and humble,” she adds.

Having won under-15 national titles last year, Charmont had tasted success before, but even she was a bit surprised with her achievements this year.

Reflecting on the season, she says: “The highlight of my season was winning English Schools as not only did I win, but I ran my first sub-12. I was very pleased to go sub-12 again when winning the England Athletics under-17 Championships. The UK School Games was fun, as I was able to spend four days in a competitive atmosphere with some of my closest friends. It felt great to win and finish on a high.”

“When I first joined Blackheath second claim, no one knew my name and after my first competition they said I reminded them of Dina and so my nickname started … I hope I can follow in her footsteps”

Looking ahead to another year in the age group, Charmont hopes to retain her titles and improve her time, but also has her sights set on gaining selection to represent Great Britain at the European Athletics Youth Championships – a new event for under-18s held in Tblisi next July. More long term, Charmont wants to make it to the 2020 Olympics.

Speaking of her training set-up, Charmont says: “I get a lot of support and encouragement from the older members of the group, but they also play jokes on me. I was stung by a bug when running hills one Saturday and ended up in hospital for a couple of days. Now, whenever we do hills, the other athletes make buzzing noises around me to scare me.

“Since starting training with Lorna, I have developed more as an athlete and a person and have become more independent.”

Boothe also feels she has seen personal development in her young charge, since taking her under her wing.

“When Charmont first joined the group, I found her a bit of a handful as she has so much energy and was still very young and loved to talk,” she says. “She has really developed in the past year, which has given me a sense of achievement and she is fun to coach. She has a commitment and stubbornness seen in champions,” adds Boothe, who herself was a 13.07 100m hurdler in the 1980s.

Studying for her GCSEs at Harris Academy in Morden, Charmont is quick to credit the support she has received from her school in relation to her athletics. She would like to go on to university to study history and law, with hopes of becoming a lawyer. Those around her think this career path would suit her.

“I am a chatterbox so my dad told me being a lawyer would be a good choice. Also, I did a debating competition at school and my teachers told me I could talk for England,” jokes the bubbly teenager.

So if Charmont does not make it as a GB athlete, at least she knows she has the ability to represent her country in another, vastly different, field!

You can find further performance stats on Charmont on Power of 10 here.