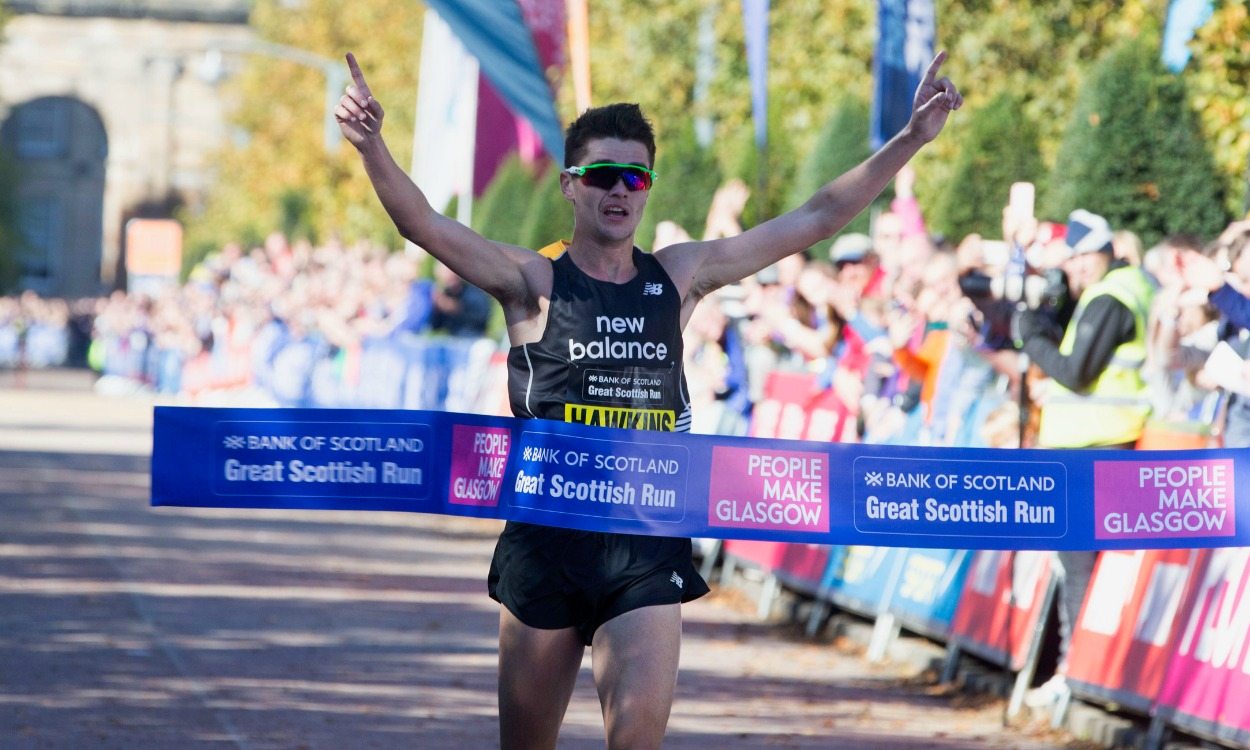 Olympic marathoner moves to second on the UK half-marathon all-time list with 60:24, while Betsy Saina wins women’s race in a course record and PB time

Callum Hawkins admitted he was in shock after a stunning performance on Sunday (October 2) which saw him produce the fastest half-marathon ever seen in Scotland at the Bank of Scotland Great Scottish Run.

In what turned out to be perfect conditions the 24-year-old Scot, who had impressed so many in Rio with his ninth-placed marathon finish, fought off last year’s winner Moses Kipsiro to obliterate the Scottish record in a time of 60:24.

Allister Hutton’s mark had stood at 62:28 so, if Rio raised eyebrows then this performance underlined the burgeoning talent Hawkins clearly has at his disposal. From the outset he was in a group of three – including Kipsiro and Kenya’s Joel Kimutai – which led the way before it gradually became a straight shootout between Hawkins and the Ugandan.

There was to be no let-up in pace as the foggy early conditions gave way to glorious sunshine and, when it emerged that Hawkins had in fact broken his 10km personal best as the race unfolded, something special looked possible.

And so it proved. After a number of attempts to break Kipsiro, Hawkins made the decisive move with a little over two miles to go and stormed his way to victory. Crossing the line, he turned around to double check the clock. In-keeping with much of the celebrating home crowd, his jaw hit the floor.

He is the first Scottish man to win the event since 1983 and is now second behind Mo Farah in the British all-time rankings.

“I’d no idea what time I was on for,” said Hawkins, whose previous half-marathon best of 62:36 came when he finished runner-up to Kipsiro at last year’s event.

“I was hoping for closer to 62 but I didn’t think I could get anywhere near 61, let alone break it. When I looked up at the clock, I probably slowed down because I was in shock. I just saw 60-something, I started looking around because I thought it was the wrong clock. But the crowd were unbelievable. It was just fantastic.”

In the women’s race, Betsy Saina was out in front from gun to tape as she stormed to victory in a personal best of 67:22. Her Kenyan compatriots of Helah Kiprop and Doris Changeiywo were a distant second and third in 68:52 and 71:34 respectively.

Saina will now weigh up her options as she considers making a possible marathon debut in the spring.

“I took some time off after Rio so I haven’t done much. My goal today was just to go out there and have fun. I didn’t want to worry about my time – I just wanted to keep going until my body was done and that’s exactly what I did. I surprised myself with my personal best.”

Britain’s Lily Partridge was happy with her fourth place in 71:39, while Beth Potter secured a big personal best in fifth with a time of 72:07 in front of her home crowd.

» See the October 6 edition of AW magazine for further reports, pictures and results from the Bank of Scotland Great Scottish Run