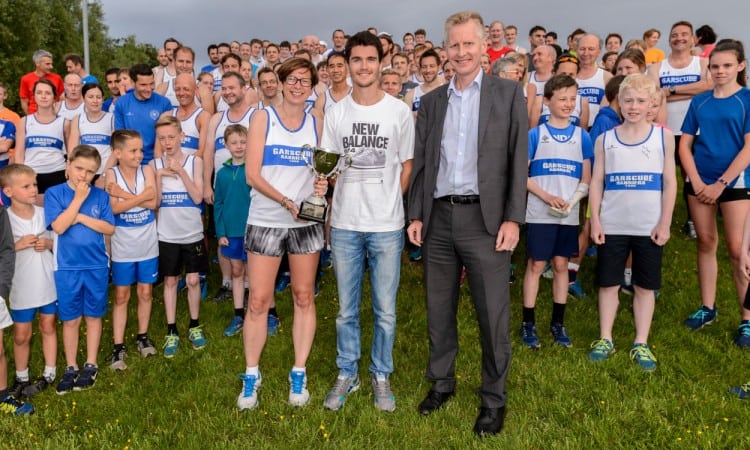 Callum Hawkins insists he is firmly on the road to recovery following his Commonwealth Games marathon collapse – and is weighing up his race options for later in the year.

The 25-year-old Rio Olympian is very much back in training, now covering around 80 miles a week, after the Gold Coast experience which brought so much attention earlier this year.

He did get back to racing at the recent Vitality London 10,000, though 42nd spot was hardly in line with his usual expectations and he said: “I’m up to about 80 miles a week now and training is a lot better than it was a couple of weeks ago.

“We’re not at the stage where we can confirm what may happen later in the year – there could be a marathon come December if things go well or there are a number of half-marathon opportunities.”

Hawkins was speaking as he took a break from his training schedule to connect further with the athletics community and help governing body Scottish Athletics present Garscube Harriers with the Lindsays Trophy for cross country participation at three national championship events over the winter.

The Glasgow-based club had no fewer than 106 finishers at the Lindsays National XC, topping the table with a total of 230 athletes across events at Falkirk, Cumbernauld and Kirkcaldy.

“What’s happening at Garscube is a great example of club development in Scotland,” said Hawkins, who has twice been a senior Lindsays National XC champion, as well as a European cross country individual bronze and team gold medallist.

“I presented the Lindsays Trophy last year to Giffnock North and was more than happy to get involved again this year because I think cross country is really important to the sport in Scotland.

“It was how I started out, really, and looking back that’s where I had early success – rather than in road running. My first Scotland and GB and NI vests came via cross country.

“I wasn’t able to race there this year with the Commonwealth Games coming up but, having been at Falkirk so many times in the past, I think there’s no doubt it’s an occasion where you can really feel the growth of the sport and sheer number of different club vests on show is always good to see.

“It looks like the overall Lindsays Cross Country Season is growing year on year, too, with over 100 clubs featured in at least one of the three events at Cumbernauld, Kirkcaldy and Falkirk this time. I think what is happening is people are losing any fear of competing. Clubs are getting better numbers out and then they compete with each other.”

Trophy holders Giffnock, who won this award in 2016 and 2017, held an advantage heading into the Lindsays National XC at Falkirk but Garscube galvanised their members and top the table by 16 athletes.

In a hugely positive aspect for the sport, the 2017-18 table reveals that 103 different clubs from the length and breadth of Scotland had at least one finisher over the three XC events.

Garscube Harriers president Jill O’Neil said: “Every year we make a huge effort to encourage all of our athletes out to the cross country to compete, spectate and support and it’s fantastic to be recognised in this way.

“The National championship events across the season encapsulate all that is good about athletics in Scotland right now and we thoroughly enjoy being part of them.”