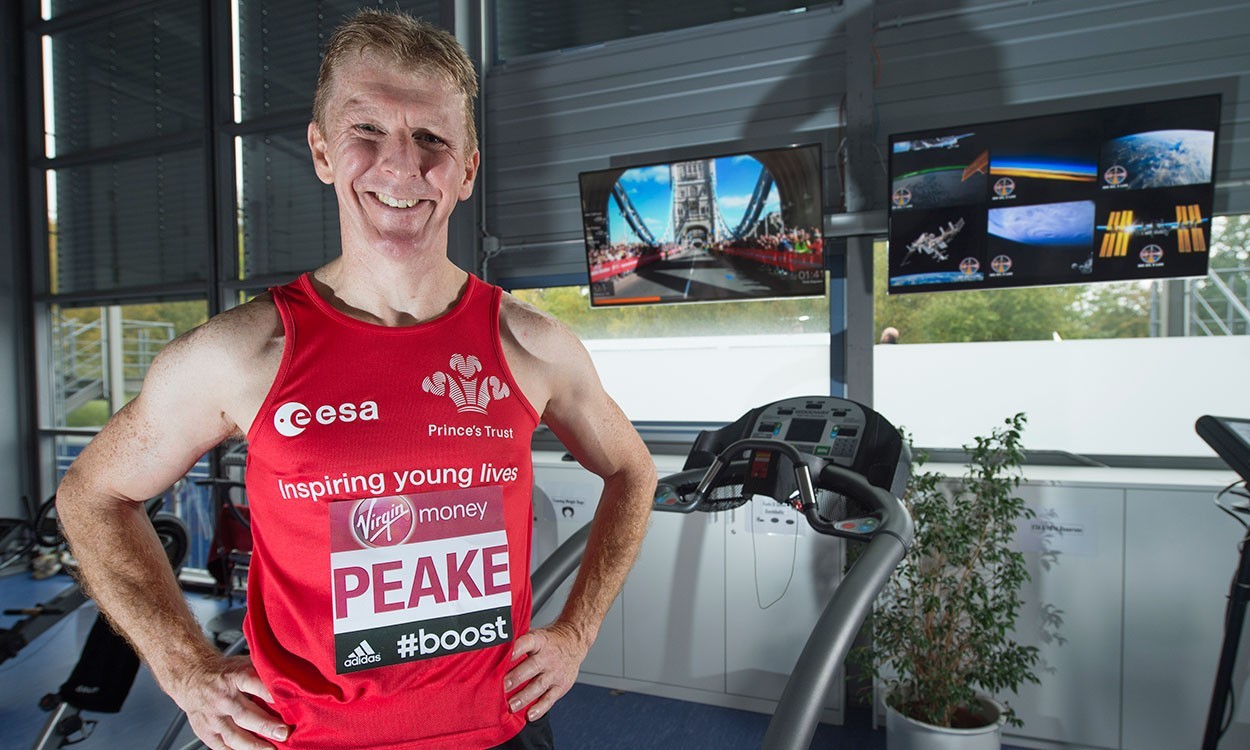 Set to be the first British man in space, Tim Peake will also look to achieve another first and run the London Marathon while out there, taking the Digital Virgin Money London Marathon to another level

British astronaut Tim Peake will become the first man to run the London Marathon in space when he takes on the Digital Virgin Money London Marathon on the International Space Station (ISS) on Sunday April 24.

It will be another extraordinary first for Peake who is the first Briton to be selected by the European Space Agency (ESA) for a mission to the ISS and also the first British man in space. His mission launches from Baikonur, Kazakhstan, on December 15 and he is due to return on June 5.

Peake, who is running to raise awareness for The Prince’s Trust, will run the 26.2 miles on a treadmill as the ISS orbits the earth. He will start at 10:00 GMT on April 24, the same time that the more than 37,000 runners will set off from Greenwich to cover the famous marathon distance back in England.

To combat weightlessness, Peake will wear a harness that tethers him to the treadmill as he runs while watching the HD video of the iconic London course on a screen in front of the treadmill. The tension on the harness dictates the speed that he can run.

Peake has been a keen runner since his teenage years and ran the London Marathon on earth in 1999, clocking 3:18:50. He is not expecting to beat that time next year as his medical team at the European Astronaut Centre in Cologne, Germany, will be monitoring his preparations and run carefully to ensure he is at optimum fitness for his return to earth eight weeks later.

“As soon as I got assigned to my mission to the International Space Station, I thought wouldn’t it be great to run the Digital Virgin Money London Marathon from onboard the ISS,” said Peake. “The London Marathon is a worldwide event. Let’s take it out of this world.

“The thing I’m most looking forward to is that I can still interact with everybody down on earth,” he added. “I’ll be running it with the iPad and watching myself running through the streets of London whilst orbiting the earth at 400km above the surface and going 27,000km per hour.

“One of the biggest challenges I’ll be facing is the harness system. In microgravity I would float if I didn’t strap myself down to the treadmill so I have to wear a harness system that’s a bit similar to a rucksack. It has a waistbelt and shoulder straps. That has to provide quite a bit of downforce to get my body onto the treadmill so after about 40 minutes, that gets very uncomfortable. I don’t think I’ll be setting any personal bests. I’ve set myself a goal of anywhere between 3:30 to 4 hours.

Check out this video about Peake’s preparations below:

Hugh Brasher, event director of the Virgin Money London Marathon, said: “Tim’s mission will undoubtedly inspire a generation of children to explore science and space. We hope that this extraordinary marathon run in space will also inspire that generation to run.”

The route was filmed in HD video during the 2013 and 2014 Virgin Money London Marathons and has been converted into an interactive ‘mixed reality’ video, which runners watch as they run on a treadmill. The video playback matches the running speed and runners can also see, and run with, virtual reality avatars of runners from around the world who are also using the download. A special avatar has been created for Peake, showing the astronaut running in his ESA flight suit.

The Digital Virgin Money London Marathon can be purchased from the RunSocial app for £4.99. A link to a free download will be sent to all 247,069 people who applied for a place in the 2016 event.