Brilliant battles on day two of the Anniversary Games 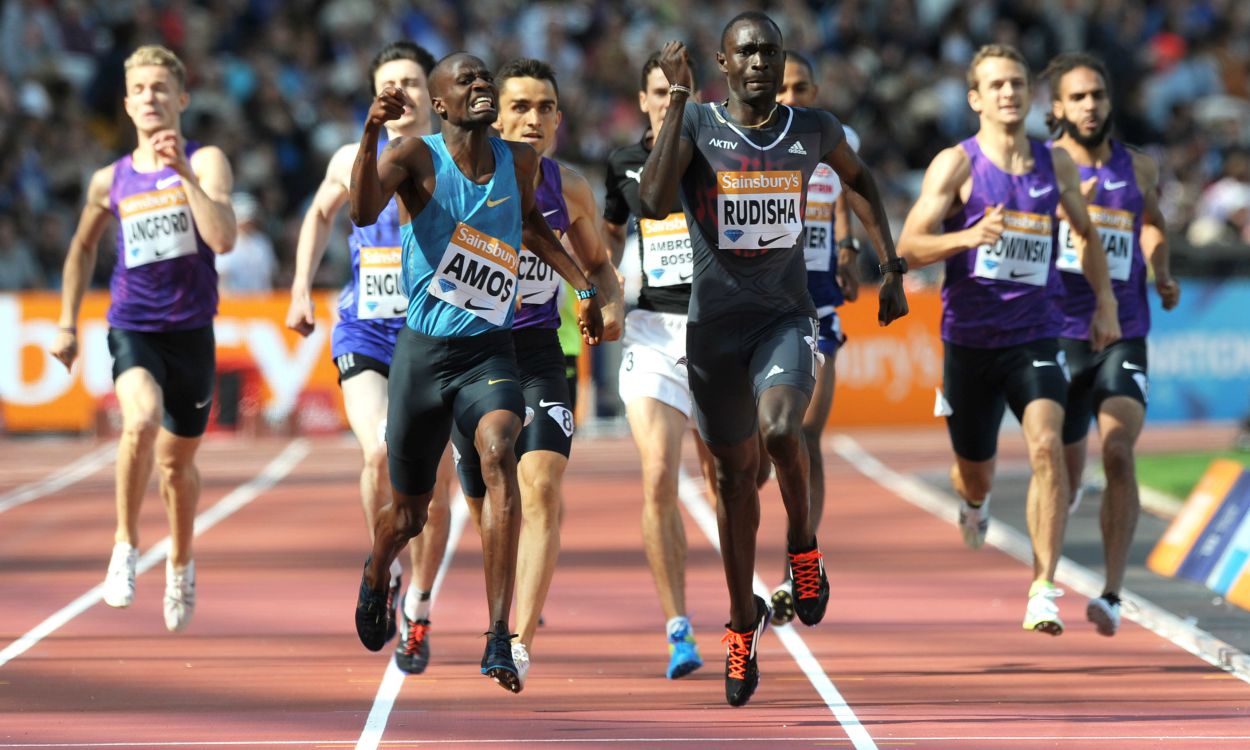 Nijel Amos, Asbel Kiprop and Dafne Schippers are among the winners at London’s Olympic Stadium where Dina Asher-Smith and Shara Proctor both break British records

A national record-breaking run by Dafne Schippers rounded off the second day of Sainsbury’s Anniversary Games action at London’s Olympic Park on Saturday.

Dina Asher-Smith and Shara Proctor had been among the athletes to get the home crowd cheering early on with their British records in the 100m and long jump respectively and some further top performances followed with wins for the likes of Nijel Amos in the 800m, Asbel Kiprop in the mile, Marquis Dendy in the long jump and Elaine Thompson in the 200m.

After matching Asher-Smith’s 10.99 heat time in her own 100m heat, double European sprint champion Schippers continued to prove that her decision to concentrate on the sprints rather than the heptathlon is paying off, clocking a 10.92 Dutch record in the final to beat Nigeria’s double Commonwealth champion Blessing Okagbare with 10.98 and Ivory Coast’s double world silver medallist Murielle Ahoure with 11.01. 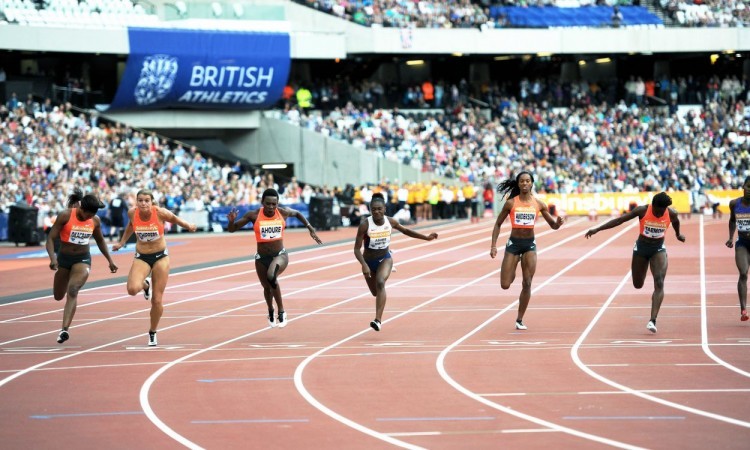 Asher-Smith, who had improved her own British record of 11.02 run in Hengelo in May by going sub-11 seconds in the first heat, ran her third-fastest legal time with 11.06 to finish fourth in the final.

“It has been absolutely amazing,” the 19-year-old said. “I thought I was in good shape but I didn’t realise I was in that good shape.

“I’m in the ten seconds now. I’m absolutely over the moon.”

Earlier on and just a couple of minutes after Asher-Smith’s 10.99, Proctor had joined her fellow Briton in her record-breaking ways. Saving her best long jump leap until last, she added three centimetres to her own national record set in 2012, which she had equalled in Doha in May, with 6.98m.

Proctor had leapt into the lead with 6.67m in the first round and that mark would have been just enough for her to claim victory, but taking to the runway for the final time she improved her winning mark to a record-breaking one to seal the deal.

“This crowd is what helped me the most,” she said. “The claps just echoed and it gave me an extra boost.

“I honestly did not expect to jump so far. I’m just speechless.”

With a devilish 6.66m from the third round, Commonwealth silver medallist Jazmin Sawyers claimed the runner-up spot while Slovakia’s Jana Veldakova prevented a British top-four with her leap of 6.51m. Katarina Johnson-Thompson leapt a best of 6.50m for fourth, one place ahead of Lorraine Ugen with 6.48m, as Jessica Ennis-Hill finished seventh with 6.37m – her biggest leap since London 2012 – and her fellow heptathlete Morgan Lake ninth with 5.95m.

The men’s event was won by USA’s Dendy who leapt 8.38m in the final round to grab victory ahead of South Africa’s Commonwealth silver medallist Zarck Visser with 8.21m. Britain’s Olympic champion Greg Rutherford, who beat Visser to the Commonwealth title last year, fouled his first three attempts but a leap of 8.18m in the fifth round placed him third.

Amos had the edge in the men’s 800m – the Commonwealth champion pushing to the line to beat world record-holder David Rudisha – 1:44.58 to 1:44.67 – to reverse the result from the Olympics on this track three years ago. Rudisha hadn’t employed his usual front-running tactics and instead decided to sit back behind USA’s Boris Berian. As the Kenyan went around Berian on the final bend, Amos went with him and surged past on the home straight to clinch the win. Britain’s Michael Rimmer secured his Worlds selection with his time of 1:45.67 in fifth and two places back was his fellow Briton Kyle Langford – the newly-crowned European junior champion and AW ‘s current cover star – who ran a 1:45.78 PB to go third on the UK junior all-time list, just one hundredth down on a certain Steve Ovett.

Kiprop went from the front to the back and then to the front again to successfully defend his Emsley Carr Mile title. Clocking 3:54.87 ahead of USA’s Matt Centrowitz with 3:55.03 and Ayanleh Souleiman with 3:55.06, he even had enough time to celebrate as he approached the finish, although perhaps a little prematurely as he had to push after a first celebration to ensure he wasn’t pipped on the line. Charlie Grice was the best of the Brits with his 3:55.27 for fourth, as Ross Murray, Chris O’Hare, Tom Lancashire, Jake Wightman and Dale Clutterbuck were also in action. USA’s Bernard Lagat, who had run the 3000m the evening before, finished 13th in 3:57.91. 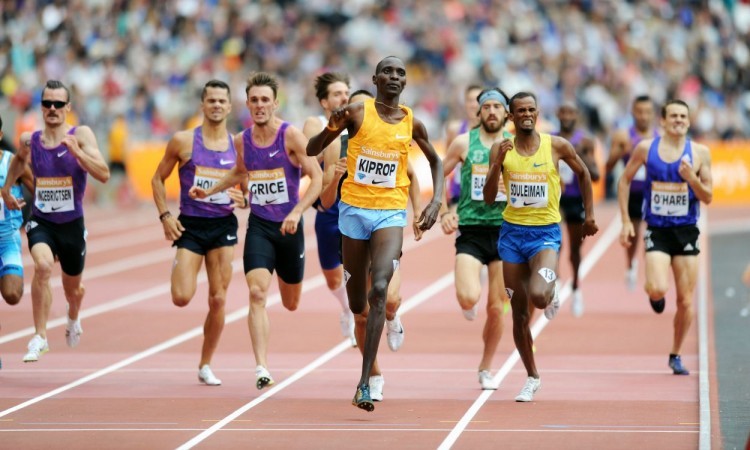 There was a brave run by USA’s Molly Huddle over 5000m as she took an early lead and battled right until the end. She couldn’t hold off the challenge of Commonwealth champion and world silver medallist Mercy Cherono, though, the Kenyan using her finishing strength to chase down her rival and pull away in the home straight – 14:54.81 to 14:57.42. A British trio of Rhona Auckland (15:27.60), Jess Coulson (15:29.50) and Beth Potter (15:36.49) all ran PBs.

Kenya’s world and Commonwealth champion Eunice Sum was another to use her finishing strength to help her to victory in the women’s 800m ahead of 1500m specialist Sifan Hassan – 1:58.44 the winning time. Hassan’s 1:59.46 personal best saw her just pip Britain’s European and Commonwealth silver medallist Lynsey Sharp with 1:59.57 as Shelayna Oskan-Clarke again improved her PB with 2:00.60 after her 2:00.90 run in Lucerne.

Thompson ran a meeting record of 22.10 to take the 200m, the Jamaican followed over the line by Tori Bowie in 22.32 as she led US athletes filling the next five spots. Britain’s Margaret Adeoye ran 22.99 for seventh, one place ahead of Ennis-Hill with 23.49. Bianca Williams finished ninth with 23.59.

Wayde van Niekerk described his season as having been a “blessing” to him so far after the South African secured 400m victory in 44.63. Van Niekerk had broken Isaac Makwala’s African record in Paris with 43.96 only for Makwala to reclaim it the following day in La Chaux-de-Fonds with 43.72 and London posed the opportunity for a head-to-head between the two athletes. On this occasion Makwala finished fourth in 45.29, as Britain’s Rabah Yousif and Martyn Rooney finished sixth and seventh with respective times of 45.43 and 45.73.

The 400m hurdles was won by USA’s Michael Tinsley who clocked 49.02 to beat LJ van Zyl with 49.27. Britain’s Niall Flannery was third in 49.53 as his compatriots Dai Greene and Tom Burton placed fifth and eighth with a 49.85 season’s best and 50.47 respectively.

In a close finish, the GB men’s ‘A’ 4x100m relay quartet of Richard Kilty, Harry Aikines-Aryeetey, James Ellington and Chijindu Ujah combined to clock 38.32 to France’s 38.34, with Jimmy Vicaut running the anchor leg for the runners-up. The ‘B’ GB team initially placed third but was later disqualified.

The male pole vaulters enjoyed much more favourable conditions to those they were initially due to compete in on Friday evening. Renaud Lavillenie and Shawn Barber were two athletes to make the most of the delayed start because of Friday’s wet weather. World record-holder Lavillenie had cleared 5.97m to win the Olympic title in London three years ago and he continued his winning ways in the Olympic Stadium, soaring over the bar at 6.03m for a stadium and meeting record. He went on to attempt 6.10m but failed his three goes. Canada’s Barber was another to impress as he again improved his own national record to 5.93m before attempting 6.03m. Britain’s Jax Thoirs finished seventh, clearing 5.30m on his first attempt but not managing to make it over 5.50m.

“I’m very happy to be able to jump today instead of yesterday, today was perfect conditions for us,” said Lavillenie. “Now I have to stay focused and go back and train for Beijing.”

The women’s event was won by Nikoleta Kiriakopoulou of Greece who enjoyed first-time clearances up to her winning height of 4.79m to win a battle over the bar with Russia’s Anzhelika Sidorova on countback. Contesting only her second javelin competition this season, Goldie Sayers threw 62.09m for sixth in an event won by Latvia’s Madara Palameika with 65.01m.

Michelle Carter won the shot put as she threw a best of 19.74m in the first round to beat two-time Olympic and four-time world champion Valerie Adams, who continues her return after surgery. Adams managed 18.59m in the second round, that throw followed by a final four fouls. Britain’s Rachel Wallader finished eighth with 17.08m.