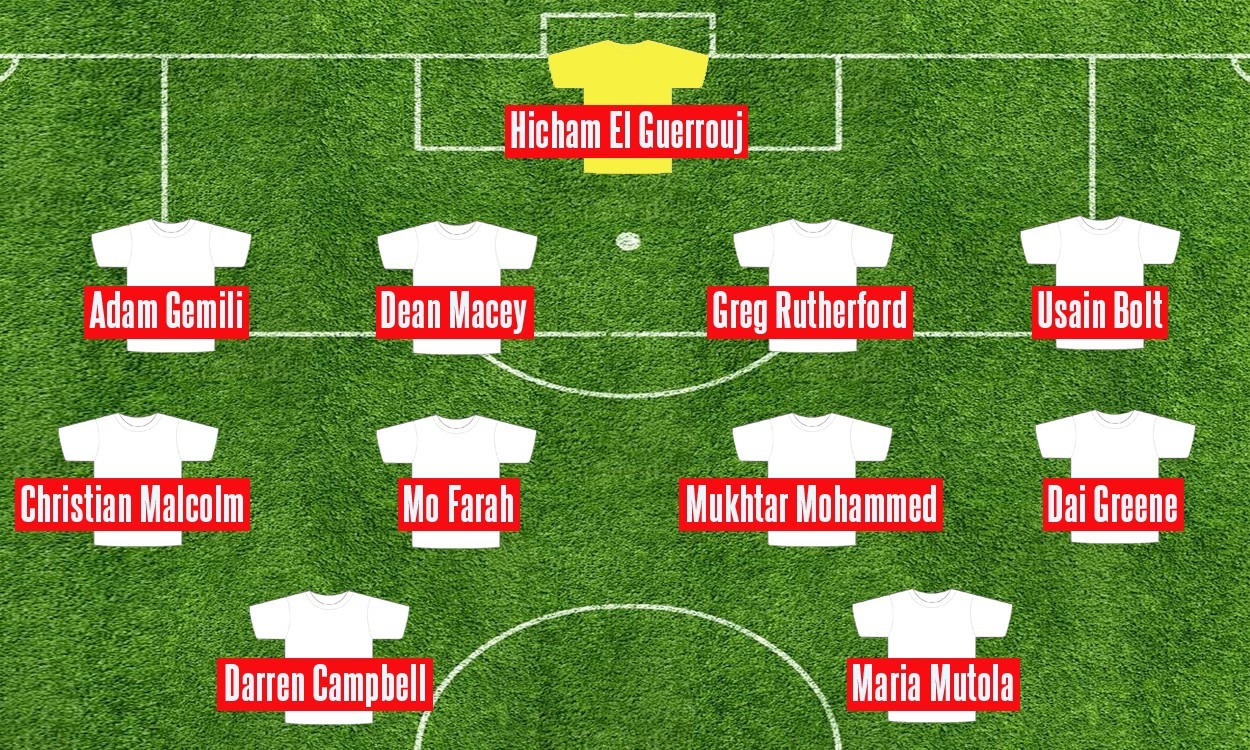 If Athletics Weekly could field a dream team at the FIFA World Cup, Usain Bolt, Mo Farah and Adam Gemili would make our starting XI. But would they stand a chance against Neymar, Messi and Ronaldo?

The world of athletics is full of former footballers who ditched soccer studs for track and field spikes. Going for gold in the Olympics was more appealing than kicking a ball in a game that relies on 10 team-mates also playing well. But we reckon the following team of ‘athlete footballers’ could still give most teams a run for its money.

In keeping with the nature of Athletics Weekly – a magazine that covers world athletics but with a big British bias – our dream team largely consists of British players. Even so, there are a couple of players from the rest of the world and, with competition for places intense, AW readers are encouraged to get vocal and share their views on who they think should be in – or out – of our starting XI.

In goal we have Hicham El Guerrouj. The world record-holder for 1500m and the mile is now retired and aged 39, but he was a goalkeeper during his youth before he took up running. 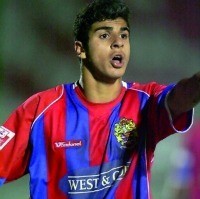 Adam Gemili, the 19.98 200m runner, is one of our star players at right back. He played in that position for Thurrock – one of several clubs he played for before switching to sprinting. The 20-year-old was also on Chelsea’s books for a while.

Dean Macey and Greg Rutherford are tall, strong, old-fashioned English-style centre halfs in our team. Macey had trials with Arsenal before he took up decathlon, eventually winning the Commonwealth title in 2006, whereas Rutherford had trials with Aston Villa as a teenager and talent obviously runs in the Olympic long jump champion’s veins as his great grand-father, Jock Rutherford, played for Newcastle United and Arsenal and won League Championship and FA Cup medals.

At left back, we have Usain Bolt. How could we leave him out the team? But why left back? Well, the sprint legend has said before in interviews that he actually prefers playing full-back as opposed to the striker or winger positions that most people assume he suits. AW also studied videos of him at charity kick-abouts and noticed he boots the ball with his left peg.

In midfield we have Christian Malcolm, Mo Farah, Mukhtar Mohammed and Dai Greene.

Malcolm, the former world junior 100m and 200m champion, played for a Notts Forest youth side as a child. He’s a little out of form this season and was over-looked for Commonwealth selection but we reckon he is still fast enough to skin most full-backs. 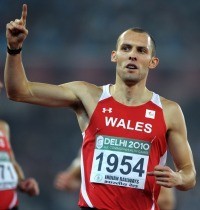 On the left wing is another Welshman – the 2011 world 400m hurdles champion Greene. Playing for Swansea, he famously once scored a penalty against Real Madrid in Spain – and he was so keen to be “the next Ryan Giggs” during his youth that he taught himself to kick with his left foot.

Up front Darren Campbell spearheads the attack. The most experienced player in our dream team, the former European 100m champion took time out during his sprint career to play for a number of professional sides such as Cwmbran, Plymouth Argyle and Weymouth FC. Now aged 40, he has given speed training advice to some of the Premiership’s top teams. 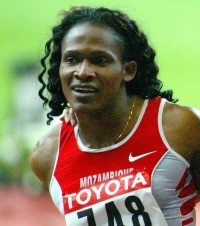 Joining him in attack is Maria Mutola. Arguably the greatest female 800m runner in history, she went on to play in the South African women’s league and in 2011 captained the Mozambique football team at the All-African Games.

Boldon was a talented player in his youth, as was Turner, who had Notts County and England trials as a teenager. Maclarty, meanwhile, played for Scotland’s under-19 women’s team before focusing on middle-distance running, while Thompson played for Mansfield Town and Stevenage after hanging up his spikes. As for David Oliver, we have no idea if he’s any good, but he’s a huge football fan and certainly looks like he can play!

Managing the team is Lamine Diack, the president of the IAAF and, in a former life, technical director of the Senegal national football team. Ade Mafe, an Olympic 200m finalist in 1984 who went on to become one of Chelsea FC’s main fitness coaches, is Diack’s assistant coach.

AW’s team might be found a little wanting in the tackling or skill departments, but surely no opponents could match its speed and stamina. With Gemili, Bolt, Malcolm and Greene rampaging up the flanks, there is unrivalled pace, while surely no one has a better “engine” than Farah in midfield.

» Let us know what you think of our World Cup dream team by tweeting us @AthleticsWeekly, sending us a comment on Facebook, getting vocal on our forum or by leaving a message under this post. Jason Henderson is the editor of AW