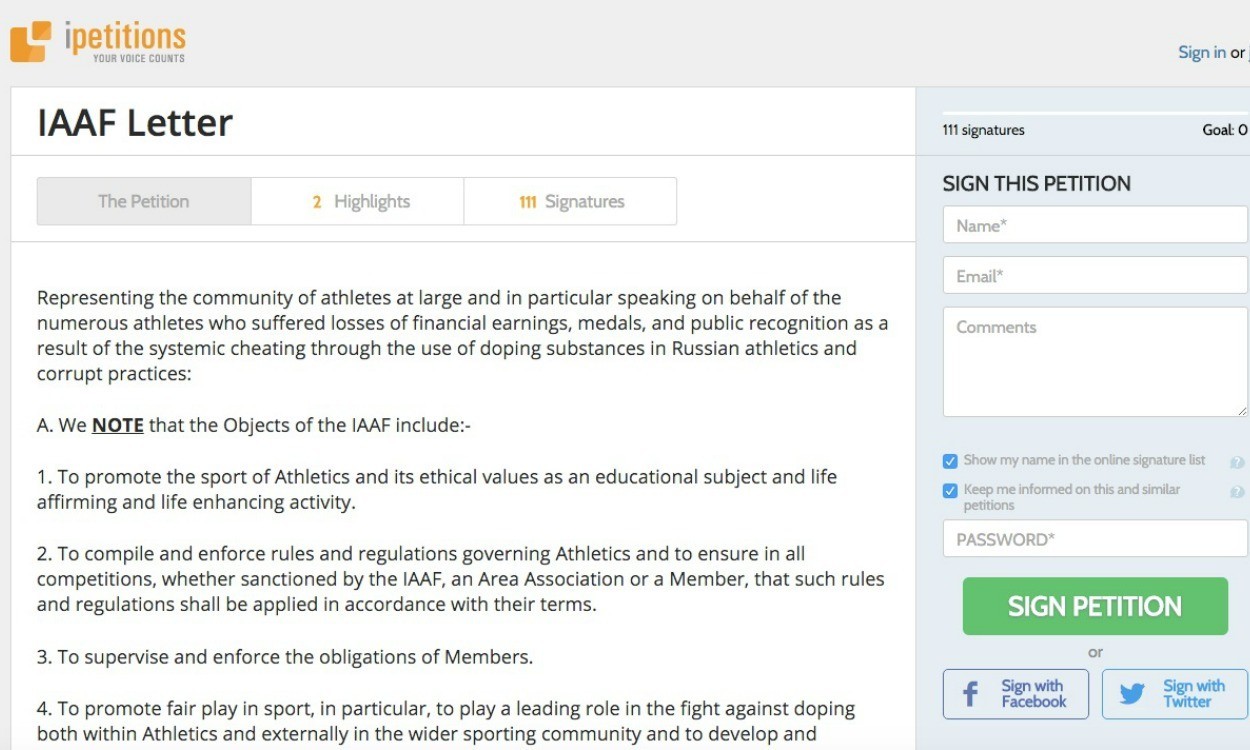 More than 180 names have been added to a petition urging the International Association of Athletics Federations (IAAF) to require that before the All-Russia Athletic Federation (ARAF) is reinstated as an IAAF Member, the ARAF must repay prize money and appearance fees received by Russian athletes whose results have subsequently been nullified for doping offences since 2009.

The ARAF has been suspended as an IAAF Member, with athletes unable to compete in international competitions, since last November. The decision to suspend Russia was made at an IAAF Council meeting which followed the publication of a World Anti-Doping Agency (WADA) Independent Commission report detailing findings including a “deeply rooted culture of cheating” in Russian athletics.

The petition, which features the names of some current and former athletes including Paula Radcliffe, comes ahead of an IAAF Council meeting taking place on March 10-11 at which an IAAF taskforce is due to give an update. The taskforce was created to verify the reforms programme in Russia to enable the ARAF to gain re-acceptance for IAAF membership.

“Representing the community of athletes at large and in particular speaking on behalf of the numerous athletes who suffered losses of financial earnings, medals, and public recognition as a result of the systemic cheating through the use of doping substances in Russian athletics and corrupt practices,” reads the petition in part.

As well as urging the IAAF to require repayment of prize money and appearance fees, the petition also asks the sport’s world governing body to distribute that prize money to any affected athletes – “i.e. those athletes who rightfully should have earned prize money or higher prize money for their results in events in which they finished behind said Russian athletes”.

The petition adds: “We PROTEST in the strongest terms any reinstatements of any banned athletes (including so-called “whistle-blowers”) without the full repayment of their unfairly gained prize moneys. Our concern on this issue is quite straightforward: The earnings that such athletes have been allowed or might be allowed to keep are not financial assets that are the property of WADA or the IAAF to negotiate away. This money rightfully belongs to those athletes whose earnings were reduced by cheating athletes who finished ahead of them in various events. WADA and the IAAF have no right to use such earnings as a bargaining tool without fully consulting those athletes who have been negatively affected.”

Marathon world record-holder Radcliffe, who is a zealous anti-doping campaigner, wrote on social media website Twitter: “Athletes: I back the idea that at the very least all stolen prize money should be repaid before those banned can return to our sport.”

Athletes: I back the idea that at the very least all stolen prize money should be repaid before those banned can return to our sport.

On Sunday, further allegations about Russian athletics were made in a third ARD/WDR documentary about doping in the sport.

Allegations in the documentary – entitled ‘Russia’s Red Herrings’ – include that a provisionally suspended coach had continued to work with elite athletes and that prior notice of doping tests had been given by a member of the Russian Anti-Doping Agency.

Following the documentary’s broadcast, the IAAF said its taskforce “will look carefully into the matters raised”.

WADA said it was “dismayed” by the latest allegations.

» This post was updated at 17:30 GMT to reflect the number of names added to the petition