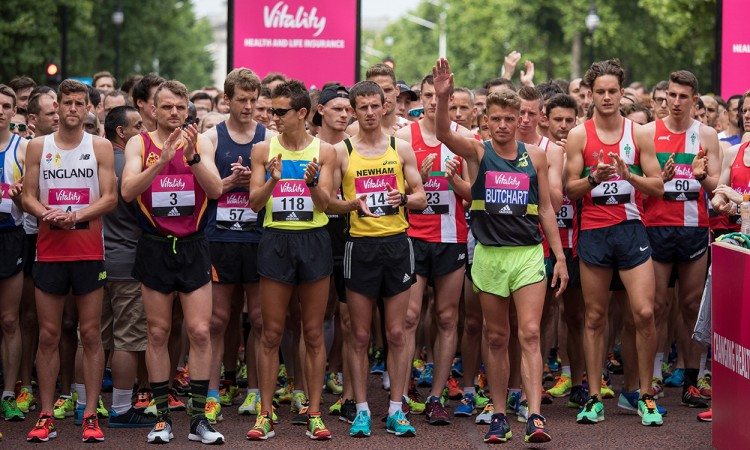 The Scot returned to racing over the weekend after breaking a bone in his foot in February. Earlier this year he told AW about the lessons he’s learned from injury

I would never recommend getting injured to anyone but I’ve found that having some enforced time out has given me the opportunity to learn a great deal and acted as a reminder about how lucky I am.

Since breaking the navicular bone in my foot during a race in New York back in February, I’ve come to realise that so much of the recovery process is mental.

When it comes to injuries, you need to stay really positive and set little goals every day. Even if it’s something as simple as going from 20 press-ups to 25 press-ups, give yourself a pat on the back because that’s an improvement.

Positivity and waking up the mind to help me heal was absolutely massive for me. If you’re an unhappy athlete then you’re going to have an unhappy body.

It’s good to be back running again but the whole injury/rehab process has not been that bad. It was actually nice to have a little break from putting all of those miles in and to do something different.

I’ve enjoyed cross training and getting outside on the bike and I’ve been enjoying swimming, too, so if I find I’m not able to run fast again then I’ll just do triathlon instead!

Recovering from injury really has been an education. I would say that, before I had my injury, I didn’t really know my body that well, so I didn’t really have a connection with body parts because I wasn’t taught about it all, if that makes sense.

But now I understand my body a lot more, which I find very interesting.

“Positivity and waking up the mind to help me heal was absolutely massive for me. If you’re an unhappy athlete then you’re going to have an unhappy body”

I think the protocol for people who are injured is that they get upset and get into the whole ‘why me?’ thing but, as I say, I found it a really good time to learn. Obviously I don’t want to get injured again and I don’t want anyone to get injured but it’s part of the sport and, after all, you do need to be pushing your limit.

I just enjoyed following the process with getting back into running again. I’m also aware that I’ve been in a very, very lucky position with the support that I’ve had.

I was able to go into Bisham Abbey for six weeks, which is like a rehab school. You’re in there from 9-5 every day, with an hour’s break for lunch, and you’re seeing physios, strength therapists and other support staff. People are waiting on you hand and foot.

They were so, so good. One of the things with hurting your foot is that you’ll lose a lot of muscle mass from that leg but I didn’t lose much at all because we stayed in top of it really, really well.

I feel so sorry for the people who aren’t in my position – the everyday runners that may break a bone or get hurt. There are people who don’t have any support whatsoever and I know that if some of them broke their navicular like I did then it might be the last thing they ever do running-wise.

The way I have recovered has been really specific. I’ve trained in a very specific way and I’m very fortunate that I’ve been able to do that.

Once I got back to America from Bisham Abbey my coach, Terrence Mahon, began battering me with drills, working on my form, working on foot strength and other things to make sure that every other part of my body is ready to go back to running.

We were trying to work out why my navicular went and to make sure we wouldn’t fall victim to that again. I needed to strengthen other parts of the body so that that foot doesn’t have to go through as much stress as it was going through.

With my running stride, my foot strike was a little awkward on that indoor track in New York, but everyone I’ve spoken to had a different idea about what went wrong so we can’t pinpoint anything specific.

But there are things we can work on, such as using bigger muscles to save the little muscles from working so hard, and that should make me a better athlete.

» See the June 7 edition of AW, which is available digitally here, for the original full feature