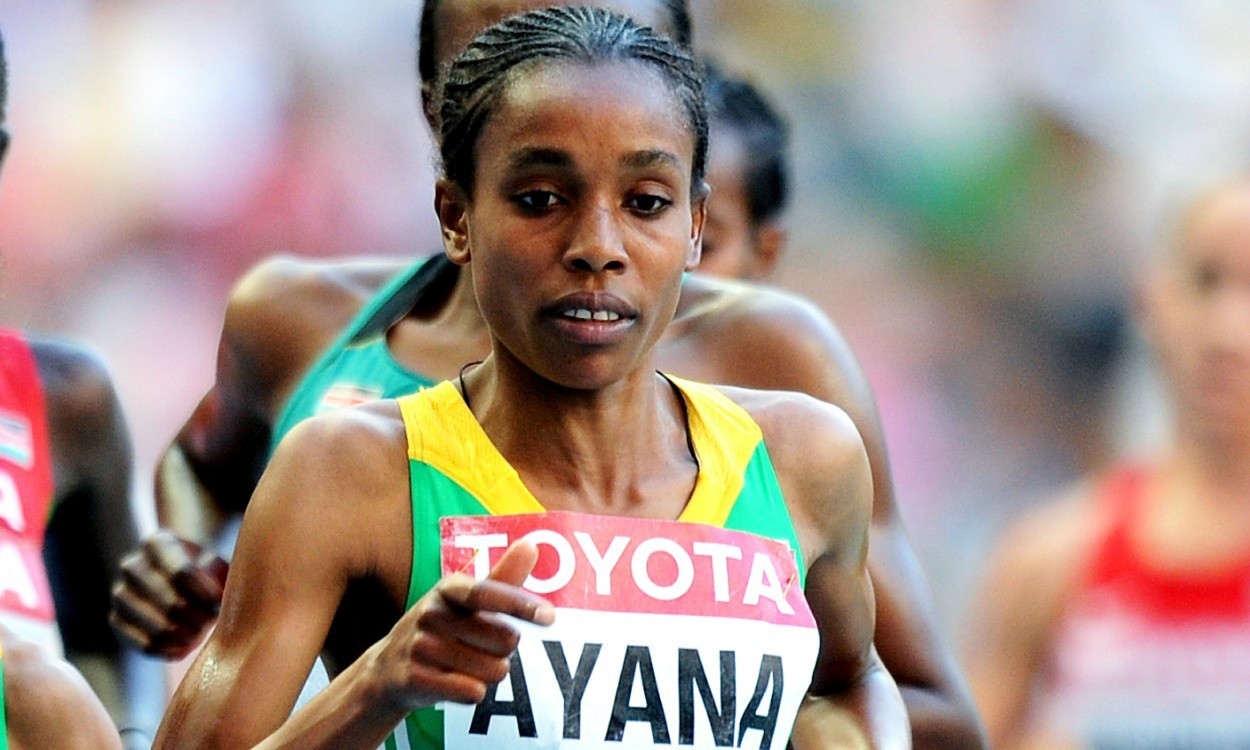 Almaz Ayana ensured that the Meeting International Mohammed VI ended on a high on Sunday (May 22) as she clocked the fifth-quickest ever 5000m at the Diamond League meeting in Rabat.

The world champion won by more than 13 seconds, running 14:16.31 for a time that has only ever been bettered by herself once, world record-holder Tirunesh Dibaba and their fellow Ethiopians Genzebe Dibaba and Meseret Defar.

Ayana is now just the third runner after Genzebe Dibaba and Defar to have run sub-14:20 for the distance more than once. Her Rabat performance comes after she won the 3000m at the Doha Diamond League meeting in a world-leading 8:23.11.

Behind Ayana, who ran her PB of 14:14.32 that puts her third on the world all-time list in May last year, Kenya’s world fourth-placer Viola Kibiwot ran a 14:29.50 PB, while Ethiopia’s world silver medallist Senbere Teferi clocked a 14:35.09 PB.

“I feel disappointed because I wanted to break the world record,” said Ayana, who added that the wind had been too strong. “I am sure that I can break the record in one of my next races this year. In the Olympics, I am aiming to compete in both the 5000m and 10,000m.”

Over in the women’s 800m and the top six all broke 2:00, led by South Africa’s 2009 world champion Caster Semenya with a world-leading and meeting record time of 1:56.64 ahead of world indoor champion Francine Niyonsaba’s 1:57.74. Also among those sub-2:00 performers was Britain’s European and Commonwealth medallist Lynsey Sharp, who clocked 1:59.51 for a Rio qualifying time and fifth place in her first 800m of the season.

Kenya’s world silver medallist Conseslus Kipruto ran an African all-comers record with his world-leading time of 8:02.77 in the 3000m steeplechase, despite waving to the crowd on his way to the line. Behind him, Commonwealth silver medallist Jairus Birech ran 8:03.90.

Jamaica’s world 200m silver medallist Elaine Thompson won the 100m in 11.02 to break the six-year-old meeting record and beat Nigeria’s double Commonwealth sprint champion Blessing Okagbare with 11.11 as USA’s Carmelita Jeter placed fifth with 11.32. Further meeting records were run in the 110m hurdles, as David Oliver clocked 13.12 to Orlando Ortega’s 13.13, and in the 200m, where Alonso Edward clocked 20.07 to beat Wilfried Koffi with 20.35.

There was also a meeting record in the women’s javelin as Madara Palameika threw 64.76m in the third round to beat Liina Laasma of Estonia with a national record-breaking throw of 63.65 from the fifth round. In the pole vault, Ekaterini Stefanidi got the win with a meeting record clearance of 4.75m ahead of Nicole Büchler with 4.70m and Yarisley Silva with 4.50m.

Two-time Olympic gold medallist Valerie Adams was just a single centimetre off her own shot put meeting record from 2014 as she threw 19.68m in the fifth round for victory. World champion Caterine Ibarguen continued her dominance of the women’s triple jump to win with 14.51m.

The men’s high jump was won by Ukraine’s 2013 world champion Bohdan Bondarenko thanks to his clearance of 2.31m, while Britain’s Olympic medallist Robbie Grabarz cleared 2.25m and finished fifth.