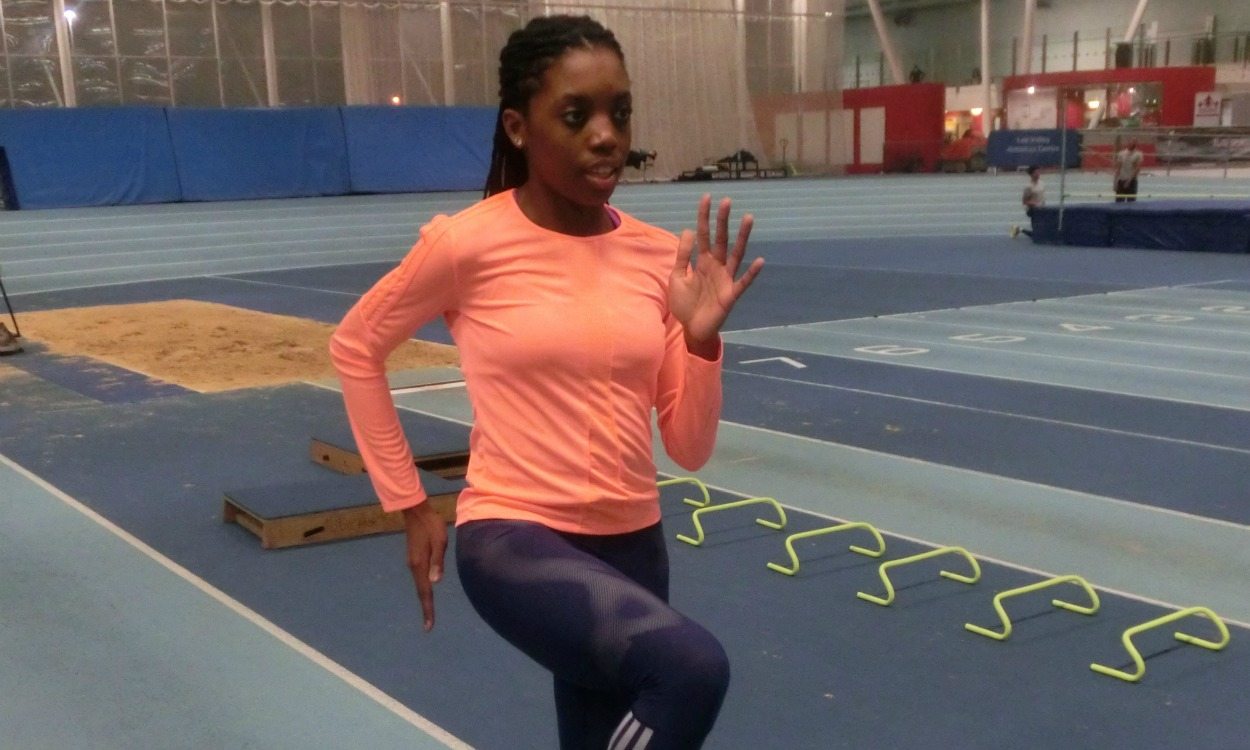 With two former GB international sprinters as parents, Alicia Regis has amazing speed in her genes. And after blasting to No.7 on the UK under-15 all-time indoor 200m rankings with 24.99 earlier this year, the 14-year-old is quickly making a name for herself.

Alicia’s father, John Regis, was the first Briton to break the 20-second barrier for 200m and still holds the UK record for the event courtesy of his 19.94 clocking in 1993. During an incredible career he also won world individual silver and bronze in 1993 and 1987, world indoor and European golds in 1990, as well as world 4x400m gold in the 1991 World Championships – where he famously teamed up with Roger Black, Derek Redmond and Kriss Akabusi to beat the United States – plus a silver and bronze in the relay from the 1992 and 1988 Olympics respectively.

With such bemedalled athletes as parents, Alicia could feel a weight of expectation on her young shoulders, but instead she feels inspired and would like one day to emulate their achievements on the global stage.

“I want to be one of the fastest British women in the world and receive a gold medal in an Olympics,” says Alicia. “This year, I just hope to improve my PBs over 100m and 200m and, most importantly, stay fit.”

The Enfield & Haringey teenager is going about her aim the right way, having already in 2016 won the Southern indoor 200m title and gone sub-25 for the first time when winning the London Games. However, Alicia’s first taste of national success came last year when she claimed England Athletics silver over 200m.

Reflecting on this important milestone, she says: “When I won my first national medal, I was over the moon, as I never believed I would do that in my first year as an under-15.

“After this race, my confidence grew, as I knew that if I put my mind to something I will eventually be able to achieve it.”

However, even the youngster herself has been surprised by how fast she has run already in 2016.

“My improvement this year was quite a shock to me, as my aim was to get under 25secs, but I never realised it would happen so quickly,” she says.

“I don’t really know how fast I will be able to go as I don’t want to get my hopes up, thinking that every time I race I should go for a PB. I run because it is something that I love doing,” she adds modestly.

Initially coached by Stan Madiri, Alicia established a solid technique by doing a lot of drills before races. Now coached by John Denford at Lee Valley, she still only trains three times a week and participates in a variety of sports for Francis Holland School.

Her favourite training sessions involve fast 200s or longer, signalling that perhaps, like her parents, she too might end up running some one-lap races.

When asked about her favourite athletes, Alicia mentions Usain Bolt, Allyson Felix and Dina Asher-Smith as sources of inspiration. But has she ever seen footage of her parents racing? “When I was younger I would often ask my parents about what they did before I was born and they would explain their athletics careers and show some old videos,” she explains.

“They also run a sports management company – Stellar Athletics – and I was often taken to track meets with my sister.”

However, when it comes to coaching Alicia, her parents leave it to Denford. “When it comes to training, my parents don’t really get too involved, as they just want to be my parents,” she says. “They do give me advice on eating healthily and stretching, though.”

Stoute simply reiterates the words of her daughter, crediting the role of Denford and keen not to put any additional pressure on the talented teenager.

“Both John and I are extremely pleased with how athletics has shaped Alicia’s confidence,” says Stoute. “We are very lucky to have found a coach who has taken his time to turn around a very shy girl into a talented young sprinter.

“Alicia does not feel any pressure from our past performances, as she is very driven with her own personal goal settings. We just want her to enjoy herself at this stage.”

Enjoyment is the key for any teenage athlete but there is also the fierce desire to succeed and when it comes to winning sprint races, Alicia has enjoyed a flying start to her career.

You can find further performance stats on Alicia on Power of 10 here.