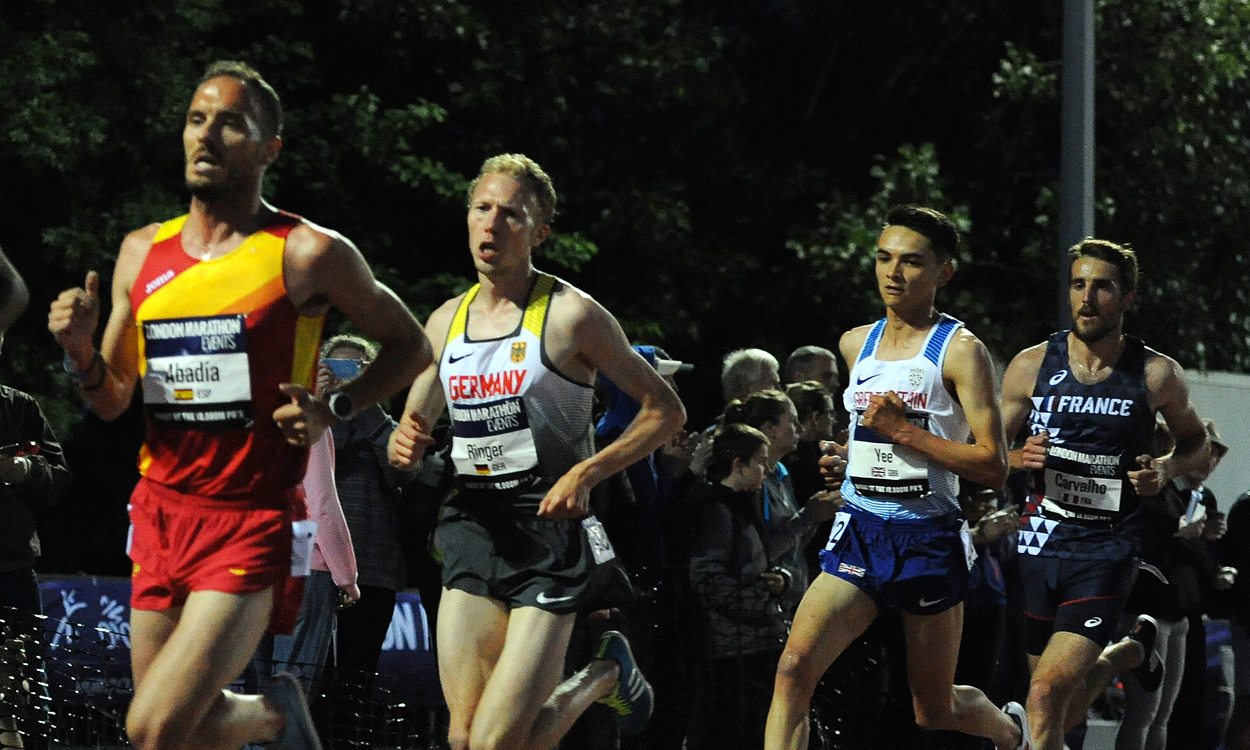 On a day dominated by the royal wedding in Windsor, the new king of domestic 10,000m running was crowned in Highgate when Alex Yee beat the ultra-experienced Andy Vernon and Chris Thompson to take the national title at the Night of the 10,000m PBs.

Yee only turned 20 in February and remarkably focuses more on triathlon than running. But on Saturday night in north London he finished fifth overall – and first Briton – in his 10,000m debut in a European Cup race won by Richard Ringer of Germany.

Yee’s time of 27:51.94 was less than five seconds outside the British under-23 record of 27:47.0 set in 1971 by Dave Bedford, who was among the packed throngs of spectators on Saturday night in addition to IAAF president Sebastian Coe, European Athletics president Svein Arne Hansen and former world snooker champion and keen runner Ronnie O’Sullivan – to name just three.

“I’m pretty made up,” Yee told AW. “I came in not really knowing what I could achieve and I got the best result possible.”

Yee was a mere pacemaker at the 2017 event which was won by Vernon and he added: “I’m so lucky to have been given the opportunity this year to compete. I got the bug for Highgate last year and it’s so much fun to be around everyone cheering and to be part of it.”

.@Lixsanyee “elated” with his performance at @NightOf10kPBs – fifth place on his 10,000m debut in 27:51.94, also securing his Euro Champs place. Thanks those who helped and supported him during his return after a serious bike crash. He was a pacer at 2017 Highgate event. pic.twitter.com/HaJFSic6oD

Yee was content to settle in during the early stages of the race before moving into pole position in the British Championships battle in the closing laps.

Going into the final 400m both Vernon and Thompson chased hard to catch him but fell just short in a frantic and near-blanket finish. “I was just trying to run the best race I could and was unaware of everyone behind me,” said Yee, who must now decide if he wants to race at the European Athletics Championships in Berlin in August. “I’ll have to look at that as I haven’t really thought about it much as I just wanted to run a good time tonight,” he said.

Twelve months ago Yee ran a sparkling 13:37.60 for 5000m – the fastest time by a British junior for 36 years – but he suffered serious injuries soon afterwards in a triathlon bike crash before returning this year to win the British Universities cross-country title and to run a fast split at the national road relays last month.

The recent winter has seen him step up his running mileage from 40-odd miles per week up to 70-plus under the guidance of coach Ken Pike, but he combines this with about 12 hours of cycling per week plus swimming too. “It’s just been eating, sleeping and training in the last six months!” he says.

Yee is part of the Lottery funded programme for British Triathlon and trains in Leeds with triathletes such as Beth Potter, who won the women’s A race at the Night of the 10,000m PBs in 2017. “She gave me some pointers before racing here,” revealed Yee.

“The triathletes are the hardest workers out of any sport and my training partners and housemates all invest 30-35 hours per week in training and don’t get the credit they deserve,” he added. “So it’s nice to come here and show what we can do.”

» See the May 24 issue of AW magazine for more