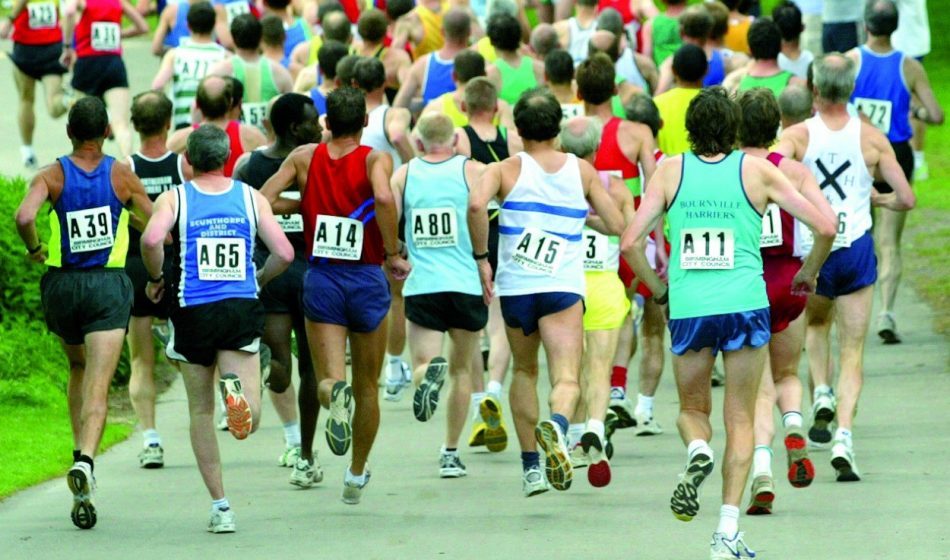 Achilles injuries are rife among runners. In an extract from his book, physiotherapist Paul Hobrough explains how best to look after the tendons

The Achilles – the tendon that attaches the gastrocnemius and soleus muscles (known together as the calf muscles) to the calcaneus (heel bone) – is such a common area for runners to injure that only the knee can knock it off the top of the injury leader board.

Pain is noticed more as Achilles stiffness initially, first thing in the morning. It’s only when the pain starts to influence their running do they present to clinic in search of some answers.

Why the Achilles is such a common site for injury is largely unknown despite several internet articles suggesting that it’s down to poorly fitting shoes, bad running technique or, my personal bugbear, overpronation. The fact is that we just don’t know what the main cause is.

What we do know is that the tendon itself breaks down. When it becomes injured it affects the collagen fibres that make up the tendon and this causes stiffness and pain. The fibres have a short-lived period of inflammation and then what’s left is a sort of inflammatory soup that causes disruption to the fibres, which creates the common bump seen on the distal third of the tendon.

During the acute phase (although these injuries are chronic in nature there has to be a start point of injury which we refer to as acute or onset of injury), the additional fluid within the structure creates an opportunity for blood vessels to work their way into the tendon from the fat pad just anterior to the Achilles.

Early-stage management of an Achilles tendon injury is the key to success. In patients who present on first signs of soreness, it is highly likely that just the outer layer, known as the paratendon, will be inflamed. The paratendon can become inflamed and irritated, causing similar symptoms to a full-blown Achilles tendinopathy.

The methods used to treat an Achilles have changed more times since I became a physiotherapist than the approach to any other injury. Research is always evolving in this area and there are a greater number of research papers currently, largely owing to the increased numbers of those suffering.

Progression of the injury

Research indicates that the injury is caused by the Achilles breaking down, that the collagen fibres start to spread and ground substance (water-based, gel-like substance found in connective tissue) infiltrates the spaces between them.

With this expansion of the fibres comes an increase in Achilles size, usually in the distal third of the tendon, just above the heel. The tendon is usually 0.6cm from back to front and a thickened Achilles will increase towards a full centimetre. This can be measured using either ultrasound scan (USS) or magnetic resonance imaging (MRI). My preference is a USS as you can scan in real time, scan through movement and switch to dopla mode to look for blood vessel involvement.

1. Try first squeezing the tendon along its length to see if you identify a clearly defined most painful spot. Take hold of the Achilles tendon with both fingertips and gently distort the tendon, lifting with one hand and pulling with the other so it bends side to side. If this elicits pain, then, given nothing else is being manipulated, it’s likely the issue does lie with the tendon itself.

2. Try a stretch to the tendon (a calf stretch off a step) and if this also gives pain, you are likely to have an Achilles problem.

A physiotherapist will use soft-tissue massage on the calf muscles and into the foot, ankle joint mobilisations and foot mobilisations. You may well be prescribed in-shoe orthotic inserts if the biomechanics of the foot and ankle are perceived to be at fault. Eccentric or appropriate loading as outlined on the next page are the key route to being free from this common running ailment.

If all conventional treatment options fail, for those resistant tendons that just don’t respond to the normal physiotherapy, there is shockwave therapy (SWT), a series of shocks derived from lithotripsy, which in layman’s terms is breaking up of hard substances.

Cells responsible for soft tissue and bone regeneration and healing are known as fibroblasts and osteoblasts. SWT has been shown to stimulate these cells and therefore promote healing.

Finally SWT has a pain-reducing element to it, working on the brain’s transmission of pain, first of all as a transient, short-lived pain reduction. However, it is also being shown to work on the ‘pain-gate’, acting as a reset button for the perception of pain and therefore having potential long-term effects on pain reduction.

Recent scientific study into SWT revealed 75% of patients reporting their Achilles pain-free at their six-month follow-up and a further 14% with greater than 50% reduction in pain.

Another option is high-volume injection, known as a bolus, whereby saline is injected between the tendon fibres and the fat pad that sits anterior to it, thus separating the two (similar to a surgical intervention).

If you don’t get better, a new polypill under a GP’s guidance could help. Recent research in sports science has suggested that putting three medications together has a beneficial effect on chronic tendon issues. Doxycycline (a penicillin available on prescription), taken 100mg per day alongside 400mg of ibuprofen four times per day and as much green tea as you like make up the polypill.

You are unable to self-administer this as you need a prescription from your GP for the Doxycycline, and just taking ibuprofen and green tea does not have the same effect at all, but may cause some stomach issues.

Finally, while I am not an advocate, surgery could be an option. Instead of looking to perform surgery on the Achilles itself, some orthopaedic surgeons favour cutting (resecting) the small muscle that sits alongside the Achilles ‘plantaris’ – although not everyone has one to start with – as chronic Achilles pain can be attributed to an issue with the plantaris, and not the Achilles tendon itself.

By having the plantaris surgically resected, some individuals have found their pain has subsequently gone.

The treatment centres around three key types of muscle contractions:

The key here is to understand how to do these contractions in the correct way at the correct time. Initially you may well be just matching resistance, contracting the muscle without movement known as isometric contraction. Then you can move on to eccentric exercises, whereby there is no load on the upward movement but resistance against the lowering back to the neural position. Finally, concentric movements are included whereby the muscle is being used in both the upward and lowering movements through range.

It is easier to explain these movement patterns in relation to the biceps muscles and the patient can then take this model on to the more complex ankle exercises.

It is universally accepted that eccentric loading of the Achilles tendon through the heel raise is optimal for healing. However, the patient may be in too much pain or lack the strength to achieve an eccentric contraction.

Heel raises, as in pushing up on to your toes, can be done in several different ways. The heel raise can be done from the flat surface up on to tiptoes, or lowering off a step, enabling a greater degree of movement into dorsiflexion. This can be done single-leg and double-leg, as well as with the feet positioned for internal or external rotation. Such is the variety, it’s difficult to give just one method of exercising all Achilles injuries, but the norm is shown below. 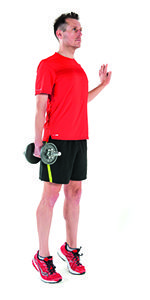 Hold this pose for approximately 45 seconds at a time and repeat four times. Move to single-leg isometric holds after a few days.

Perform concentric calf raises from the floor (moving on to tiptoes before lowering yourself down).

Move to double leg then single leg as you are able to progress. Do 3×15 reps per day for three weeks.

Eccentric loading is where you stress the muscle only on the return against gravity or resistance. Therefore, you need to do as little work as possible to get into the start position on tiptoes, then work in a slow motion down to the end of your available ankle range (which has to be done single leg), 3×15 reps with weight on alternate days.

Lower slowly, taking six seconds from tiptoes to end range, then raise up either with support or using the good leg back to the starting point.

» Paul Hobrough is a chartered physiotherapist at physioandtherapyuk.co.uk. For eight years, he competed in the GB flatwater kayak team and is now lead physiotherapist for Lucozade Sport and Sweatshop UK and counts Steve Cram among his clients. Running Free of Injuries: From Pain to Personal Best by Paul Hobrough is published by Bloomsbury books (RRP £18.99. Ebook £12.99)