Abigail Irozuru bounces back and secures a spot for Prague 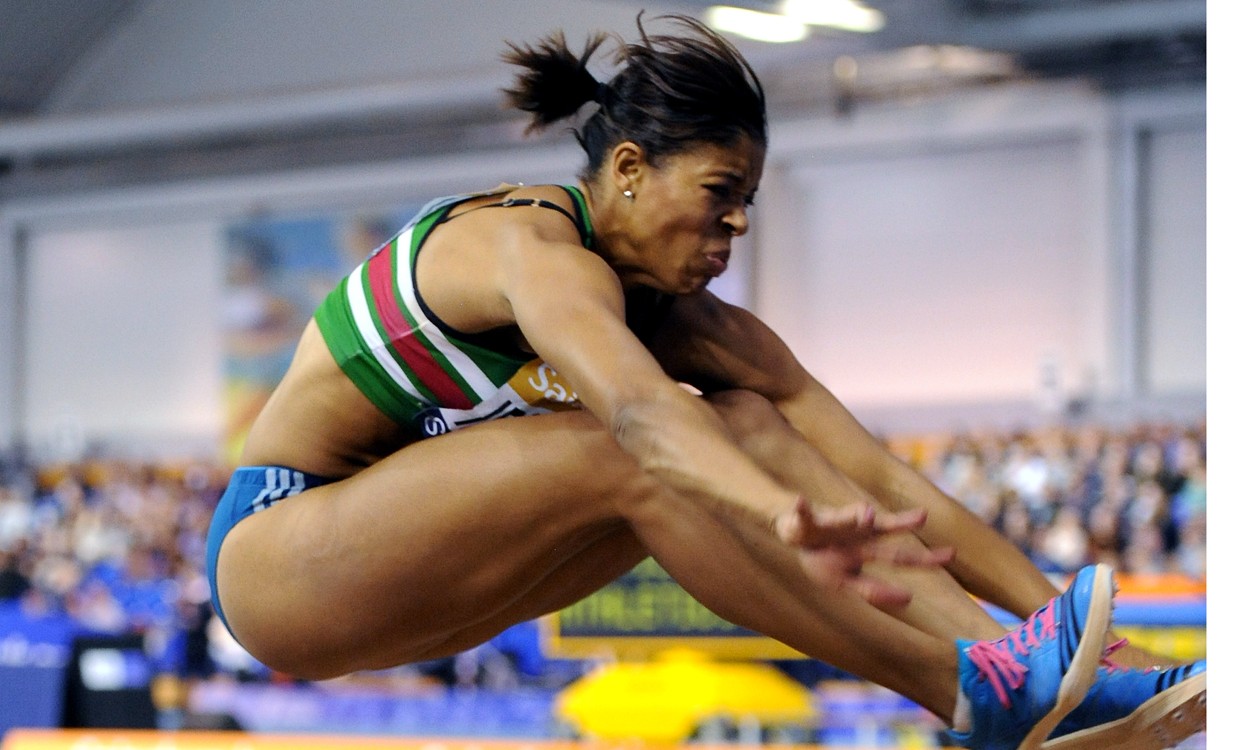 A thrilling finish to the women’s 3000m brought the Sainsbury’s Indoor British Championships in Sheffield to a close on a day that also saw an impressive indoor long jump PB for Abigail Irozuru, a fifth British indoor 400m title for Nigel Levine and a seventh British indoor 800m win for Jenny Meadows.

Competing in her first British Championships since 2012 and in only her second competition since the surgery she underwent last year, Irozuru overcame a shaky start to record a 6.73m indoor PB that betters the qualifying standard for next month’s European Indoor Championships in Prague and also moves her from 19th to third behind only Shara Proctor and Katarina Johnson-Thompson on the UK indoor all-time list.

After a foul in the first round, the Sale Harrier got a mark of 6.23m on the board before her winning leap in the third round. She decided to sit out the final three jumps and her PB was more than enough to get her the gold ahead of Sarah Warnock with a best of 6.37m and Commonwealth silver medallist Jazmin Sawyers with 6.32m. Double world junior champion Morgan Lake, who won high jump silver behind Johnson-Thompson on Saturday after clearing a UK junior record height of 1.94m, fouled in the first round and didn’t return to the competition.

“It’s amazing to become British champion – I’ve never done it before, not even at junior level,” said Irozuru.

“It’s great to come away with my first senior title and a personal best. To jump 6.73m gives me confidence as it’s the European standard.”

The 25-year-old, who has an outdoor best of 6.80m but has struggled with injury in the last couple of years, added: “It’s my second competition of the year after having surgery to the end of last year. It’s going well out at the World Athletics Centre in Arizona. I’m trying to be more mindful of my body and an awareness of how I am feeling.”

Lake said: “I felt a bit flat during warm up so it is nothing serious. I’ll just go back to training now and work on a few things for the upcoming competitions.”

Having looked comfortable at the front of the women’s 3000m field, victory for Emelia Gorecka on her indoor debut looked well within reach. The 21-year-old, who secured her first major senior cross country win at the Morrisons Great Edinburgh Cross Country in January, led with just over a lap to go but Ireland’s Sara Treacy put her foot down at the bell and started to pull away. Gorecka clawed her way back and had there been an extra foot would probably have taken it, but Treacy held her off and clocked 9:06.23 to Gorecka’s 9:06.27 for the win and an outright PB. With Treacy not eligible for the title, however, gold went to Gorecka, while Judd – who had enjoyed vocal support at the EIS, ran 9:09.67 for silver. Bronze went to Charlene Thomas with 9:11.67. 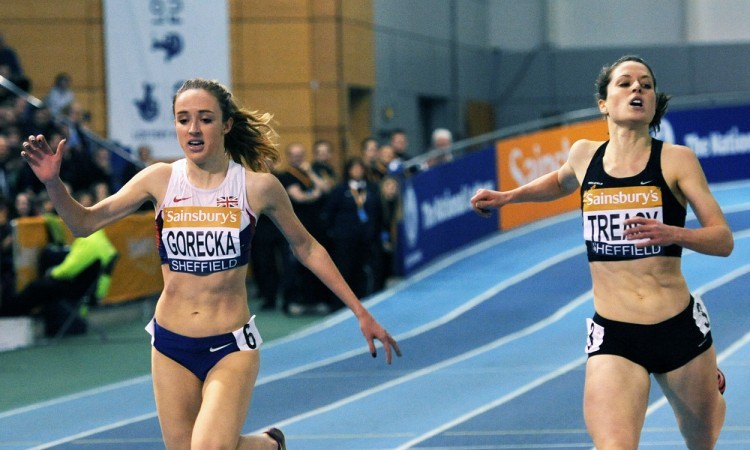 There was drama in the women’s 400m final as leaders Seren Bundy-Davies and Margaret Adeoye fell on the final bend, with Laura Maddox coming through before being pipped on the line by Kirsten McAslan who grabbed the gold in a 53.05 indoor PB. Maddox secured silver with 53.07, also a PB, while bronze went to Loren Bleaken who clocked 55.87 behind Norway’s Tara Norum with 55.37. Levine bagged a record fifth British indoor 400m title, the 2013 European indoor champion also securing a qualifying standard for Prague of 46.86. Jarryd Dunn and Jamie Bowie clocked 47.05 and 47.18 for silver and bronze respectively.

Another European Championships qualifying time was run in the women’s 60m hurdles as Serita Solomon clocked 8.04 for victory. Behind her, Lucy Hatton – who equalled the UK under-23 record with 8.06 earlier this month to miss the qualifying mark by just one hundredth, again clocked that exact time in the runner-up spot. She had earlier run an easy-looking 8.09 in the heats. Bronze went to 19-year-old Yasmin Miller after a 8.18 PB, while Johnson-Thompson also again revised her best, clocking 8.25 for fourth after her record-breaking high jump performance on day one of the championships.

Having gone sub-2:00 for 800m in her two other outings this season – her 1:59.21 in Vienna easily a Prague qualifying time and the quickest indoor 800m since 2012 – Meadows again impressed in Sheffield. She had strung out the field by 200m, going through half-way in 57.87 and going on to claim a dominant victory in 2:01.43 and secure her seventh national indoor gold over four laps.

Joining her in Prague will be Shelayna Oskan-Clarke who clocked 2:02.91 – a PB which is inside the European Indoors qualifying time – for the runner-up spot. Bronze went to Katy Brown after a PB of 2:03.39.

In the men’s 1500m Charlie Grice was a dominant winner from Ben Coldray. The winning time was 3:49.79 after a 26-second last lap, Grice pacing it well to extend his lead and cross the line more than two seconds clear. Coldray came through for silver, clocking 3:52.28 as John Ashcroft also worked his way past a tiring Steve Mitchell, clocking 3:52.48 for the final podium place.

Over in the women’s race and Laura Muir regained the 1500m title she won in 2013, clocking 4:13.06 to beat Alison Leonard who just missed the standard for Prague with a 4:13.57 PB. Third was Ireland’s Claire Tarplee with 4:15.67, while Melissa Courtney was a couple of seconds behind, clocking 4:17.90. Racheal Bamford, suffering with a hip niggle, did not start.

It was a close finish in the men’s 800m final as front-running Guy Learmonth held off James Bowness and Mukhtar Mohammed to claim his first British indoor title in 1:49.00 after two silvers and two bronzes in the past. Bowness with 1:49.06 PB secured silver ahead of Mohammed with 1:49.12 for bronze.

The day’s action had got underway with an unofficial world record as Aled Davies threw 15.62m and then 15.93m for a mark that is further than his own Paralympic world shot put mark. The first medals of the day were decided in that competition as Zane Duquemin successfully defended his title with a best of 17.72m, while Scott Lincoln threw 17.37m in the final round to move from bronze to silver medal position. Bronze went to Youcef Zatat with 17.14m.

Davies had recently spoken to AW about his coaching switch and change of technique, explaining how he wants to throw as far “as able-bodied athletes” and has 18-plus metres in mind for the shot.

After four fouls, one leap was all it took for Commonwealth silver medallist Laura Samuel to retain her national triple jump title. Her 13.66m in the fifth round was an indoor PB to replace Zainab Ceesay as leader, Ceesay having leapt an indoor PB of 13.12m in the third round from her only legal jump. Zara Asante added one centimetre to her overall PB set in 2013 with 13.00m for bronze.

High jump gold had been secured by Allan Smith at 2.22m but with the title in the bag he went on to clear indoor PBs of 2.26m and then 2.29m, a Prague qualifying height, before calling it a day after two attempts at 2.31m. In his first year as a senior, Chris Kandu secured silver after clearing 2.18m and beating Poland’s Robert Wolski on countback. Bronze went to Matthew Roberts with 2.13m. Luke Cutts lived up to his billing as favourite to win the men’s high jump with a 5.55m clearance ahead of 17-year-old Adam Hague and Andrew Sutcliffe, both with 5.45m.

Walks events were added to the programme this year and as expected Tom Bosworth dominated the men’s 3000m race, clocking a 11:30.35 PB for the second quickest ever time by a British athlete. Behind him, silver went to Callum Wilkinson with a 12:24.38 PB. Canada’s Creighton Connolly was next over the line with 12:25.68 so bronze went to Guy Thomas with a 13:01.60 PB. The field also included Francisco Reis who, at 54 years of age, is the oldest athlete to have competed in the British Indoor Championships.

Italy’s Tatyana Gabellone won the women’s 3000m race walk, clocking 13:24.96 for a stadium record and a time just outside of her PB. The British title went to runner-up Emma Achurch, the 17-year-old clocking a national junior record time of 13:29.19, while silver went to Sophie Lewis-Ward with a 14:21.93 PB. Michelle Turner bagged bronze in 14.30.70, while Bethan Davies, who had been leading, was disqualified for lifting.

There was a Hylton twins one-two in the women’s 200m final as Shannon grabbed gold ahead of sister Cheriece – 23.69 to 23.80. Joey Duck bagged the bronze in 23.96. Dominant through the rounds, Antonio Infantino went on to run a 20.96 indoor PB in the final to take the men’s title ahead of Omololu Abiodun with a 21.18 PB and Dannish Walker-Khan with 21.74.

» Full results can be found here, while an online day one round-up is here. See the next issue of Athletics Weekly for more as it will contain 15-16 pages of photographs, reports and results from Sheffield