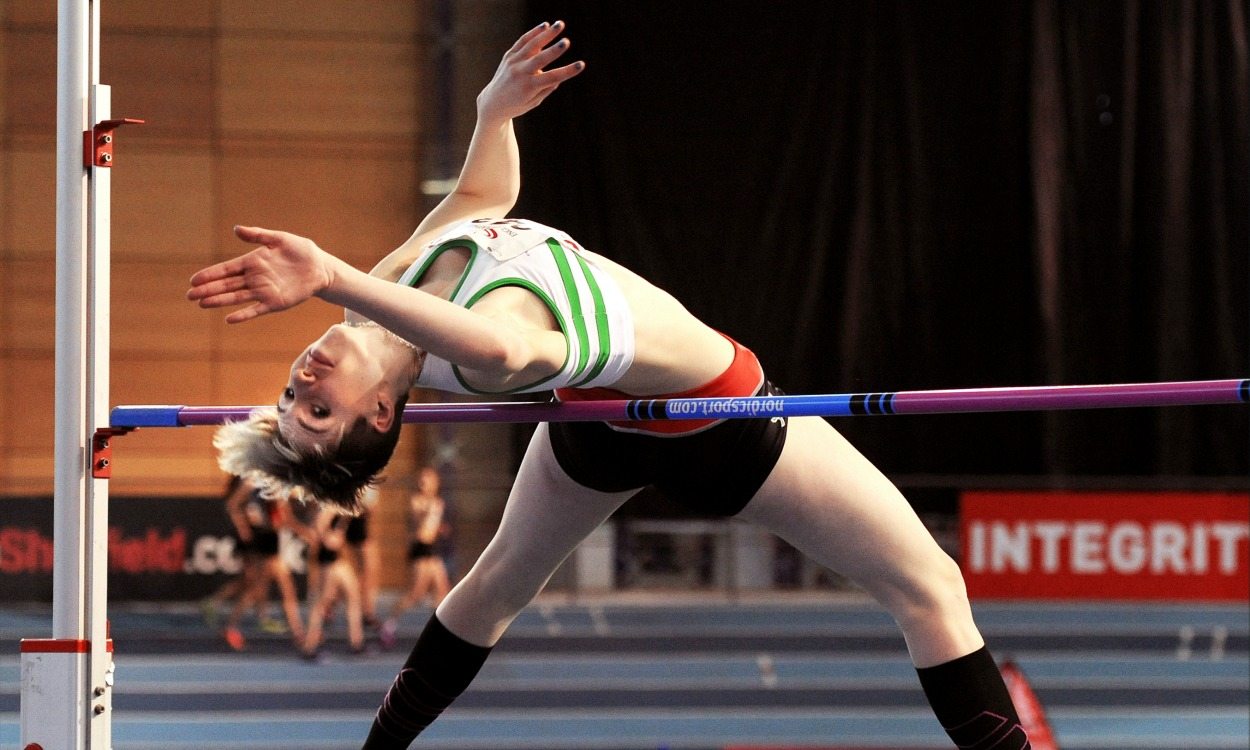 Six-footer Abby Ward has already jumped over her own height, but she has set her targets even higher

Having improved her PB by nine centimetres to 1.89m indoors earlier this year, 17-year-old Abby Ward is not ruling out selection for the Rio Olympics this summer.

The talented Wakefield athlete knows she will have to improve her best by another five centimetres to achieve her aim. However, judging by her improvement already this year, which saw her claim bronze at the Indoor British Championships for seniors, win the England Athletics under-20 indoor title and go to second on the UK junior indoor all-time list, you would not want to bet against her.

Commenting on her good form indoors, Abby says: “I hoped to get a PB, as I had been training hard all winter. I changed coach to Ian Hill and actually started to work hard. I had never done a winter session before this year, not even a fitness training session.

“I just used to turn up and jump and tried to work a bit on my technique. In Sheffield for the senior championships, I was really nervous, but it went really well and I felt I made my mum and dad proud. I like jumping outdoors more, so I hope I can go higher this year.”

Abby’s relaxed approach to training had served her well, as before 2016 she had a PB of 1.80m and had English Schools, SIAB Schools International and UK School Games titles to her name from 2014.

But the teenager knew that to make the next step, she had to start doing more and that is where she is quick to credit the input from the experienced Hill.

“Ian has helped me in many ways,” she says. “Firstly, he has changed close to everything with my technique and run-up, which seems to be working really well. I now train on a Tuesday, Wednesday and on a Saturday. Ian even put my gym session into place for me.”

Standing at 6ft 1in (1.85m) tall, Abby has already achieved the feat of jumping over her own head. However, if she needs any family members as motivation to jump over, Abby has plenty to aim for, as one of her three brothers is 6ft 9in (2.05m), making Abby the small one in the family.

“Jumping over my head height is terrifying, but I hope to go higher,” she says.

Having already obtained the qualifying mark, Abby’s target is to gain selection for the European Youth Championships in Tbilisi, Georgia, this summer. She would not turn down Olympic selection, although she knows that more realistically she is aiming for the 2020 Olympics, where she probably would have to be able to jump around the height of her tallest brother to make it to the top of the podium.

“I would love to jump in the 90s,” she says. “That would be a great achievement for me and it makes me very excited. I am looking forward to this year. I think I have to jump 1.94m for the Olympics, so I am only 5cm away, but I’m aiming more for 2020.”

Abby came from a dancing background, which she thinks has both helped and hindered her in the athletics event. She says: “I used to run on my tiptoes, because I was so used to pointing my feet. Ian and I have worked really hard on this and it is now a lot better. However, an advantage is that I am naturally really flexible, which helps a lot for high jump.”

Abby who is studying PE, dance, art and textiles at New College in Pontefract, adds: “After one session of high jump, I was hooked.

“I love high jump because it makes me happy and it is always exciting with new challenges and new heights. There is always something to improve.”

You can find further performance stats on Abby on Power of 10 here.