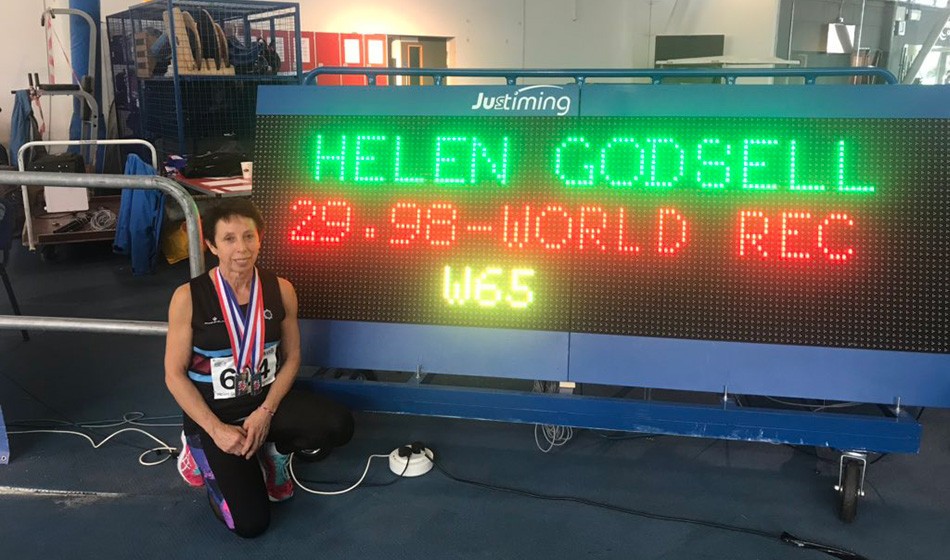 Helen Godsell and Clare Elms set world records in the British Masters Indoor Championships at Lee Valley as UK athletes warmed up for the world championships in Poland later this month.

Clare Elms has also made the most of hitting a new age group this winter and she had previously set world W55 records over 800m and 1500m (twice each), the mile and road 5km.

Here she contested the 3000m where her previous attempt in February fell short.

Winning the overall women’s race, her 10:13.40 took five seconds off Fiona Matheson’s world mark and gave her a clean sweep of all middle distance marks.

Elms pushed on herself in the last kilometre and covering that in 3:22, she was able to pull away from W40 winner Doyle and win by over five seconds as Doyle won W40 gold in 10:19.42.

It was not the only record in the race as though lapped by Elms seven times, Richard Pitcairn-Knowles set a UK M85 record of 18:55.69.

Having not been able to do any faster training during the week due to niggles picked up at the Surrey League cross-country, Elms was delighted to run so well but admitted she almost did not bother attacking the record when she saw it would be a mass race for all age groups.

Elms’ race was the last of the two-day meeting and the race before saw a similar record time. 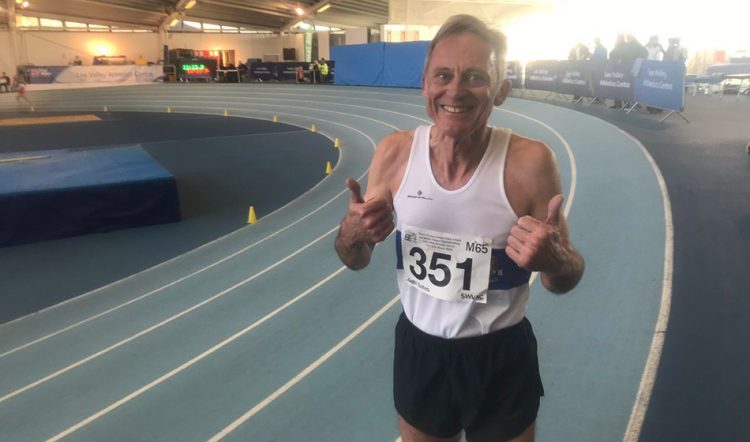 Earlier, world W55 champion Virginia Mitchell was just over a second outside Elms’ 800m world record with a 2;26.89 clocking, while Kevin Archer just missed the UK M65 record with 2:25.71 in defeating new mile record-holder Dave Bedwell, who had beaten him easily at 1500m.

Ian Richards thought he had a M70 3000m walk world record of 15:15.86 when he finished but the judges gave him four red cards on the last lap and he was disqualified.

Multi-talented Di Norman won gold medals at 60m hurdles, high and long jumps though was just beaten in the shot.

Pick of the younger age groups sprints was W45 Michelle Thomas who set an 8.22/27.10 double while W80 Evaun Williams was the pick of the heavy throws, which were held in windy conditions outside.

There will be a more detailed report in this week’s magazine together with photographs from Tom Phillips.

It was not the only BMAF Championships of the weekend as the cross-country event took place at the Stormont Estate in Northern Ireland.

The fields were affected by the clash with the indoor event and the UK Inter-Counties but saw exciting races.

Rebecca Luxton, who was only 24th in the early winter British Masters International, came through strongly to catch home athlete Amy Bulman who had built an early lead. Luxton ran 25:48.