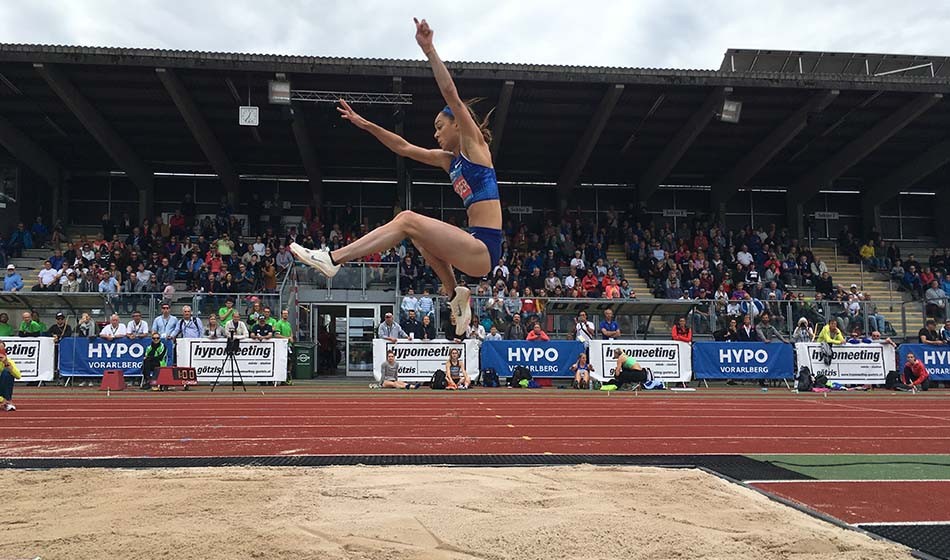 With a heptathlon score of 6813, Katarina Johnson-Thompson set a world lead and a PB by 54 points as she took victory in emphatic fashion in Gotzis.

The Briton finished 337 points ahead of runner-up Laura Ikauniece of Latvia as Xénia Krizsán of Hungary was third and Carolin Shafer of Germany fourth in the premier combined events contest outside of major championships.

Johnson-Thompson’s performances moved her to No.18 on the world all-time rankings and will send a message to Olympic and world champion Nafi Thiam of Belgium, who was not at the Austrian meeting after starting her season late due to an injury earlier this year.

The long jump caused her fans a few jitters after she fouled her first (and third) attempts but her second round leap was superbly solid and she showed her confidence by blasting through the first lap of the 800m in 59.4 before fading in the last lap to finish a fraction behind the fast-finishing American Erica Bougard.

“I wanted to come out and put solid performances out,” she told the organisers moments after finishing.

“I was just trying to relax. I didn’t overthink things,” the French-based athlete added. “I stuck to my key things and the 800m was a great learning experience too.”

Was she surprised with her score? “Definitely,” she said. “To get over 6800 points is great. The crowd were really good. They follow you around from event to event and it’s my favourite place to compete in in the world.”

Johnson-Thompson’s score still places her No.3 on the UK all-time rankings but she is now just 18 points behind Sydney Olympic champion Denise Lewis, although Jess Ennis-Hill’s best of 6955 from London 2012 comfortably remains the No.1 British mark.

GB team-mate Niamh Emerson was also competing in the heptathlon Gotzis but withdrew during the first day after aggravating her long-standing knee problem. The youngster has been managing the niggle since 2017 and has altered her high jump technique to take pressure off her take-off leg.

In the decathlon Damian Warner built on his fine first day performances to seal his fifth overall win in Gotzis with a score of 8711.

» See the May 30 issue of AW magazine for more coverage