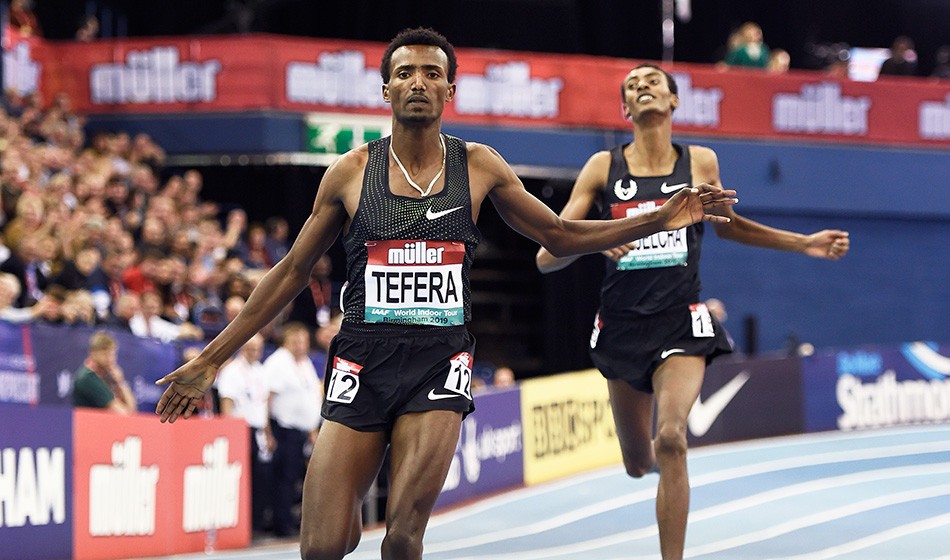 At the turn of the millennium, the star draw at the annual televised indoor grand prix in Birmingham was Haile Gebrselassie. Whizzing around the track to the sounds of his favourite pop tune – Scatman – he set world records at 2000m in 1998, 5000m in 1999 and two miles in 2003. The popular Ethiopian also won the world indoor 3000m title in Britain’s second city during his 2003 season.

Now, a couple of decades later, another Ethiopian is lighting up indoor athletics meetings in Birmingham. Samuel Tefera won the world indoor 1500m title last year and on Saturday he smashed Hicham El Guerrouj’s world record after a terrific battle with another Ethiopian, Yomif Kejelcha.

After missing El Guerrouj’s world indoor mile record of 3:48.45 by one hundredth of a second at the Millrose Games one week earlier, Kejelcha was billed as the man most likely to threaten the 1500m record. But Tefera, who is still only 19, had the strength and speed to hold off Kejelcha in an epic duel that saw them lead home a field full of quality performances.

There was no Scatman music on Saturday as Tefera and Kejelcha duelled it out. But the capacity crowd at Arena Birmingham made themselves heard as the athletes followed the brutal pace of pacemakers Bram Som and Jordan Williamsz through 400m in 55.69, 800m in 1:52.70 and 1200m in 2:49.28.

Kejelcha led during the latter stages but Tefera sped into the lead just before the final bend, extended his slim lead down the finishing straight and leaned into the finish line to enter the history books.

“I can’t believe that,” said Tefera. “I’m delighted with the outcome and to have the world record is a special feeling.”

Ironically, Tefera was inspired by Kenenisa Bekele, though, not Haile Gebrselassie. Born in 1999, after all, he was not even alive when Gebrselassie set his early records.

Kejelcha, who is still only 21 and now training with Alberto Salazar in Oregon, said: “I didn’t do it on the day. I tried the first time and didn’t make it but I’m happy with how I did. I’m a young international and for myself and Samuel to push each other is a great thing especially today.”

Fourth-placed Kerr moved through strongly in the race to run a time that places him No.3 on the UK all-time rankings behind Lee Emmanuel and Peter Elliott – the latter holding the UK record with 3:34.20 from 1990.

“The British record and the Scottish record are pretty close and I’m honoured to have that to my name now,” said Kerr, who took a break from his exams period at university in the United States to race in Birmingham. “Training has been great. I’ve stayed away from injury and everything is really starting to come together on the circuit.”

Kerr is due to fly back to the United States on Sunday although he’s open to the idea of racing in the European Indoor Championships in his native Scotland. The fact he did not compete in the British Championships will probably count against him when the team is picked this weekend, however.

“I still want to be considered for the European Indoors,” he said. “I just wasn’t able to run the trials because I’ve got university exams. I would have had to travel here and back – with three flights every time – and that takes a toll on your body. I’d already accepted I’d miss a Euro spot.”

He added: “They can still pick me if they want to. I’ve shown I’m the strongest British 1500m guy on the day. I told British Athletics my plans in December – that I had classes for the next six months or so.

“That (exams) has to come first at this point. I’m 21 and hopefully I’ve a long career ahead of me. I was in two world-class races in two weeks (Millrose Games and Birmingham). I’ve shown I can run fast. I’m happy with that and hopefully the selectors see I’m fit and ready to race.”