Track action off to an eventful start in Doha 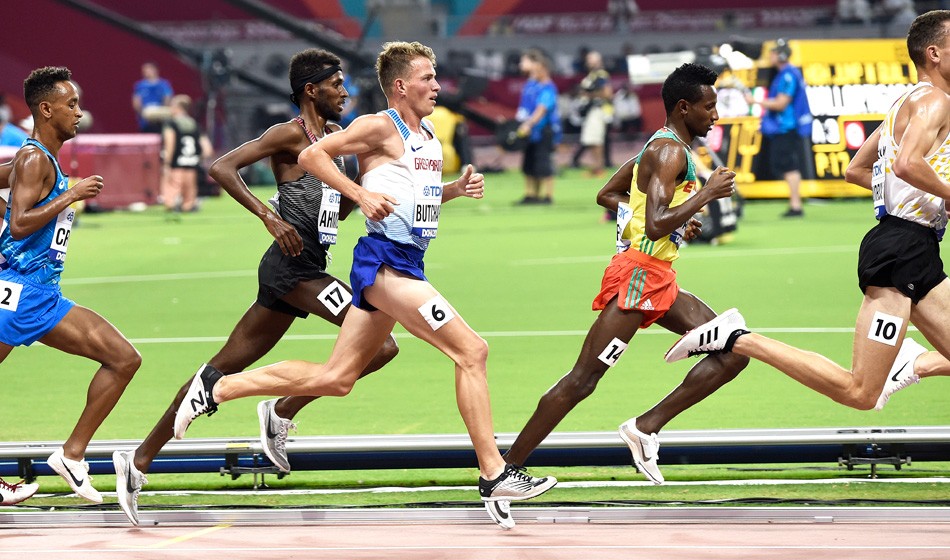 It was an eventful opening night on the track as the IAAF World Championships got under way in Doha.

Much of the attention fell on the men’s 5000m heats, from which Norwegian star Jakob Ingebrigtsen was disqualified, then reinstated, in a race which also featured a moment of sportsmanship to remember involving two previously unknown athletes who finished the night as internet stars.

Across the Friday night programme, many of the biggest track stars on the planet underlined their strength during a session where qualifying was the main aim and there were mixed fortunes for Britain’s athletes.

Ingebrigtsen out, then back in again

The most incident-packed event of the session was undoubtedly the men’s 5000m.

Ethiopian Selemon Barega won the opening heat in 13:24.69 from Kenyan Jacob Krop and fellow countryman Muktar Edris but it was the events taking place behind them which ultimately created the biggest stir.

European champion Jakob Ingebrigtsen appeared to have finished fourth in 13:25.20 in the crowded sprint for the line and secured one of the five automatic qualifying spots. However, he stepped off the track in the process of attempting to pass Birhanu Balew of Bahrain with around 200m to go and was subsequently disqualified. The main beneficiary of that decision was Britain’s Andrew Butchart, who had finished in seventh after his run of 13:26.46 and just outside of a qualifying berth.

The Scot was then placed into Monday’s final but, following a Norwegian appeal, Ingebrigtsen was reinstated, meaning Butchart ultimately misses out.

His team-mate Marc Scott was 15th in 13:47.12 but another story began to develop minutes after all but two of the competitors had finished.

Braima Suncar Dabo of Guinea-Bissau had been lapped twice and was firmly in last place as he took the bell behind Jonathan Busby, who was also well adrift. However, the man from Aruba began to really struggle and, with around 200m to go, was having trouble maintaining forward momentum let alone any kind of running stride.

As Busby began to effectively dissolve in the Qatari heat, Dabo stopped to lend a hand and both men shuffled over the line. 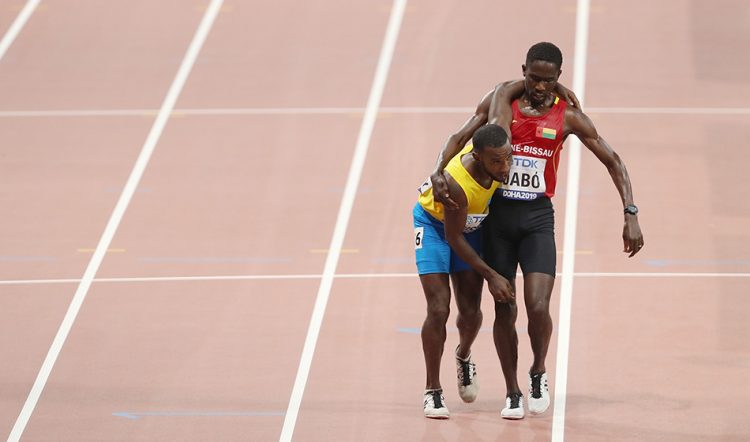 Photo by Getty Images for IAAF

Busby was tended to by medics at the finish but still had the wherewithal to stop his watch! He had recorded what was listed as a personal best of 18:10.68, after all, but was officially disqualified due to the assistance he received, while Dabo’s 18:10.87 stands.

Coleman in charge for 100m qualifying

The first track action came in the men’s 100m preliminary heats, with Taymir Burnet of the Netherlands fastest overall thanks to his run of 10.23 and the first ‘winner’ of the championships.

The big sprinting names entered the stage at the first round proper and Christian Coleman looked in ominously good form in his pursuit of gold, qualifying fastest for tomorrow’s semi-finals as all three British competitors also progressed.

If the American has been affected by the controversy surrounding him following the charges – since dropped – around his missed drugs tests, then it didn’t show as he clocked 9.98 and looked thoroughly untroubled in winning the sixth and final heat.

British champion Ojie Edoburun had to rely on a fastest loser’s spot, his 10.23 in the opening heat, meaning he qualified by just eight thousandths of a second.

The smoothest progress from a British point of view was made by Zharnel Hughes, who won heat three in 10.08 (-0.8), albeit he wasn’t entirely happy with his performance.

“I know the start wasn’t amazing but I’ll work on it,” said the European champion. “I’ll have to find the setting on the block, it’s a bit different from what I’m using but once I find it I’ll be fine.”

Asked about the conditions in the Khalifa International Stadium, he replied: “Beautiful, beautiful, I love it here.”

Sharp misses out in women’s 800m

There was a surprise in the women’s 800m as Britain’s Lynsey Sharp, fourth-fastest in the world this year, failed to qualify for tomorrow evening’s semi-finals.

Running in the sixth and final heat, the Scot had looked well placed for one of the three automatic qualifying spots but faded in the closing stages and clocked 2:03.57 which meant she had to settle for fourth place and narrowly missed out on a fastest loser’s place.

Uganda’s Winnie Nanyondo was the fastest qualifier overall in 2:00.36 ahead of Jamaican Natoya Goule (2.01.01), while America’s world leader Ajee’ Wilson had no qualifying trouble, controlling her race throughout to clock 2:02.10 and finish first in heat one.

Alex Bell was another athlete who had to rely on her closing speed to make sure of qualification, just taking third place in the penultimate heat in 2:03.34.

Karsten Warholm barely broke sweat, despite the Doha heat, to win the opening heat of men’s 400m hurdles qualifying. The defending champion clocked 49.27 ahead of Irishman Thomas Barr, second in 49.41.

It was Qatari athlete Abderrahman Samba who qualified fastest, however, thanks to his run of 49.03 in heat three.

Commonwealth champion Kyron McMaster (49.60) also went safely through, as did American Rai Benjamin (49.62), while Britain’s Chris McAlister was an automatic qualifier from heat five in fourth place with 49.73.

Kenya’s Beatrice Chepkoech received one of the biggest cheers of the night from the noisy African contingent in the stands as she qualified fastest from the women’s 3000m steeplechase heats in a time of 9:18.01 from America’s Courtney Frerichs (9:18.42), while defending champion Emma Coburn was sixth-fastest 9:23.40, two places behind fastest European Anna Emilie Moller (9:18.92).

None of the three British athletes qualified but Elizabeth Bell came remarkably close, clocking 9:30.31 to move to third on the national all-time lists for sixth place in heat two.

There was also a personal best for Aimee Pratt, who was eighth in heat one with 9:38.91.

It was a painful night for Rosie Clarke in more ways than one, the British champion suffering from a fall during heat three as she finished 12th in 9:49.18.

A field events report can be found here.