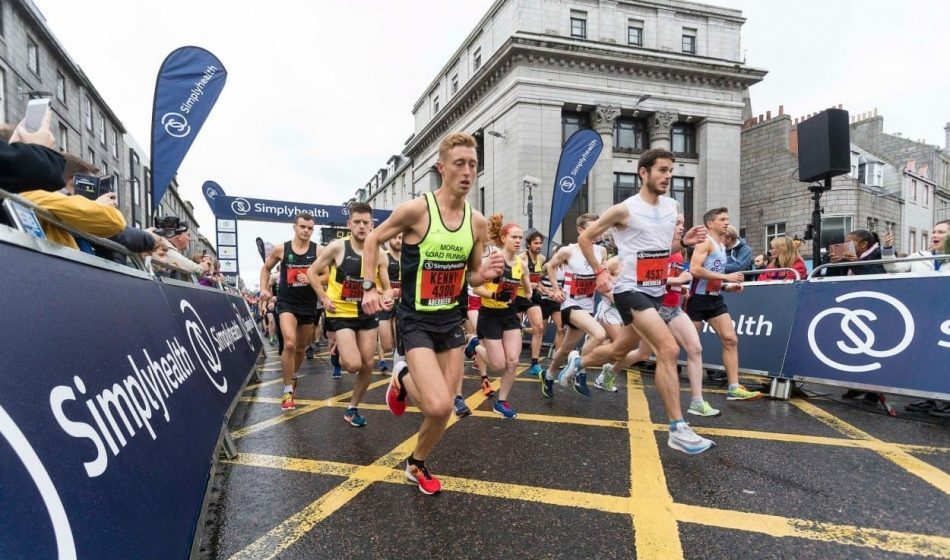 Kris Jones won the half-marathon by around 1500m in 66:35. Kyle Greig was second in 71:23.
Sheena Logan won the women’s race in 81:56. Fuller details and photographs will appear in this week’s magazine.

GB international Marc Scott smashed the course record and went top of the UK rankings with 13:45. Scott, who finished fifth at the European 5000m in Berlin, achieved his time around the quiet lanes of the picturesque village of Kingsley despite blustery conditions.

The time took 15 seconds off the previous record held by fellow GB international Ben Connor and was the fastest on the roads by a British athlete since Andy Vernon in 2012. Lewis Moses was second in 14:22.

The women’s race was a much tighter affair with Lauren Howarth winning in 16:03 after recovering from a broken foot in February. Eleanor Davis was second in 16:16 while Abi Howarth joined her sister on the podium and managed a PB of 16:45 in third. More details and photographs of the event will appear in this week’s magazine.

Paralympic champion Jonnie Peacock raced his first 100m race of the season – and the first under a new IPC category (T64) – running 11.07/4.2 in his heat before finishing eighth in the final, with 11.31.

Jade Lally won the discus with 56.14m while in the javelin Emma Hamplett, the silver medallist at the British Championships, threw 51.27m. More in this week’s AW.

London Inter Club Challenge, Hendon, August 25
Canadian M35 Jackson Hinton won the sprint hurdles at London in a windy 14.20, having guested at the BMAF Championships earlier in the day more than 100 miles away in Birmingham in 14.21!

USA’s Olympic relay gold medallist English Gardner competed for the first time since July 2017 and won the 100m in a fast 11.02 with Britain’s Imani-Lara Lansiquot third in 11.24.

Henrik Ingebrigtsen produced the best performance of the meeting, winning the 3000m in a European-leading 7:42.72, while Charlie Myers won the pole vault with 5.50m.

The ninth Kamila Skolimowska Memorial changed the location from Warsaw to the new national stadium in Chorzow and more than 41,000 spectators attended. Ronnie Baker won the 100m in a PB and world lead 9.87 (-0.1) as former world record-holder Asafa Powell was fourth in 10.24.

Steven Gardiner returned from injury to easily win the 400m in 44.43 with Olympic triple jump champion Christian Taylor third in 45.34 and Rabah Yousif was fourth in 45.92.

Olympic and world 800m champion Caster Semenya won the 400m staged in memory of late Irena Szewinska in a fast 50.06 well ahead of European champion Justyna Swiety-Ersetic’s 51.45. Eilidh Doyle won the B race in 51.87.

Joanna Fiodorow won the hammer with 74.39m as Sophie Hitchon finished seventh with 67.12m. The best British performance came from Sarah McDonald, who finished a close third in the 1500m in a PB 4:03.36 just behind European runner-up Sofia Ennaoui’s 4:03.28 as American Colleen Quigley won in 4.03.02.

Holly Bradshaw finished fourth in the pole vault with 4.60m as USA’s Katie Nageotte improved her outdoor best to 4.80m.

Morgan Lake finished sixth in the high jump with 1.88m. Australia’s Commonwealth champion Brandon Starc went to third on the 2018 world lists with a 2.36m win in the men’s event.

In the women’s 400m, Salwa Eid Naser of Bahrain clocked 50.09 ahead of India’s world under-20 champion Hima Das, who improved her senior and under-20 national record to 50.79.

There was a world-leading 69.72m throw in the discus for Daniel Stahl.

Jordan Bell won a hard fought battle against Conrad Franks to win in 55:11 and also take the North East title held in conjunction. Bell’s father Stewy was a past winner of this race.

Cheryl Parkin won a close battle in the women’s race in 69:09. Report and photographs in this week’s AW.