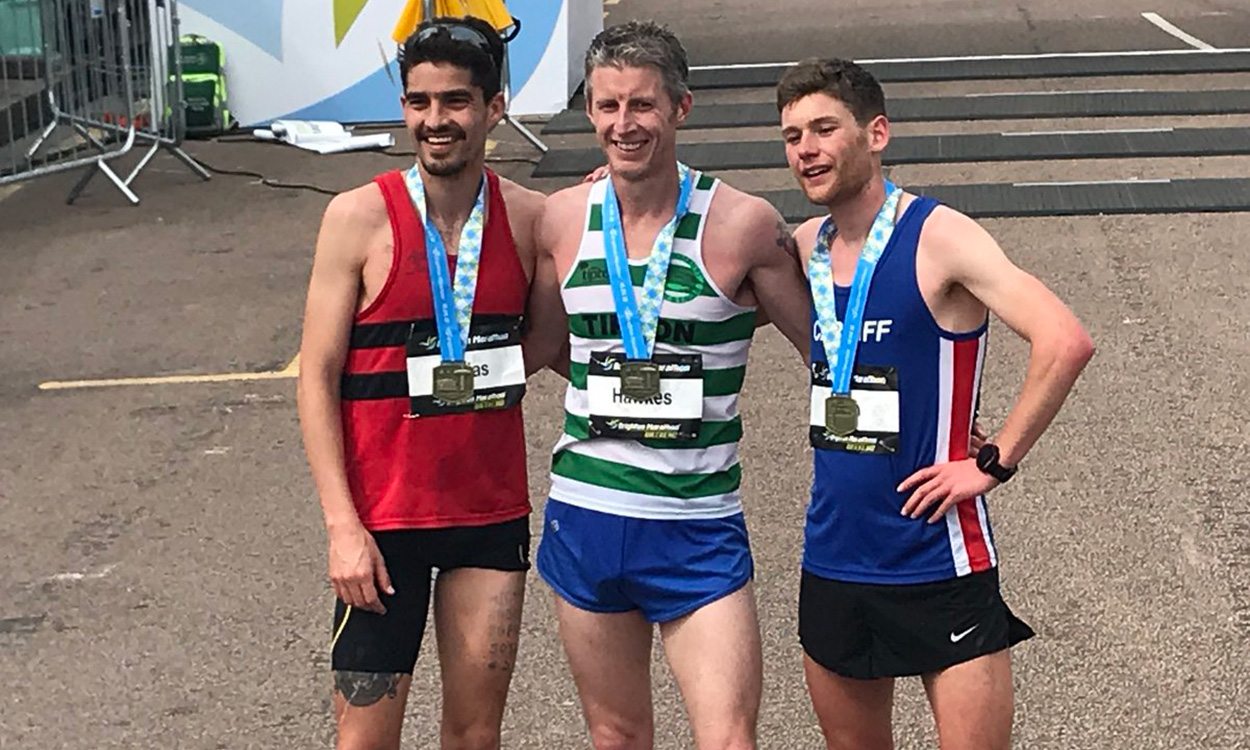 There was yet another dramatic finish to the Brighton Marathon as both Stuart Hawkes and Helen Davies retained their titles as the marathoners enjoyed far better conditions than on the Gold Coast.

For most of the race, Cardiff’s Dan Nash was out on his own. He passed 10 miles in 53:42 and went through halfway in 70:38 with well over a minute lead and that was despite a couple of enforced toilet stops.

He looked strong and with a 5:12 mile up to 20 miles in 1:47:41, the gap had grown to almost two minutes over defending champion Hawkes.

Nash, who was third in the Welsh Cross Country Championships in February, looked strong but past 20 miles suddenly began to slow – clocking miles of 5:23, 5:32 , 5:42 and 5:48 – and Hawkes had him in his sights and had the knowledge he had pounced late in 2017 too.

As they reached the 25-mile mark, Hawkes moved up beside the Cardiff man.

This was a shock to Nash, who immediately reacted and surged and reopened up a gap, but he couldn’t sustain and then, well into the last mile, Hawkes attacked and broke clear and went on to win in a gun time of 2:22:33, five minutes up on his time of 2017.

Local athlete Kevin Rojas of Brighton and Hove finished strongly for third in 2:23:54.

Hawkes’ previous best had been 2:26:53 and this proved to be a four-minute PB.

“I wasn’t aware of how good Dan was and I started to work really hard at halfway to try and catch him. I could see him all the way and then I could see I was catching him,” continued Hawkes, who is pictured above (centre) with Nash (right) and Rojas (left).

“When I caught him he pushed and it was hard to go with it but when he slowed I thought I had to go and I got clear straight away.”

Nash admitted: “I did not quite get it right. I should have held back more and then I went too hard when he caught me. I had to have those earlier toilet stops but it was probably the distance he beat me by.”

There was no such drama in the women’s race. Davies was the obvious class of the field and in better shape than last year as she won by over 10 minutes in 2:38:41.

“I was better prepared this time and knew the course and the conditions were better,” she said. “I had three aims. To win, to defend my time and break 2:40 and I did all three.”

A pacemaker took a pack of five  to halfway in 14:40 before John Beattie kept the pace going.

At the far turn the English National cross-country champion Adam Hickey pushed on but his move was covered and then he made another move which got rid of pre-event favourite Sam Stabler.

Caldwell had been sitting in, but he burst to life in the last kilometre although admitted it was because he had thought he was nearer the finish. It meant he struggled to keep that pace going and he held off a late challenge from Doug Musson.

Unfortunately, the announcer did identify him as Stabler but post-race he was happy enough, saying: “I was not super confident but it was not as hard as I thought it would be. I knew I had something left but I saw what I thought was the finish and I kicked but there was still 400m to go so I had to hang on and they were coming back.

“It’s been a frustrating season as races I planned have been cancelled.”

Musson said: “I thought being a track runner I had a chance but Adam kicked hard at the turn and then with 600m to go and then Luke came from nowhere and kicked by.”

Hickey was third in 29:32 with Beattie, who also has Commonwealth Games experience, was fourth in 29:47.

Charlotte Arter dominated the women’s race. She passed halfway in 16:15 and, using the male competitors, she was even faster on the second half and broke the tape in winning the £1000 award in a course record 32:20, which gave her a £500 bonus.

There was a competitive battle for second won by National cross-country champion Phoebe Law, who set a road PB of 33:15 as she caught Faye Fullerton in the last 400m.

Fullerton ran 33:23 with Charlene Thomas a further eight seconds back in fourth.

To the strains of his big hits ‘Right here, right now’ and ‘Praise you’, local celebrity Norman Cook (aka Fatboy Slim) competed and ran around 50 minutes.

The Sunday races completed a weekend where around 18,000 participated with over 3000 youngsters having taken part in the mile races in Preston Park in hot conditions on Saturday afternoon.