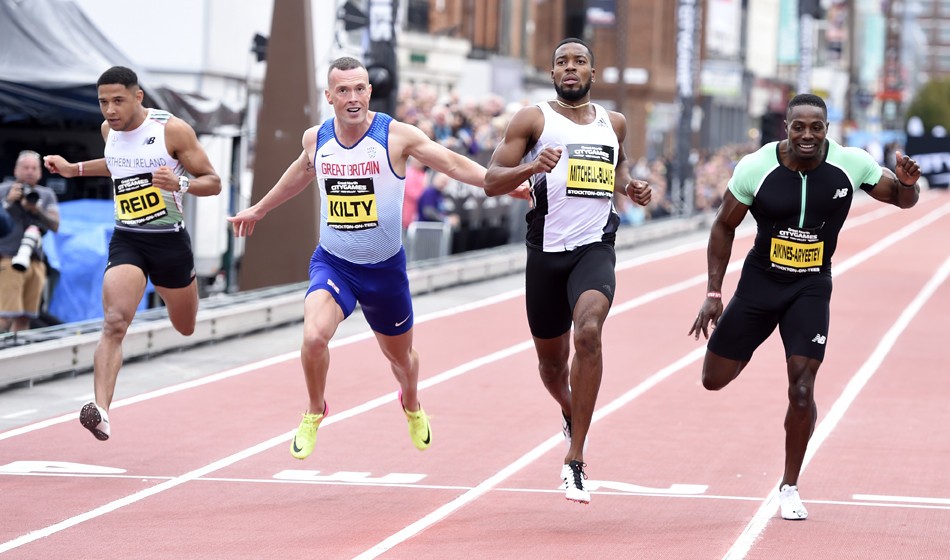 Richard Kilty promised everyone that Stockton-on-Tees would stage a memorable Great North CityGames – and he was right. Large crowds turned out on a bright and breezy day at the Tees Valley venue to watch the local star sprinter plus athletes like the legendary Allyson Felix in a meeting that will live long in the memory.

“Everyone was shocked when it was coming to Stockton as Newcastle and Manchester are really big cities,” Kilty said. “But I told them we have an amazing high street and the fans are incredible.

“The athletes got an amazing reception and the crowd was electric. It was an amazing emotional day for me and one I’ll never forget.”

The 30-year-old later faced a tougher test in the 150m and finished a close third behind Harry Aikines-Aryeetey and winner Nethaneel Mitchell-Blake, the latter clocking 15.43 to win by seven hundredths of a second after a strong finish.

Kilty was returning from a hamstring tear sustained when winning the 200m at the European Team Championships last month. “But I was never going to miss this!” he smiled.

Rarely has Teesside been graced by an athlete of Allyson Felix’s class and the multiple global sprints champion delivered with a 150m victory in 17.37 over Brits Ashley Nelson (17.42) and Beth Dobbin (17.49).

The 33-year-old is a six-time Olympic gold medallist and has won a record 16 medals at the IAAF World Championships and in Stockton she showed her improving form during a comeback season following a baby break.

When it came to popularity with the spectators, Jonnie Peacock almost gave Kilty a run for his money. The 26-year-old, who is preparing for the World Para Athletics Championships in Dubai in November, was also too fast for the rivals in his race as he took the IPC 100m in 11.53 (-1.9) from Felix Streng of Germany.

Similarly, Sophie Hahn showed fellow competitors in the women’s IOC 100m a clean pair of heels by building up a big lead with a lightning start which she never relinquished as she clocked a CityGames record of 13.07 (-1.8).

Abigail Irozuru was all smiles after winning the long jump with a CityGames record of 6.66m (0.4). The Briton beat Quanesha Burks of the United States by four centimetres with Olympic champion Tianna Bartoletta third.

The thumping atmosphere in Stockton was on display in the men’s pole vault as Cole Walsh of the United States beat Charlie Myers of Britain on countback after both vaulters cleared 5.45m in blustery conditions.

Earlier in the day elite mile races took place on the Newcastle-Gateshead Quayside which were won by Jordan Williamsz and Eilish McColgan.

After winning the CityGames mile in 2017 and 2018, Williamsz made it a hat-trick of victories as he pipped fellow Australian Ryan Gregson to the post in 4:10.95, while McColgan (pictured below) clocked 4:32.04 to beat Melissa Courtney by 1.7sec despite admitting she wasn’t sure exactly where the finish line was. 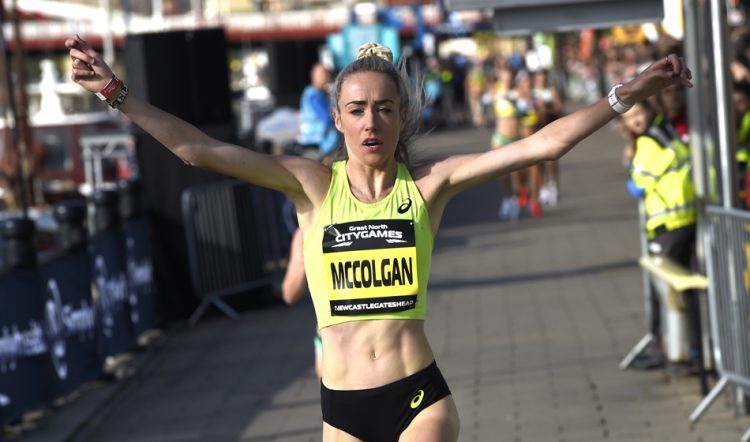 Back in Stockton, Tony van Diepen of the Netherlands and Jaide Stepter of the United States won two competitive 400m races that began on the road and went up a tiny ramp before finishing on the temporary synthetic track.

Van Diepen, a 400/800m specialist, was boxed in as the field reached the closing stages but he extricated himself in time to burst clear and clockd 47.40 to beat Tyrell Richard of the United States and Britain’s Martyn Rooney and Dai Greene, whereas 400m specialist Stepter clocked 54.10 to out-pace Brits Amy Allcock and Jessie Knight.

In the sprint hurdles, Queen Claye put on a great show for the crowd – during the race and in her exuberant post-race interviews – as the American clocked 13.08 (0.7) ahead of Britain’s Cindy Ofili, whose fine comeback from Achilles injury continues as she ran 13.11 in second.

The men’s 110m hurdles saw Damian Czykier of Poland run 13.93 (-1.3) to beat British champion David King by one hundredth of a second.