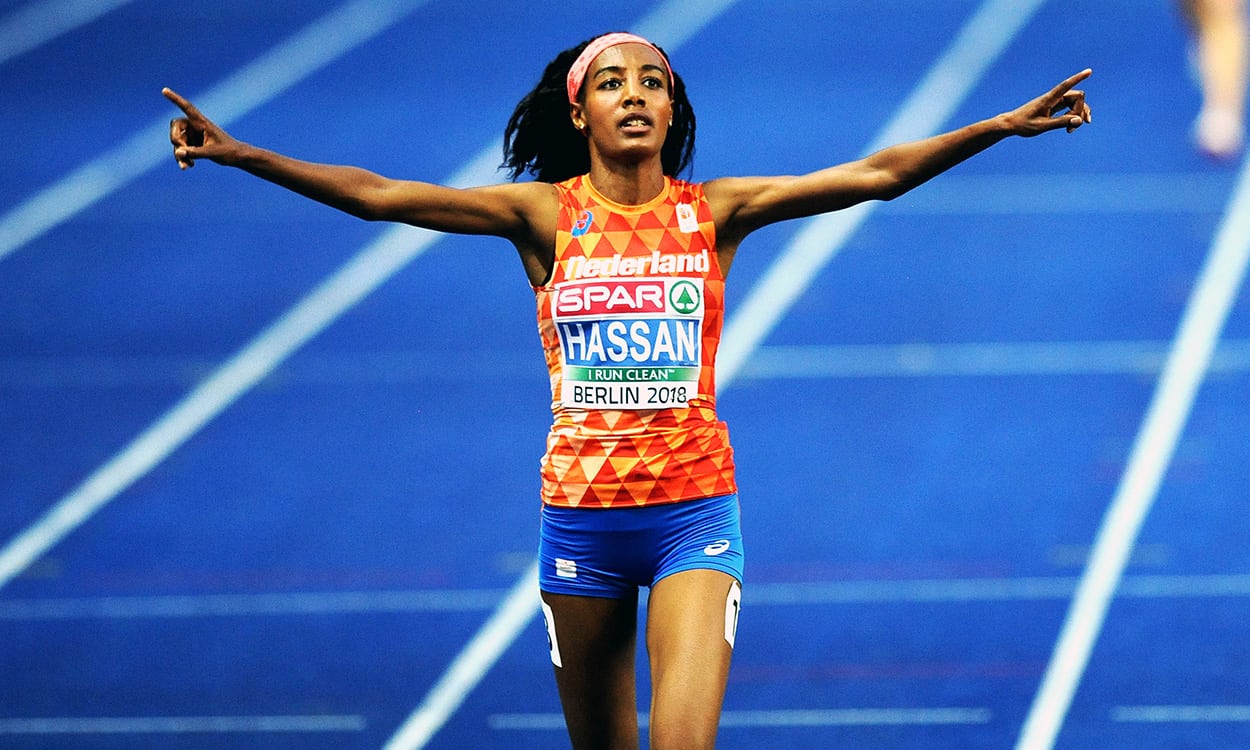 Eilish McColgan (pictured) won a hard-fought European silver medal in a 5000m race which was predictably won by Sifan Hassan of the Netherlands. It came after Lonah Chemtai Salpeter, the 10,000m gold medallist earlier in the championships, launched her finishing sprint one lap early as she challenged Hassan, only to discover there was another 400m to go.

McColgan may be the daughter of renowned front-runner and world champion Liz, but she has mostly had the reputation of holding back and using her potent kick. So it was a surprise when she bounded along in front of the field, even opening up a bit of a gap as she passed 1000m in 3:03.01 and then 2000m in an even faster 6:01.62.

During the third kilometre the defending champion Yasemin Can of Turkey burst past but McColgan quickly followed and also quickly responding were Hassan and Salpeter.

Much to the home crowd’s delight, European under-23 champion Konstanze Klosterhalfen pushed on to the front but did not sustain it and the pace slowed through 4km in 12:03.30 with Salpeter ahead.

With two laps to go Hassan pushed on and then put a dramatic change of pace in 500m out. Only Salpeter covered it, which was a shock as she did not have a reputation for a fast finish, and as they approached the bell both Hassan and the Israeli were flying.

At this stage Salpeter was a metre down but as she hit the bell, she put her arms up, smiled and stopped and it took a moment for her to realise that Hassan was still sprinting and she had a lap to go.

'Oh my word!' Salpeter pulls up thinking the race is over as the bell goes… unbelievable! pic.twitter.com/hJUmMDlWqJ

Salpeter got going again, but McColgan quickly passed her and then with 100m to go so too did Can.

She said: “That was an amazing race. My plan was to go in front on the last 800m for the final sprint. I did what my coach told me. On the last lap I saw Salpeter, I thought she wanted to do a longer sprint, I thought that she wanted to pick up the race. And when she stopped, I went ‘I am right! What is she doing? What should I do?’ I heard the people shout. It was crazy. And then I realised that I was right and continued my race for the final lap.”

Seven seconds back, McColgan was well clear in second and her 14:53.05 was probably her best ever performance.

She said: “Before the race, my mum told me to believe in myself, because I’m such a strong runner, and I can go fast. My plan was to give it my all and I’m really pleased I’m coming home with a medal.

“I knew I could run fast, but I don’t have the same speed of those girls in the 1500m I’m so tall, that it takes me some time to get my legs going. When I saw Sifan Hassan and the Israeli athlete going for it in the home straight when there was still one lap to go, I was really confused. In fact, I was really annoyed at myself because I thought I had timed it wrong. I was really tempted to stop, but I’m really glad I didn’t.”

A delighted @EilishMccolgan reflects on last night’s 5000m final and her silver success, plus the 1500m medals won by @lauramuiruns and her room-mate @LauraWeightman just before. “Seeing them was a bit of a boost. I thought ‘right, I have to do this now’.” #Berlin2018 pic.twitter.com/nuGzMt6tcV

Can’s 14:57.63 took bronze while a distraught Salpeter looked like she might get some consolation with an Israeli record 15:01.00 despite her erroneous stop. However, to add insult to injury, she was disqualified so the record will not count.

A tired Klosterhalfen advanced to fourth and she was being closed down on the last lap by Commonwealth 1500m bronze medallist Melissa Courtney who broke Angela Tooby’s long-time Welsh record with 15:04.75 in fifth with a very strong last lap to beat 10,000m runner-up Susan Krumins.

Another predictable winner was world and Olympic champion Anita Wlodarczyk in the women’s hammer.

A poor first throw of 69.35m was rectified by a second of 76.50m which sewed up the gold medal as none of her rivals were capable of matching such distances.

The Pole had not finished there though as she threw 77.82m in the third round and then a 78.94m championships record in the fourth.

In the fifth round, she had another top-class throw of 78.55m and so easily had the best four throws of the competition – and it was her fourth European title.

Second went to Alexandria Tavernier who opened with a French record of 74.78m and also had good back up throws of 74.20m and 73.92m.

Poland won their second medal with Joanna Fiodorow matching her bronze from 2014 with a 74.00m throw, while Poland also had fourth with Malwina Kopron’s 72.20m.

Olympic bronze medallist Sophie Hitchon performed better than she did in qualifying but was still some way off her Rio form.

The Briton opened with a 68.80m but needed a 70.52m third round throw to throw again. However, none of her final three throws were measured.

She said: “I just need some more time with the way I’m throwing now – it’s been such a big change in my technique this year. I could have easily not competed and I’m working on new stuff but I want to compete for my country and went in wanting to give it everything I’ve got.

“I’m obviously disappointed but I couldn’t have done anything else – I had a bunch of fouls, but that’s what I had to do; I had to go in strong, but it didn’t hold together.”

Germany enjoyed a great European Championships but all their success came in the field – until, that is, the women’s steeplechase on the final night.

Defending champion Gesa-Felicitas Krause was the favourite and she was content to sit in as Fabienne Schlumpf of Switzerland set a fast pace, passing 1000m in 3:05.79 although the pace slowed at 2000m in 6:16.32.

As they hit the last lap, Schlumpf led from Krause, with Karoline Grovdal and Luiza Gega still in with a chance.

As they approached the water jump, the German accelerated and the roar that went up was probably the biggest of the championships and she sprinted away for a two-second victory in 9:19.80.

To the additional delight to the Swiss supporters, who are probably the noisiest of all the visiting nations, Schlumpf was a clear second in 9:22.29 while Grovdal held off Gega to continue Norway’s superb championships in 9:24.46.

» Results can be found here. See the August 16 issue of AW magazine for full coverage from Berlin