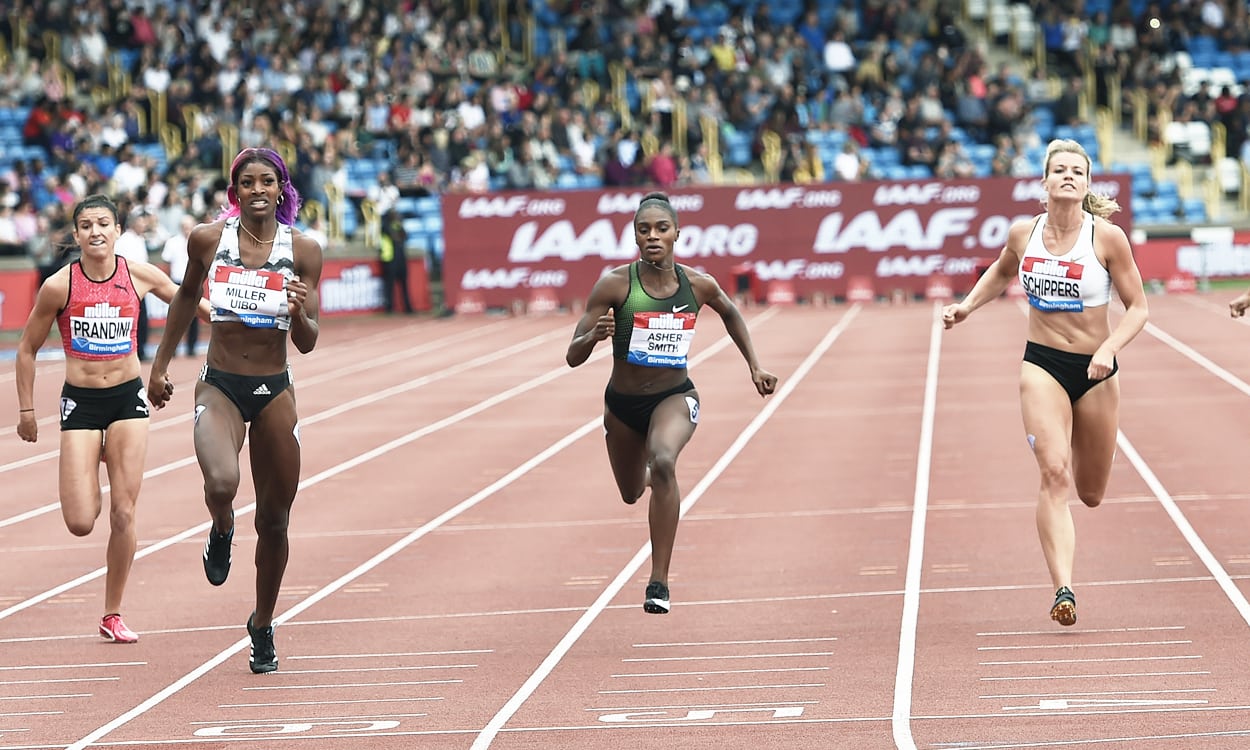 Shaunae Miller-Uibo won a much-anticipated clash against Dina Asher-Smith in the Diamond League at the Alexander Stadium on Saturday. The 24-year-old from the Bahamas cut a striking figure with her pink and purple hair and she pulled away from the recently-crowned European champion in the home straight to clock a meeting record of 22.15 to Asher-Smith’s 22.31.

Four months ago, Miller-Uibo beat Asher-Smith into third at the Commonwealth Games and in Birmingham the Olympic 400m champion again emerged victorious.

Asher-Smith, who broke UK 100m and 200m records in Berlin last week as she won three European titles, ran a great first 100m but the Bahamian was too strong in the second half of the race as Dafne Schippers ran 22.41 in third and Shericka Jackson 22.55 in fourth.

Miller-Uibo said: “Everything went really well, just as we planned. The main thing for me was just to have a great curve race and once I put myself into the race off the curve I used my 400 strength to power home. It was a really competitive race and everybody brought their A-game.”

Asher-Smith, who has spent this week fulfilling numerous post-Berlin media demands, said: “I’m tired, but I am happy I was able to come out and perform in such a stacked field, full of girls who, apart from me and Dafne, have been resting up.”

Muir said: “I’m happy with that despite the fact it was really windy. I just tried to give it my best shot but when I saw I was off the pace I knew it became about trying to just win the race and I did that.” 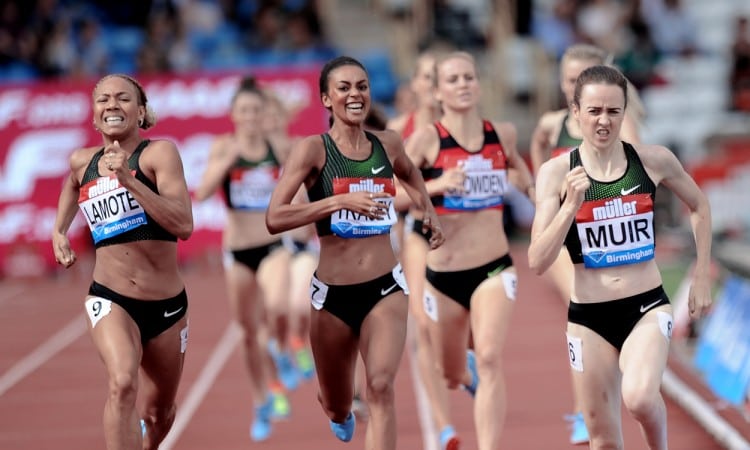 Caster Semenya was among several athletes to drop out on the eve of the meeting and certainly would have featured in the women’s 1500m, although she would have had to have been on the top of her game to beat Sifan Hassan.

A few days after her European 5000m victory in Berlin, the Dutch athlete began slowly but was well placed at the bell and outkicked Gudaf Tsegay of Ethiopia to win in 4:00.60.

Behind, Sarah McDonald’s fine late-season form continued as the 25-year-old Birchfield Harrier ran a strong last lap to take more than a second off her PB with 4:03.17 in fifth.

European champion Malaika Mihambo took long jump victory with 6.96m but the German had to work hard to hold off the challenge of triple jump specialist Caterine Ibarguen.

The Colombian, who enjoyed a 34-meeting win-streak in the triple jump during 2015 and 2016, leapt 6.80m but Mihambo jumped 6.82m in the fourth round before improving to 6.96m in the sixth and final round.

Brits filled the following three places but they couldn’t repeat their performances from the memorable British Championships earlier this summer.

Sandi Morris beat a host of big names in the pole vault but the event struggled to live up to expectations as the American won with a modest 4.62m. “We had really strong winds which were difficult to deal with but I’m happy I walked away injury free,” she said, “and I’m fortunate I could put some heights together.”

Runner-up Katerina Stefanidi of Greece cleared 4.52m, but there were disappointments for several other vaulters – Britain’s Holly Bradshaw was fifth with 4.40m, while neither Yarisley Silva, the 2015 world champion from Cuba, or New Zealand’s Eliza McCartney, who has a 2018 best of 4.94m this year, managed to clear a height.

“It was a bit of a shambles to come fifth in 4.40m,” said Bradshaw. “It was a massive headwind and all the girls struggled.”

In the 400m hurdles the European champion Lea Sprunger beat Commonwealth champion Janieve Russell with 54.86 as Britain’s Meghan Beesley was third with 55.83.

The women’s sprint hurdles saw a German one-two as Pamela Dutkiewicz took the win in 12.84 (-0.6) from Cindy Roleder (12.96) with Brits Alicia Barrett and Cindy Ofili – the latter on the comeback trail from injury – finishing fifth and sixth in 13.56 and 13.58.

There was further success for Germany in the shot put as Christina Schwanitz of Germany took victory with 18.20m as she beat the European champion Paulina Guba – the Pole throwing 17.92m.

In fifth, Britain’s Sophie McKinna put together a solid series and the 23-year-old was not far off her 17.76m PB with a best of 17.62m. “I’m a bit gutted I didn’t throw 18 metres because that is what I have been trying to do all season,” she said. “But I can’t complain. It was a stacked field and fantastic to be a part of it.”