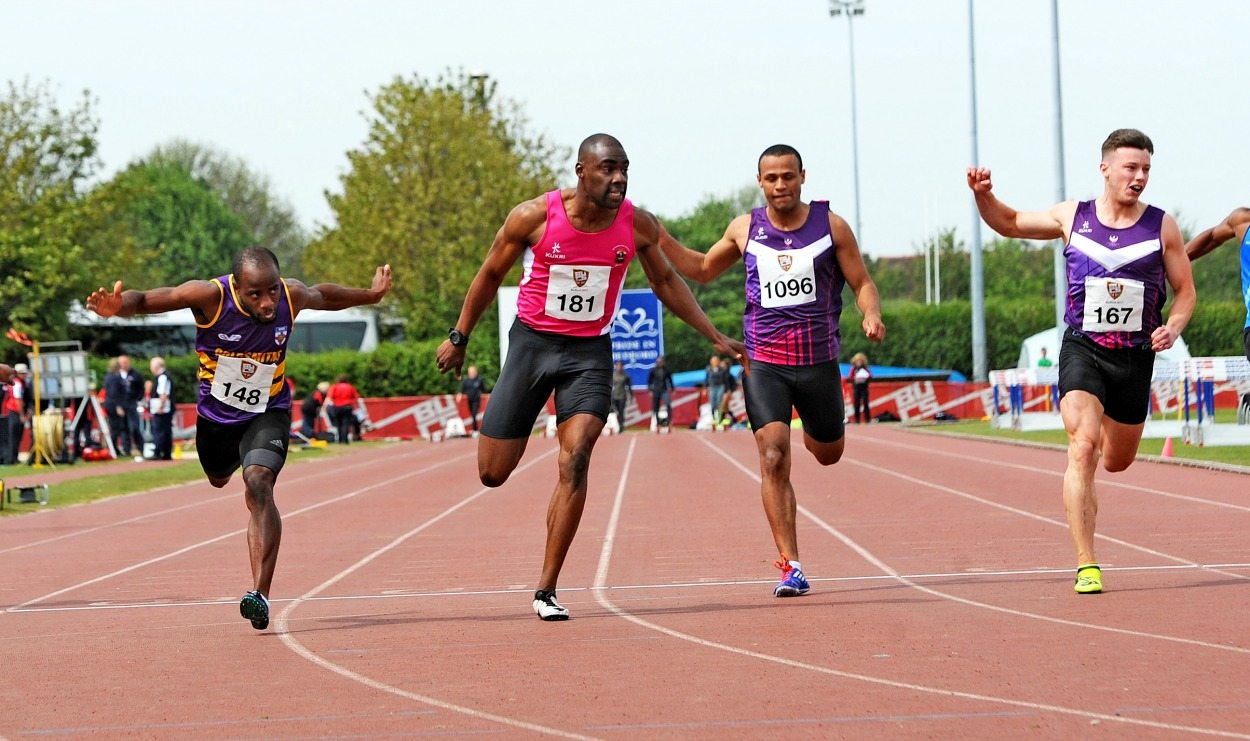 Records fall on day two of the BUCS Championships

A flurry of British and BUCS records fell in the field as sprint finals took centre stage on the track on the second day of the three-day 2017 BUCS Outdoor Athletics Championships, Nick Sargent reports.

Competing in windy conditions at Bedford, Reuben Arthur, from Goldsmiths, University of London (pictured, No.148), won the men’s 100m by two hundredths of a second in 10.75 from Nottingham Trent’s Samuel Oswea with Adam Thomas of Loughborough third.

The women’s 100m final, meanwhile, was more clear-cut as University of East London’s Corinne Humphreys, who qualified fastest in the semi-finals with 11.58, took gold in 12.08 from Brunel’s Lukesha Morris, who took the silver in 12.33, and Middlesex’s Diana Walker.

In the ambulant men’s 100m event, Zachary Shaw of Loughborough retained his BUCS title for another year, while Amar-Mazigh Aichou of Brunel took silver, and Morgan Jones of Cardiff Metropolitan the bronze.

Loughborough’s Kathryn Woodcock was the only student-athlete to automatically qualify for the women’s discus final with a throw of 46.28m – 1.28m over the qualifying distance. The shock of the event came when reigning champion, Amy Holder of Brunel, fouled out – resulting on her not progressing to the final.

Taylor Campbell of Loughborough set a championship record of 73.40m on his way to BUCS gold in the men’s hammer.

Cameron Chalmers of Bath continued his pursuit of his fourth consecutive men’s 400m BUCS gold by qualifying for Sunday’s final in the quickest semi-final time of 47.09. His nearest competitor, much the same as the BUCS Indoor Championships earlier this year, was Thomas Somers of Loughborough who qualified second quickest in a time of 47.57.

Following the men’s event, the women’s 400m athletes lined up for three heats of semi-finals. Among those qualifying in sub-55 second times and with a strong chance of winning medals on Sunday was Aberdeen duo Zoey Clark and Kelsey Stewart.

With the bar set at 5.25m in the men’s pole vault final, only three athletes remained: reigning champion Harry Coppell (Liverpool John Moores), Adam Hague (Sheffield Hallam), and BUCS indoor champion Charlie Myers (Northumbria). Unable to clear the height, Coppell had to settle for bronze, as Hague and Myers battled it out for the BUCS gold.

Myers was unable to clear the bar as the height moved up to 5.35m, although Hague went over in his first attempt to improve upon his silver from last year to leave with a championship record and a BUCS gold medal.

Loughborough’s Mary Elcock couldn’t retain her BUCS long jump title despite her best jump being 5.88m – 0.17m further than her winning jump in 2016. Instead, Elcock had to settle for silver as Northumbria student Lucy Turner took gold with a 5.92m jump, while Brighton’s Elise Lovell secured bronze with 5.81m.