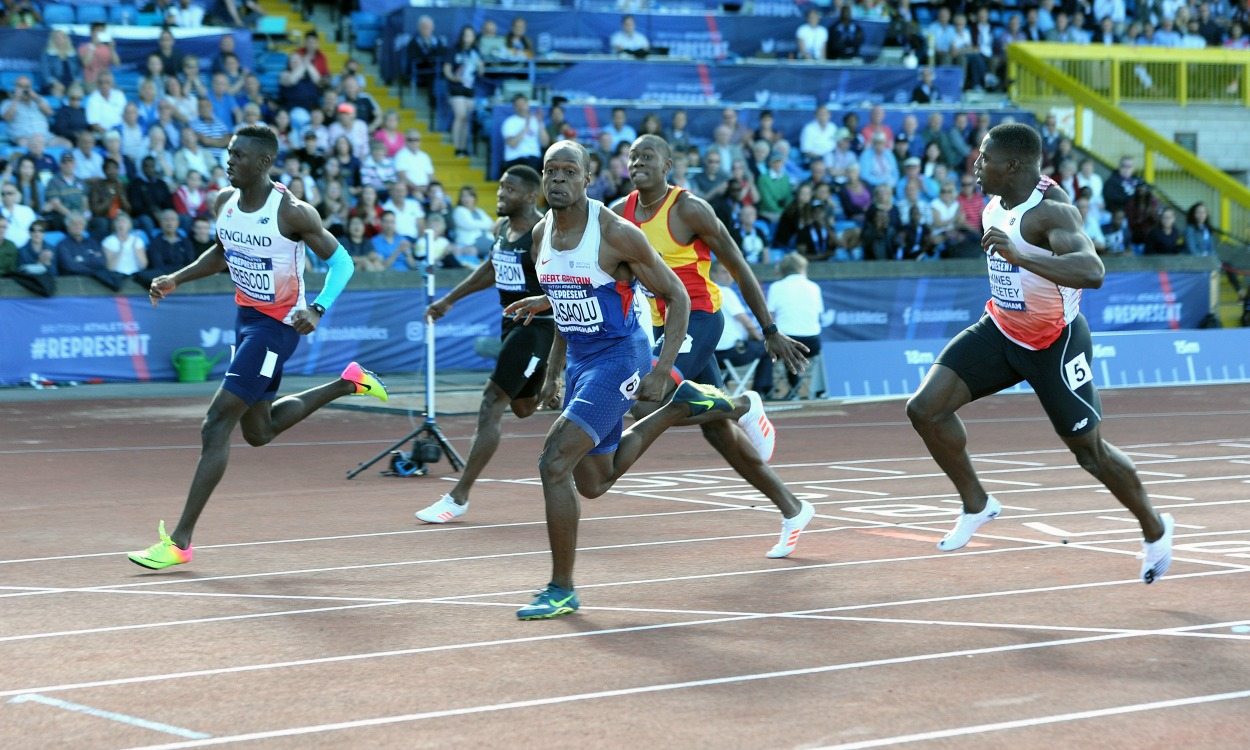 Reece Prescod has never raced in London’s Olympic Stadium, but he will now compete there for Great Britain at next month’s IAAF World Championships after sealing selection with victory in the 100m at the British Team Trials in Birmingham on Saturday.

“I went to watch the BUCS (British Universities) Championships just before the 2012 Olympics and I’ve spectated at the Anniversary Games, but I’ve never run there before,” he said.

The 21-year-old ran 10.09 in Birmingham on the first day of the two-day Team Trials to beat reigning champion James Dasaolu and Harry Aikines-Aryeetey.

Prescod’s training partner Ojie Edoburun was fourth, while the best-known member of their group, CJ Ujah, did not start in the final due to calf muscle cramp after earlier running a wind-assisted 9.98 in the semi-finals.

Back in the winter Athletics Weekly ran a multi-page feature on Prescod where we reported that his Jonas Dodoo-coached team felt “it is about time the wider British public knew the young sprinter’s name”.

During 2017 so far the 6ft 4in tall sprinter has gained further experience on the Diamond League circuit but taking the British title in Birmingham is a major step up for the youngster.

Like so many athletes, Prescod struggled initially to make the breakthrough to senior competition. “I had growing pains,” he told AW in Birmingham. “I was getting hamstring injuries and people ruled me out as they were saying ‘oh, he gets injured a lot’. So it was a tricky time for me but I had a good group of people around me.”

Were there moments of doubt when he was injured? “As an athlete, it’s natural to have doubts when you’re injured,” he said. “But I made sure I covered all the areas –  such as eating and sleeping well and doing all the little things right.”

He added: “I’m on the right track, for sure. But I’m taking things bit by bit and it might take a while for this win to sink in. I’m still pinching myself.”

Prescod was unsure on Saturday whether he will make his Olympic Stadium debut as soon as next weekend for the Müller Anniversary Games, but one athlete who seems certain to race there is Andrew Butchart.

The Scottish runner takes on Mo Farah in the 3000m at the Anniversary Games next weekend and he warmed up for the task on Saturday in Birmingham with a comfortable 5000m victory.

Andy Vernon made much of the early running but Butchart injected pace with four laps to go, immediately building a big lead before going on to win in 13:50.56 – with Vernon satisfied with his runner-up spot four seconds behind as Ben Connor, Marc Scott, Luke Traynor and Chris Thompson filled the next positions.

About one hour and 45 minutes later, Butchart returned to the track for the 1500m heats but he struggled on the final lap as Jake Wightman stretched away and Butchart faded to fifth place.

Ben Williams continued the fine form he showed in the previous weekend’s European Team Championships by winning the national title with 16.71m. The former world youth champion is still chasing the World Championships qualifying mark of 16.80m, though, whereas Team Trials runner-up Nathan Fox has jumped 16.81m this summer.

Earlier, Nick Percy won the first gold of the weekend when he took the men’s discus title with 60.78m from Zane Duquemin and Brett Morse. In the javelin, Joe Dunderdale’s first round effort of 73.58m was enough to take gold from Matti Mortimore and Joe Harris.

» For coverage of the women’s events at day one of the British Team Trials see our report here, while the July 6 issue of Athletics Weekly will feature 16 pages of photographs and reports