One-two for Hannah Cockroft and Kare Adenegan in Dubai 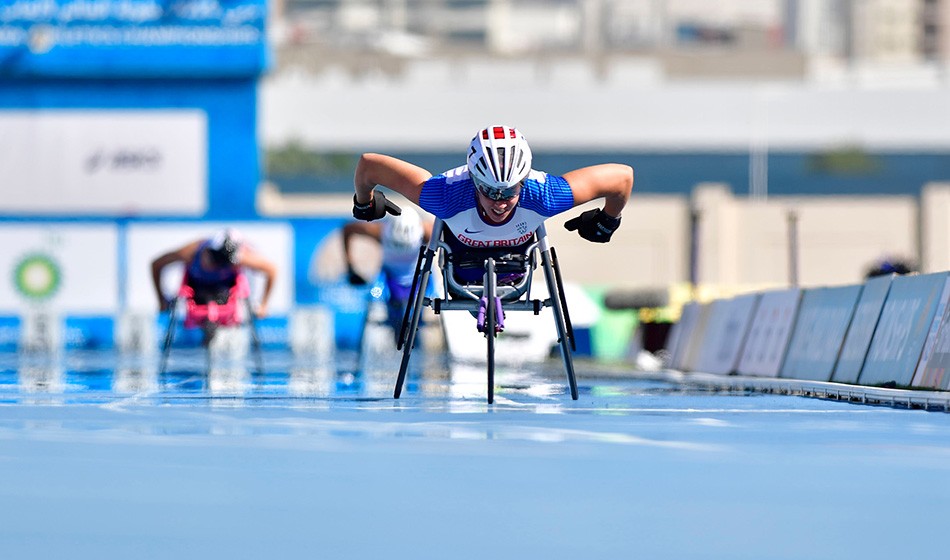 Hannah Cockroft stormed to her second gold of the World Para Athletics Championships in Dubai as she set a championship record of 1:57.27 in the women’s T34 800m.

Behind, Kare Adenegan made it a British one-two as she clocked a 2:01.32 PB to hold off Alexa Halko of the United States by three hundredths of a second in the battle for silver.

The race unfolded during the early hours of Thursday morning for Cockroft’s fans in the UK and on the penultimate day of the championships as she added to a GB medal tally and also the 100m gold that Cockroft won herself earlier in the championships.

Adenegan led the early stages but Cockroft powered down the back straight on the final lap and built on her lead as she surged away.

“The 800m is such a game. It is so tactical, and it is all about playing off the other girls’ strengths,” said Cockroft. “I thought, I don’t want to leave this until 100m to go, I knew Kare or Alexa could do anything then. I just needed to get out of a sticky place. My favourite event in the 400m so I knew I could hold the speed a little longer.”

After winning the T34 800m at the World Para Athletics Champs in Dubai, Hannah Cockroft talks to @stuartweir about her winter training plans and why the 400m is her favourite event. #Dubai2019 @HCDream2012 pic.twitter.com/PQcmCD5J3l

There was more success for Britain as Maria Lyle won the T35 women’s 200m in 30.33 by an almost two-second margin to add to the 100m title she won earlier in the week.

And Sabrina Fortune captured the F20 women’s shot put title as Thursday’s action came to a close with a 13.91m championship record.

“It shows how far I have come from last year when I was depressed and suffering with lots of anxiety,” said Lyle. “I now enjoy life and enjoy training and racing. So, from that perspective, it’s a really good achievement for me.
“The main focus of the 2019 was to get to the world championships, not about medals, so to do that and get two gold medals is the icing on the cake.”

Fortune said: “After two long long weeks of being here (in Dubai), I wanted to throw long. This is the best outcome I could ask for. This is one of the days I’ll remember for the rest of my life.”

The T61 men’s 200m final saw a battle of the generations with 17-year-old Ntando Mahlangu of South Africa running 23.23 to beat Britain’s 43-year-old veteran Richard Whitehead to the title.

Karolina Kucharczyk of Poland won the women’s T20 long jump with a world record of 6.21m as Britain’s Martina Barber, featured in AW magazine earlier this month, was eighth with 5.20m.