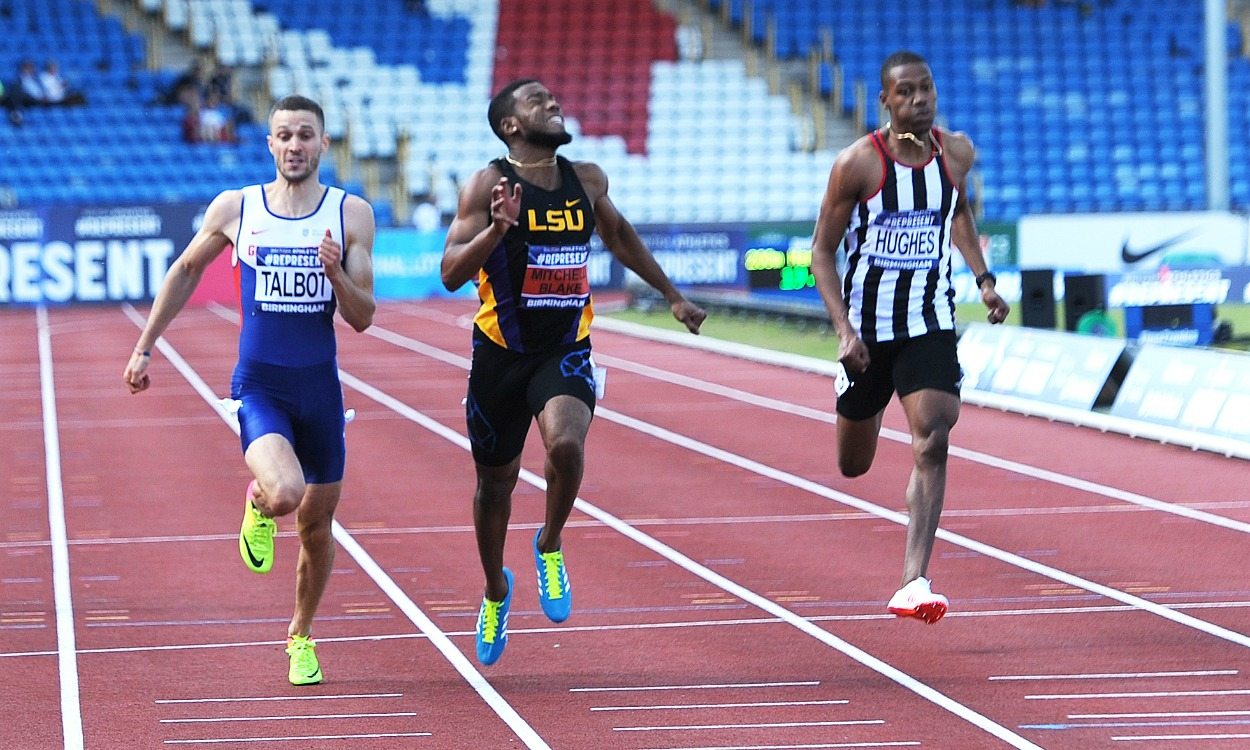 Regis’s mark of 20.25 had stood since the AAA Championships at Crystal Palace in 1987. But Mitchell-Blake clocked 20.18 in a high-quality 2017 national championships final that saw Danny Talbot and Leon Reid run PBs of 20.20 and 20.38 for silver and bronze, while Zharnel Hughes was fourth in 20.42 and Adam Gemili, who was fourth in the Olympic final last year, could manage only sixth after being troubled by an injury.

Amazingly, Mitchell-Blake was making his first competitive outing on British soil for 10 years. The 23-year-old was born in Newham and ran for Ilford AC as a child but his parents moved to Jamaica when he was 13 years old and he subsequently rose to prominence in the US collegiate system at Louisiana State University.

“This is the first time I’ve run in front of my home crowd and the experience is second to none,” he beamed after a victory that secured his selection for the IAAF World Championships in London. “I am so pleased I have the opportunity to do it again in London. It was a great field, it was the last event (on the programme at the Team Trials) for a reason, as everybody stepped up and hopefully we can do the country proud now in London.”

Asked if he was confident going into the World Championships, he said: “Why would I not be? I have an opportunity to showcase my talent in front of London and the world. I am going for it.”

He added: “My plan now is to recover and sit down with my coach (Dennis Shaver) to decide what is best between now and London. The aim is to get ready for August.”

Nowhere was the battle for IAAF World Championships selection more intense than the 1500m. In a slow, tactical race, Chris O’Hare – the oldest in the race aged 26 – showed his experience, tactical acumen and finishing speed to win in 3:47.28 as Josh Kerr pipped Jake Wightman for the runner-up spot.

Remarkably, the top three all grew up living and training in Edinburgh. In fact, with Neil Gourley in fourth it meant the top four places were taken by Scottish athletes, just ahead of reigning champion and Olympic finalist Charlie Grice, who finished fifth.

“It’s a good advertisement for Meadowbank and possibly renovating it,” said O’Hare, on the famous Edinburgh athletics arena, before adding that he nearly did not start due to a race day injury scare on his hamstring.

“I didn’t know if I’d start the race and then, on the start line, I wasn’t sure if I’d finish,” he said. “I spent most of my warm-up on the physio bench trying to get my hamstring ready to do some strides and when the race began I was lucky the early pace was slow.”

Elliot Giles won a similarly cagey 800m final as he outkicked Guy Learmonth and Kyle Langford for gold in 1:49.52 after the runners had passed halfway in a cautious 56.5. “I don’t think it’s in the style of the British runners right now to go out hard, so I expected it to be tactical,” said Giles, who added he prefers to concentrate on winning races in coming weeks rather than chasing the World Championships qualifying time of 1:45.90.

Andrew Osagie might have profited from a faster pace, though, as the 2012 Olympic finalist and fastest man in the UK this year was only fifth. James Bowness, too, disappointed in sixth place just a week after representing Britain in the European Team Championships, while seven-time British champion Mike Rimmer did not even make the final.

Earlier in the day the resurgence of race-walking continued when Tom Bosworth smashed the UK 5000m record, with Callum Wilkinson also breaking the old mark just minutes after Bethan Davies had set a women’s national record in the same event.

Bosworth and Wilkinson clocked 18:43.28 and 18:56.96 respectively as the Alexander Stadium, which was still filling up with spectators arriving for the day, cheered them home.

“No Brit has ever gone inside 19 minutes,” said Bosworth, “so to get two in one race is pretty special going into London.”

Wilkinson added: “To break 19 minutes for 5km is a real race walking target. It is a bit like the four-minute mile. So to get that at 20 years old is really impressive.”

Sixth in the Olympics 20km race walk last year, Bosworth is hoping to make the podium at the IAAF World Championships next month in London. But first he races over one mile at the Müller Anniversary Games next weekend in London.

The British record outdoor record is 5:58.4 (5:56.39 indoors) but Bosworth should have a great chance of cracking it as he race-walked his final mile in the 5000m in Birmingham inside six minutes. 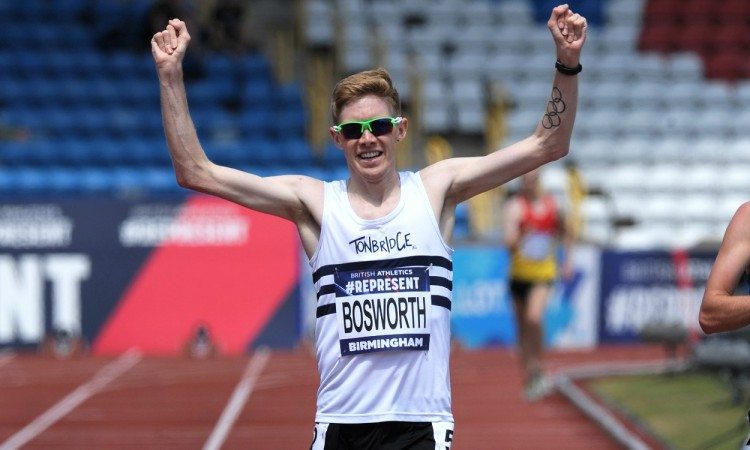 Jack Green looked strong as he blasted to 400m hurdles victory in 49.34. The 25-year-old sealed selection for London as he beat Jacob Paul and Seb Rodger.

In the sprint hurdles, meanwhile, David King took gold in emphatic style as he ran 13.55.

Another convincing winner on the track was Matt Hudson-Smith as the Birchfield Harrier stormed to 400m victory in 44.99. Winning by almost a second, he finished well clear of runner-up Rabah Yousif and third-placed Cameron Chalmers as former champion Martyn Rooney was down in fifth.

In the long jump only one athlete, Dan Bramble, went over eight metres but he did it twice with 8.02m firstly into a headwind and then with a legal wind speed. In the pole vault, Luke Cutts cleared 5.45m to beat Jax Thoirs and Harry Coppell.

The high jump, meanwhile, was won by Robbie Grabarz with 2.26m despite the fact he competed in the Paris Diamond League the previous night. “I love doing Diamond Leagues and the British Champs,” said Grabarz, “so I thought I had to do both this time.”

Not every British contender for the IAAF World Championships made the effort to compete in Birmingham but Grabarz showed how much winning a national title matters.

» Coverage of the women’s events can be found here. See the July 6 issue of AW for full coverage from Birmingham