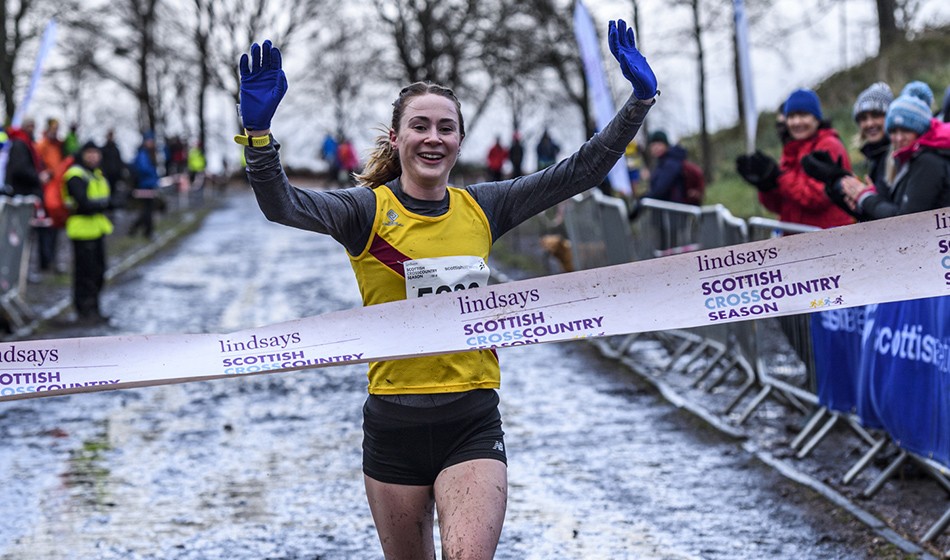 On a busy day of national cross-country championships, while the English National took place in Nottingham there were similar events in Scotland, Wales and Northern Ireland.

Mhairi Maclennan (pictured above) claimed her second Scottish cross-country title as she won the women’s crown while Jamie Crowe took the men’s title in gruelling conditions on a Falkirk course that was waterlogged in places, Peter Jardine reports.

Maclennan, who last won this title in 2018 and now runs for Preston, beat Annabel Simpson of Fife AC and Moira Stewart of Cambuslang as Fife won the team crown.

Crowe of Central AC justified his status as favourite for the men’s race with a fine win from Jonny Glen of Inverclyde AC and Kevin Wood of Fife AC. The winner also led Central to their 10th men’s team win on the trot.

“It was great to win gold for the second time in my career and especially after being fourth last year,” said Maclennan. “The conditions with wind, mud and sleet were so tough and really everybody who was out there and competed deserves a medal. It was a big field again for the senior women’s race and it is wonderful being part of that.”

Crowe said: “I felt nervous all week because people were saying I was probably the favourite. Those nerves worsened when the snow started in the first lap and at that stage you just want to get over the mud and get around. “But I managed to get away from Jonny, although not as early as I had hoped.”

Megan Keith took the under-20 women’s gold while Freddie Carcas won the under-20 men’s title – both juniors having won at the event 12 months earlier.

Hunt, the 2018 champion, had been a pre-race favourite, targeting the 116th edition of the event to regain the title from seven-time winner Dewi Griffiths. Hunt knew he was in great shape following a sub-14-minute clocking over 5km just over a week earlier and his game plan was to go of hard and maintain a pace that he hoped would burn off his rivals. 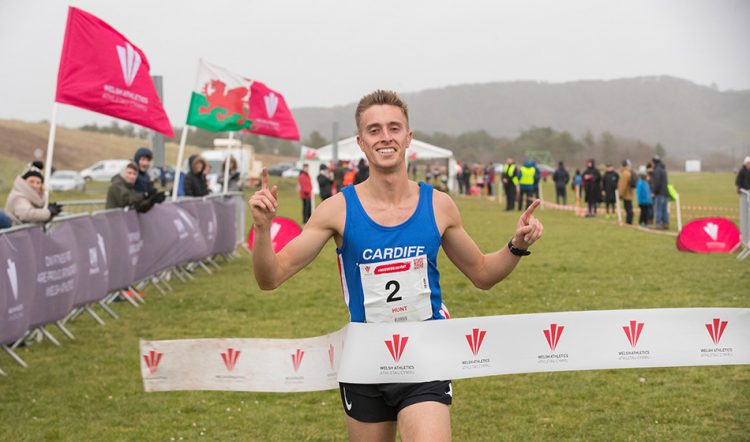 “Conditions were tough but I went off quite hard at the start and I saw the boys trying to tuck in so I started to push hard in different parts of the course,” said Hunt. “Dewi finally dropped off the group and I never looked back so I’m really happy with that.”

Wilkins was a convincing women’s winner, going one better than her runner-up spot from 12 months ago as she beat Lauren Cooper by half a minute.

“It was extremely windy out there but it was brilliant to come back,” said Wilkins. “Last year I came second so to come back and win today was a big aim for me.

“My long-term aim is to qualify Commonwealth Games marathon for Wales but I’m going to stay pretty chilled until then and see how I get on.”

Dominic Smith ran solidly to claim the under-20 men’s title ahead of Sam Roberts. There was a brave attempt by Lloyd Sheppard to run away from Osian Perrin in the under-17 men’s race but Perrin timed his bid for glory perfectly to retain his title. 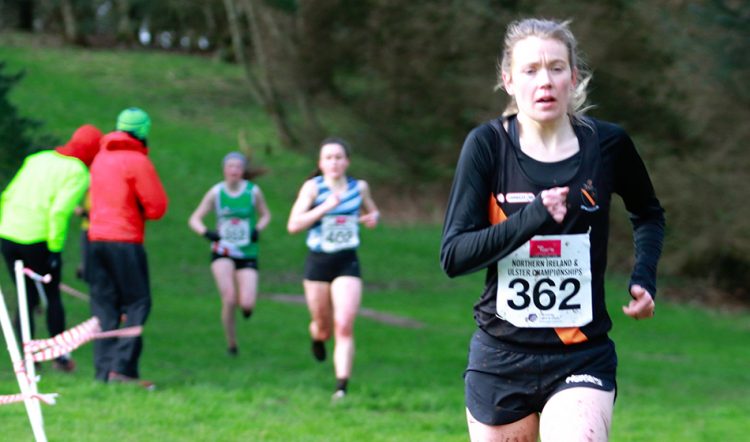 Apart from hail and rain, those winds also brought change as three of the four titles on offer went to different new winners as Neil Johnston and Emma Mitchell picked up their first provincial senior cross-country crowns.

An understrength North Down squad retained the women’s team championship to maintain the status quo but an impressive Newcastle AC halted City of Derry Spartans who were going for a four-in-a-row in the men’s race.