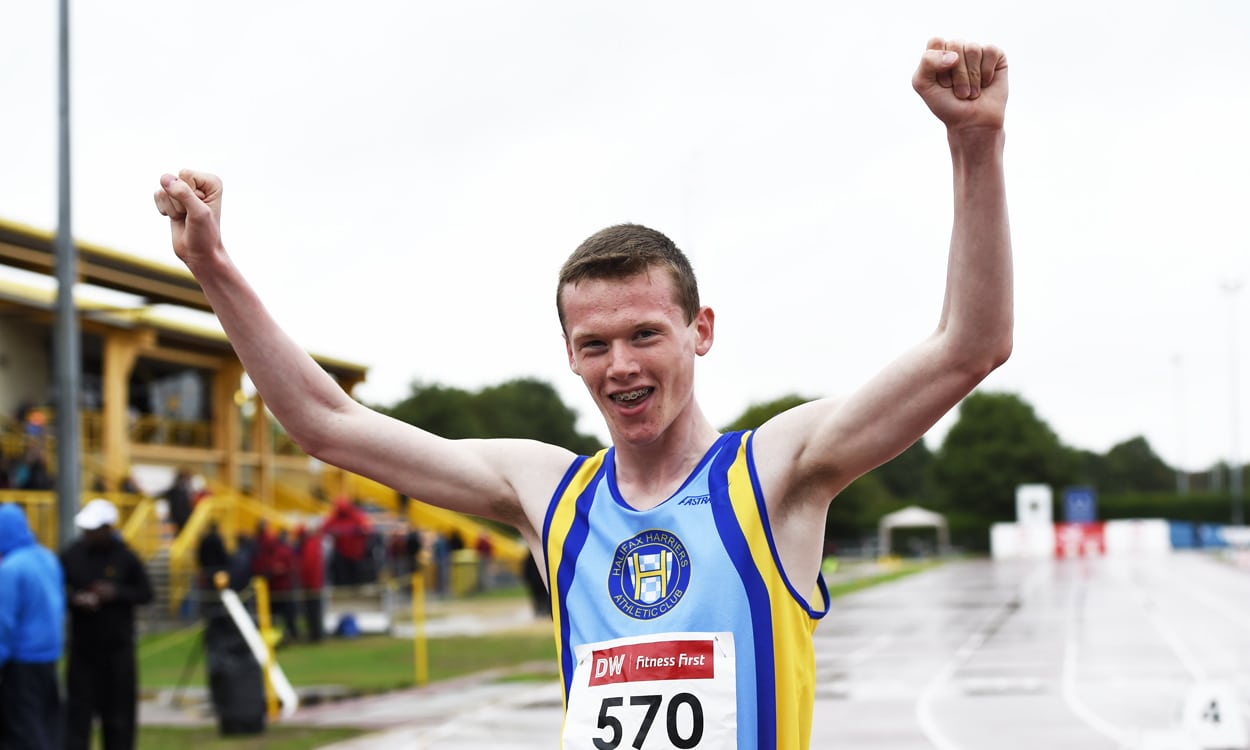 Miserable conditions on Sunday put a slight dampener on performances compared to Saturday’s high standards, but that did not stop European under-18 champions Max Burgin, Dominic Ogbechie and Keely Hodgkinson shining on day two of the England Athletics Under-17 and Under-15 Championships in Bedford.

Burgin was one of three athletes to set championship records on a day of almost constant and often heavy rain. Leading from the gun, he produced a dominant solo performance to clock 1:49.21 – more than a second inside his own meeting record.

Five minutes later, Hodgkinson won her under-17 800m in similar style, clocking 2:09.38 to defend her title. She had been out to break the meeting record of 2:05.07 but found the wind too strong.

European under-18 high jump champion Ogbechie showed his versatility once again as he took the long jump gold, his second title of the weekend. Just like on Saturday, when he cleared 2.18m to win the high jump, he did so with an outdoor PB, on this occasion 7.30m. It was 20cm short of the championship best and 23cm less than the UK age-group best he set indoors this year.

With a dominant performance in the under-17 1500m steeplechase, Morgan Squibb clocked 4:59.26 – just outside her PB and over half a second inside the championship record, finishing more than 17 seconds clear.

Under-15 girls 300m winner Jeslyn Agyei-Kyem was one of three athletes in her field to have run below the championship record so it was no surprise when she stopped the clock on the new figures of 39.96.

Kenneth Ikeji added to his under-15 boys title in last year’s event with gold in the hammer up an age group with 69.94m – a PB and UK lead for under-17 men.

European under-18 400m hurdles finalist Jasmine Jolly made light work of the rainy conditions as she took the under-17 300m hurdles in 42.99, short of her best but quicker than any other British athlete in her age group has recorded this year.

Max Law, who was fourth at the European under-18 Championships, was held back by the conditions to 65.43m – nearly 10 metres down on his UK lead – as he won the under-17 men’s javelin.

Remi Jokosenumi completed the under-15 boys sprint double, easing down to 22.91. The UK age-group best-holder had won the 100m in 10.84 on Saturday.

Doing likewise in the girls’ events was Sophie Walton, who held off Success Eduan to win the 200m in 25.49.

» News from the first day in Bedford is here. See the August 30 issue of AW for full coverage from Bedford