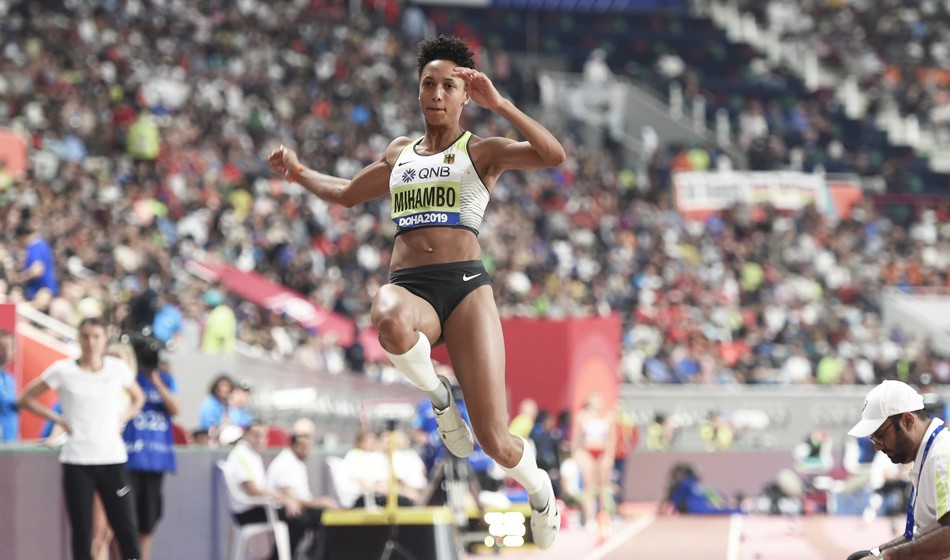 German destroys her rivals with giant 7.30m leap at IAAF World Champs in Doha as Abigail Irozuru is seventh

Malaika Mihambo came to Doha as the favourite for the long jump and she lived up to her billing as she killed the competition in the third round with a huge 7.30m effort.

For the German it was the third longest world championships mark in history and has only been beaten by Jackie Joyner-Kersee’s 7.36m from 1987 and 7.32m from 1991.

The 25-year-old began with a modest 6.52m and then a foul but soon got into her stride.

“I was trying to make a secure jump to get into the next round,” said Mihambo. “I was telling myself this next round will not be a foul. I was not trying to go for 7.30m but it just happened and I’m really proud and speechless.”

The victory was just as dominant as Yulimar Rojas’ triple jump win the previous evening. Behind Mihambo, Maryna Bekh-Romanchuk won silver with 6.92m and Ese Brume took bronze with 6.91m.

“That was so amazing,” said Mihambo, who added 14cm to her PB. “It was a difficult competition but I’m really glad I came through.”

She added: “I thought my physical condition would allow me to jump about 7.20m but my coach told me I could do more than that.

“Heike Drechsler left some really big footprints in Germany so it’s an honour to become the first German to win a global long jump title since her.”

What now for Mihambo? She is on a flight at 8.30am from Doha to Thailand to go backpacking and “discover the country” before returning to training to prepare for the Olympics.

Proctor said: “I was feeling good but my first jump was a foul. I was feeling really confident but because of the foul I lost confidence in my approach and that’s a very important part of the jump for me. So that played a role in my performance today unfortunately.”